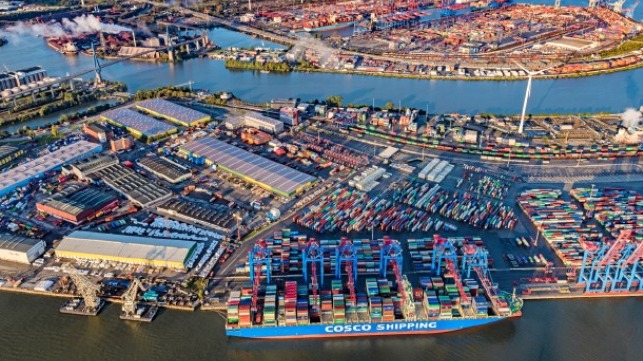 COSCO Shipping Ports, part of the Chinese state-owned shipping group, has entered into a strategic alliance with Hamburg’s leading container terminal operator Hamburger Hafen und Logistik AG (HHLA). Under the terms of the agreement, COSCO will purchase a minority stake in the HHLA Tollerort container terminal, one of three terminals operated by HHLA, with Tollerort becoming COSCO’s preferred hub for all of its European maritime operations.

Under the terms of the agreement, COSCO Shipping Ports will acquire a 35% minority stake in the Tollerort container terminal. It is part of the Chinese company’s strategy to build a global terminal network extending its current operations which include five terminals in China. As of June 30, 2021, COSCO Shipping Ports operated and managed 357 berths in 36 ports worldwide, including 210 for containers, with a combined annual handling capacity of 118 million TEUs.

Zhang Dayu, Managing Director of CSPL, said: “The Tollerort container terminal in Hamburg is a keystone of logistics in Europe and has excellent prospects for future development. We look forward to working with our partner HHLA to unleash the existing potential and further develop the terminal.

COSCO noted that the Port of Hamburg enjoys a solid geographical location and has abundant rear collection and distribution facilities, making it one of the most important shopping centers from Europe to China. The Tollerot terminal has four berths, including the capacity to handle COSCO’s largest vessels, 20,000 TEUs, and 14 container cranes. It also has a train station with a total of five tracks providing privileged access to domestic destinations.

HHLA expects the agreement to strengthen the relationship with its Chinese partner, as well as long-term planning security for the Tollerort container terminal and secure capacity and employment in the Port of Hamburg. With CSPL’s minority stake, CTT will become COSCO’s preferred transshipment point, where the flow of goods will be concentrated.

Angela Titzrath, chairman of the board of directors of HHLA, noted that the shipping industry is going through drastic changes. HHLA said it has worked with Chinese shippers for 40 years and hopes that by establishing this relationship, it can expand its operations to improve the interconnection in the logistics industry between China and Hamburg.

The Port of Hamburg recently reported that it began to recover mainly in the second quarter of 2021 from the impacts of the pandemic. In the first six months of the year, the port’s total cargo volume increased 3.8% to 63.5 million tonnes. They reported that the trend was also sharply upward for container handling in Hamburg with an increase of 5.5% to 4.3 million TEUs in the first half of the year. With a lead of more than six percent, handling of export containers at 2.1 million TEUs grew faster than imports which rose five percent to 2.2 million TEUs. According to HHLA, nearly a third of the containers handled in Hamburg originate in China or are destined for the Chinese market.