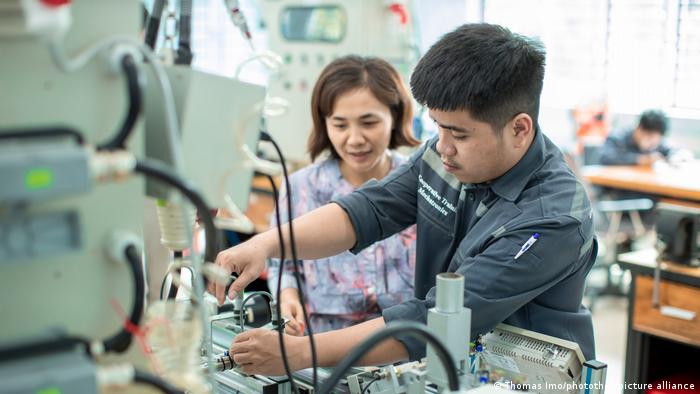 How Vietnam’s economy is benefiting from China’s pandemic policy

Vietnam was one of the few countries whose the economy grew during the coronavirus pandemic in 2020. Many say it was due to a rigorous action by the government and a zero COVID strategy that has long kept case numbers low.

However, in the summer of 2021, before the omicron variant changed the way countries approached pandemic policy, the the spread of the delta variant in Vietnam began to spiral out of control.

As infection rates rose, the factories of international companies like Samsung, Apple, Nike and Zara were forced to close during weeks.

The workers returned to their villages of origin in chaotic conditions. According to the World Bank, Vietnam’s annual economic growth fell to 2.58%.

“Vietnam has pulled itself together quite quickly, and that shows the adaptability of the Vietnamese system,” Daniel Müller, director of the German Asia-Pacific Business Association, told DW.

Meanwhile, nearly all coronavirus restrictions have been lifted in Vietnam.

The risk of further closures is low, said Dang Duc Anh, director of Vietnam’s National Institute of Hygiene and Epidemiology, according to Reuters news agency. The Asian Development Bank expects Vietnam’s economy to grow by 6.5% in 2022 and 6.7% in 2023.

Moving production to Vietnam from China

There are signs that Vietnam’s economy is benefiting from its modified pandemic policy.

Many companies, especially in the electronics industry, invest a lot of money. The South Korean electronics giant Samsung announced in February that it would invest an additional 920 million dollars (857 million euros) in Vietnam.

There is also a continuing trend of moving high-tech production from China to Vietnam.

Chinese electronics groups such as Luxshare Precision Industry, Goertek and Taiwanese iPhone assembler Pegatron are moving their facilities to Vietnam, according to the German electronics magazine. Electronic Praxis.

“Vietnam will be one of the biggest beneficiaries of changing supply chains,” Raphael Mok of consultancy Fitch Solutions told Reuters.

Müller of the German Asia-Pacific Business Association said Vietnam has “always been in the spotlight” of German business.

“The real race hasn’t started yet, but that could change now because corporate discontent in China has now reached a level that wasn’t there before,” Müller said.

China is attracting more and more criticism with its zero COVID policy and multi-week shutdowns that can be triggered by a relatively low number of infections.

The lesson confinementin the business and production metropolis of Shanghai has created global supply chain issues while factories and ports stand still.

Despite good prospects, there are also challenges for the Vietnamese economy. First, there is Vietnam deep integration into global supply chainswhich is both a blessing and a curse.

However, the downside is that Vietnam depends on the supply of raw materials and component products, some of which are missing or delayed due to the pandemic.

Vietnam is also vulnerable to growing geopolitical tensions between the United States and China.

Resilient supply chains are therefore essential for Vietnam’s continued economic strength. However, the country is not yet well enough positioned in this area, according to Müller.

But it is not just supply chains that need to become more resilient, but also the Vietnamese economy as a whole. For this, it is essential to have a broader base of value-added production, according to Müller.

“It requires greater professionalization at all levels,” he said, adding that Vietnam’s education and training system, for example, needs to improve. “At the moment it can barely keep up with the growing demand,” he said.

According to the World Bank, Vietnam’s foreign trade ratio was 209% in 2020, indicating a high level of economic dependence. With its population of just under 100 million, Vietnam cannot aim for economic development centered on domestic demand like China.

“In the first instance, it can only be a matter of balancing that to some extent,” Müller said.

Vietnam has recognized the problem, but is struggling to take the necessary steps to strengthen its consumer economy. Increasing domestic demand would require larger segments of the population to benefit from economic growth. However, inequalities are widening, as is the urban-rural divide, according to a March 2021 study in the specialist journal Savings.

Another challenge, especially with regard to investments from Germany and the EUis the authoritarian political structure of Vietnam.

In its coalition agreement, the current German government said it will pursue a “values-based foreign policy” that places greater emphasis on human rights.

Germany’s Due Diligence Act (also known as the Supply Chain Act) also places higher demands on companies when it comes to protecting the environment and human rights.

Although the law has been in force since 2021, it is only to be implemented after 2023, then first in stages and depending on the size of the company in question.

Vietnam is not a first choice partner in this regard, as evidenced by the EU-Vietnam Free Trade Agreement (EVFTA).

The agreement ratified in August 2020, however, its implementation continues to be delayed. For example, the agreement requires Vietnam to allow independent unions.

But the process is progressing only slowly. Nowadays, Vietnamese labor law does not regulate how and under what circumstances independent trade unions can be registered.

For now, it is clear that Vietnam cannot be included among like-minded partners in the context of a values-based foreign and trade policy, according to Müller.

However, Vietnam does not adhere to protectionist trade policies like China or the United States under former President Donald Trump. Its adherence to an open economy makes it “indispensable from a German and also European point of view” as a location for labour-intensive manufacturing, Müller added.

In this position, Vietnam holds a special place in Southeast Asia, he said.

This article has been translated from German

Elon Musk tops the list of highest paid CEOs. Here are the 5 best CEOs in the world by salary