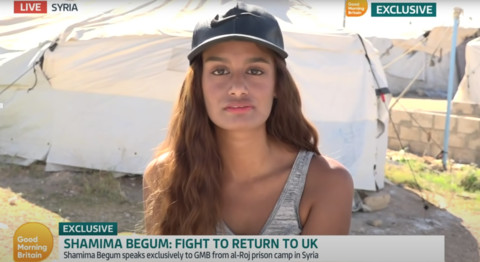 Should gender be a non-issue in the fight against terrorism in Europe, or are there valid reasons for a different approach to women returnees from conflict zones?

At the beginning of September, three Swedish women disembarked in Stockholm, expelled from Syria with their children. Two of the women were arrested, one on suspicion of genocide, war crimes and crimes against humanity. Their children were immediately taken into custody.

The scene has been familiar across Europe since the early 2010s, when large numbers of foreign fighters began joining – and later leaving – the Islamic State (ISIS, formerly ISIS) militant group.

Today, at least a thousand Europeans remain in detention camps in northeastern Syria. More than 600 are children. NGOs like the International Red Cross are urging Europe to bring them home, highlighting the dangerous living conditions in the camps. A majority of EU countries refuse, seeing them as threats to national security.

Women make up a large portion of those who return. But Islamist ideology promotes gender separatism and sees equality as a loathsome Western idea. If women were simple housewives in these groups, would they really be a threat in the home?

Dr Joana Cook is Assistant Professor of Terrorism and Political Violence at Leiden University and Senior Project Manager at the International Counterterrorism Center. Her latest book is A Woman’s Place: US Counterterrorism Since 9/11.

The roles of women in the Islamic State were very complex and multifaceted, she said. “We have seen individuals who could be both minors / wives or widows / mothers / victims / supporters / perpetrators. Women often played a multiplicity of roles in this world.”

At first, Cook saw repatriated women who were less ideologically motivated. But those who stayed to the end, going through the fall of the caliphate and the final stand of the Islamic State in 2019, were more likely to be invested in the group.

“This was not the case for all, but for some of the more extremist individuals – some of them remain in the camps today. The longer they stay in these camps in limbo, the more grievances the women ideologically engage. will deepen and get worse. “

Cook says she is frustrated with “problematic” accounts like that of the hapless “jihadist wives.” “It assumes a lack of agency among women; that they are victimized or tricked into going over the top. It undermines our understanding of the many women who have made independent decisions to join this group, or that the circumstances they’ve been in may be more complex than just an interest in marriage. “

Having their religious identity recognized and valued by the Islamic State was an attractive prospect for some, she said. â€œIt’s fascinating, because when I looked at internal documents like letters from women to other women in ISIS, they talk about being ’empowered’ by the rights they get under IS. – the right to wear religious symbols and to practice their faith as they see fit, for example. So they reframe these stories [of female empowerment] in a way that fits the ideology of ISIS. “

Not a uniform group

Cook says it’s critical to assess the risks they pose on a case-by-case basis. There are women in the camps begging their governments, â€œPlease take me home. I’ll go to jail, get me out of here. Some of them are unlikely to pose a danger to society, she deduces. However, Cook and his colleagues also see women who would.

“And that is exactly why it is imperative that this issue be addressed – proactively removing these European citizens and determining the best approach to deal with these people on a case-by-case basis.”

The case of Shamima Begum highlights the complexity of the return of women. Begum was a 15-year-old schoolgirl when she left her native London to join IS. She gave birth to three children in Syria, all of whom tragically died of illness or malnutrition.

This week, the 22-year-old appeared on British television, dressed in Western clothes, live from a camp in Syria that she says she desperately wants to leave.

Not everyone is convinced of Begum’s explanation that she made a stupid teenage mistake. Her classmates remember that she wore an ISIS badge at school and actively tried to recruit them.

Richard Walton, former head of counterterrorism at the Metropolitan Police, said Begum is a terrorist who has joined an enlisted organization and should be treated as such – and not as a “lost student on sabbatical in Thailand”. Begum was stripped of her British nationality.

Cook sees no problem in bringing women involved in terrorist activity to justice. “No, this is absolutely the right approach. Any woman who returns and has committed a crime should be held accountable for any criminal activity she has been involved in to the fullest extent of the law.”

But Europe needs to start thinking about what to do next, she says: “Reintegration, rehabilitation, de-radicalization. The right kind of support for these women, and the children who return with them, will be imperative in reaching out to these distinct populations. long-term. “

Rachel Briggs is an expert in foreign and security policy and, among other roles, chair of the board of directors of the Global Center on Cooperative Security. She recognizes that bringing back those who have been involved in or associated with militant groups poses many risks, but says the risks are just as serious if European countries leave them behind. â€œIf not more serious, given recent developments in Afghanistan. Not everyone who went to Syria ended up fighting. . Many are likely to have created networks that offer an opportunity, if they wish to engage in conflict at home or elsewhere. “

Whether or not they have personal combat experience, returnees will very often have access to people with skills, equipment and experience, she said.

As to whether extremist women are less dangerous than their male counterparts, Briggs is clear: â€œAnyone who underestimates women does so at their peril. Women who went to Syria were not on the front lines, as their ideology prevents them, but this is not uncommon with women in leadership positions in terrorist groups. Just look at Baader Meinhof in 1970s Germany or many of today’s Latin American guerrilla groups. “

Organizations such as the Islamic State are most visible as perpetrators of terrorist attacks and other acts of violence. But they depend on a large support network, a community around them of non-combatant people who keep the infrastructure in place, Briggs explains. “So women without combat skills can still play a role in sustaining conflict.”