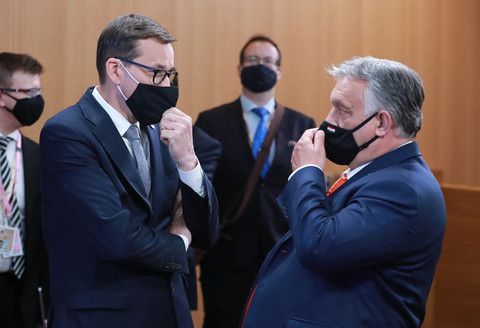 The European Commission has declared that “war” rhetoric has no place in Europe, following an interview with the Financial Times by Polish Prime Minister Mateusz Morawiecki.

The reaction came after the Polish prime minister, in an interview with the Financial Times newspaper, described the commission as being on the way to war against Warsaw.

He referred to images of the EU wielding a “gun pointed at the temple” and warned the commission against the outbreak of “World War III” by withholding billions in stimulus funds.

The long-running dispute between Warsaw and the EU over the judicial independence of Polish courts came to a head when an October ruling by the country’s controversial highest court called into question the rule of EU law .

The standoff with the commission has delayed the approval of some € 36 billion in a Covid-19 economic stimulus package for Poland.

The European Parliament, in response, adopted a resolution describing the Polish decision as an “attack on the European community of values ​​and laws as a whole”.

The parliament also disagrees with the European Commission for more action and wants it to trigger a “rule of law mechanism” to funnel billions of other EU funds to Poland for undermining the rule of law.

But he also accused the Brussels executive of dragging out the conflict, allowing the Polish government led by the conservative nationalist Law and Order (PiS) party.

Parliament Speaker David Sassoli has since announced that Parliament is preparing legal action against the commission.

“EU member states that violate the rule of law should not receive EU funds,” he said in a statement.

“Last year, Parliament fought hard for a mechanism to ensure this. However, so far the European Commission has been reluctant to use it,” he said.

But Poland also has friends ready to stand up for it.

Lithuanian President Gitanas Nauseda recently warned against tying the rule of law to EU funding, after meeting with his Polish counterpart.

And over the weekend, Hungarian Prime Minister Viktor Orbán took a more provocative stance, in a speech commemorating the 1956 uprising against the Soviet Union.

Kicking off what should be his campaign ahead of the April 2022 general election, Orbán used combative language accusing the EU of possibly interfering in the upcoming elections and supporting the opposition.

“They [opposition parties] were competing to see which of them could rule over the Hungarians by the grace of Brussels and George Soros as governor in Hungary […]”, he said of the recent collective opposition primary, where voters chose conservative Péter Márki-Zay as Orbán’s challenger.

Orbán has painted the Hungarian-born American billionaire George Soros as his nemesis for years.

“They openly say that in order to regain power, they will even join forces with the devil. Their goal is to take Hungary from Mary’s hands and put her at the feet of Brussels,” Orbán said.

He also spoke of Hungary being on God’s side of history in the face of defeated enemies of the past, and then drew parallels with the European Union.

“Today, the words and actions that Brussels addresses to us and to the Poles are like those usually reserved for enemies,” he said.

His Minister of Justice Judit Varga also compared the Soviet Union to the European Union.

“We remember the Hungarian freedom fighters who clashed with Soviet tanks in the streets of Budapest. We said no to the Soviet empire and we say no to # imperial ambitions of #Brussels,” she tweeted. .

Hungary is expected to receive more than € 7 billion in grants under the EU’s coronavirus response fund, representing around 5% of its GDP.