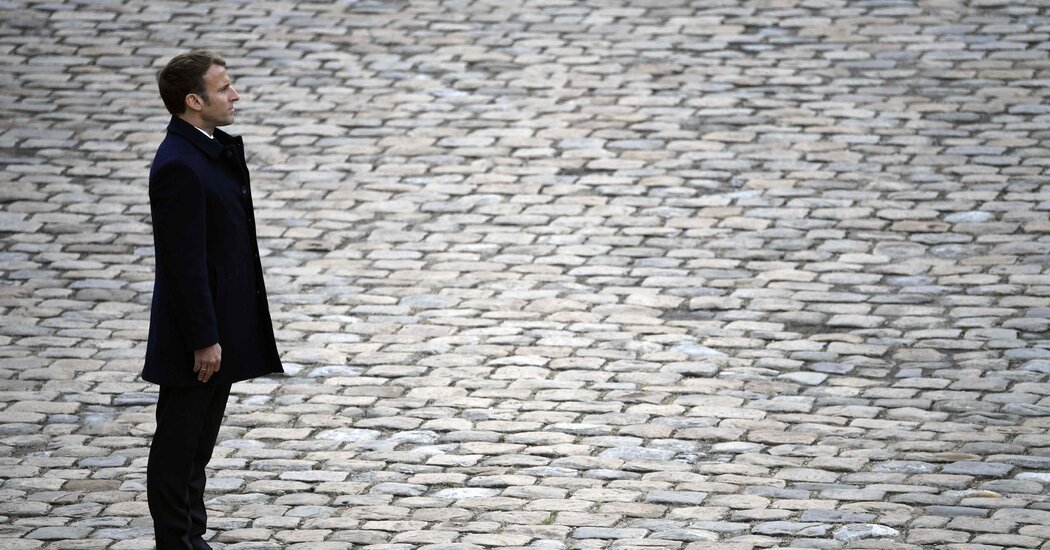 PARIS — Around a table much smaller than the 6-meter-long oval slab through which he faced President Vladimir V. Putin in Moscow, President Emmanuel Macron gathered a few journalists this week to confide that the crisis in Ukraine was taking “more than half of my time, most of my time” because the world is at “a tipping point” in history.

The table was about six miles in the air on the presidential plane that took Mr Macron to Moscow, Kiev and Berlin this week, where he warned of ‘irreversible’ damage if Russia invaded Ukraine , and said it was imperative “not to surrender to fate.

Mr Macron is convinced that the current crisis, marked by Russian revanchism after its perceived humiliation by the West, reflects a failure to rethink Europe’s collective security after the end of the Cold War. On that, at least, he and Mr. Putin seem to agree. The formidable task facing the French president is to determine what could possibly replace him and convince others, including the United States, of his virtues.

At the end of the week, the clash with Russia, which has conducted military exercises all around Ukraine’s borders, looked more threatening than ever. Yet just nine weeks from a presidential election, Mr Macron has taken a risky gamble that he can coax Mr Putin into dialogue and that French voters will be more seduced by his global stature than alienated by his inattention.

If he fails, he risks not only losing their voices and their confidence, but also damaging his prestige and that of his country by being seen abroad as an overly ambitious leader.

Wary of this perception, he went to great lengths to coordinate his efforts with other European leaders, some of them skeptical, and with President Biden. A 75-minute conversation Friday between Western leaders showed a united front behind attempts to persuade Russia “to defuse the crisis and choose the path of dialogue”, the European Commission said.

Mr. Macron was 11 when the Berlin Wall fell. Mr. Biden was 46 years old. Some divergence of views is probably inevitable. Mr Macron sees no reason why the alliance structure that prevailed over the Soviet Union should last forever.

“The question is not NATO, but how to create a safe zone,” he said. “How do we live in peace in this region? Part of his goal in Moscow, he suggested, had been to steer Mr Putin away from a NATO obsession – that Ukraine should never join the alliance – to another “framework”. . He said he told the Russian leader that “the framework you are proposing is wrong.”

To appear at the Kremlin, facing the one who pointed the gun at the temple of the West with 130,000 soldiers massed on the Ukrainian border, was necessary, argued Mr. Macron. The opening of another diplomatic channel, more flexible than the exchange of letters between Russia and the United States which Mr. Macron has repeatedly rejected as unnecessary, has bought time by blocking appointments in the coming weeks. The two leaders are expected to speak again on Saturday.

Understanding Russia’s relationship with the West

Tension between the regions is rising and Russian President Vladimir Putin is increasingly willing to take geopolitical risks and press his demands.

For more than five hours on Monday, the two leaders clashed. Mr Macron said he hammered home “the guarantees he could give me about the situation at the border” so much that Mr Putin said at one point he was “tortured”.

Mr. Putin, with equal insistence, attacked NATO’s eastward expansion since 1997 and the aggression it constituted.

The Kremlin disputed that Mr Macron won any concessions, but said there were ‘seeds of reason’ in his approach, unlike the attempt at British diplomacy, which was rejected by the Russian foreign minister , Sergei V. Lavrov, like a conversation between “the mute and the deaf”.

What Mr. Macron’s new security framework for Ukraine and Europe might be is unclear. But it seems that he would somehow offer Ukraine absolute guarantees of its sovereignty and independence in a way that would leave NATO membership as a mirage, because he would have simultaneously convinced Russia that the Ukrainian security had not been strengthened at the expense of that of Moscow.

Indeed, Mr. Macron believes that a sleight of hand is conceivable that would leave both Ukrainians safe and free to look to the West for their future, and Mr. Putin free to continue to think that the two countries form a “historical and spiritual space”. as the Russian leader put it in a 5,000-word dissertation on “the historical unity of Russians and Ukrainians,” published last summer.

It is a hybrid concept, but not atypical of its promoter. Over the years, Mr Macron has become known as the president “at the same time” for his constant juggling between different sides of the issues – first in favor of reducing France’s dependence on energy nuclear, now in favor of his augmentation – and for his complex dissection of issues that sometimes leaves observers wondering what he really believes.

That he believes passionately in the European Union and in the development of Europe as a more independent power is indisputable. It’s a question he’s never shied away from, and now he seems to think the time has come to settle that belief.

At least, with German Chancellor Olaf Scholz meeting Mr. Putin in Moscow next week, Mr. Macron has made Europe count in this crisis, alongside the United States. That’s more than can be said for Britain.

“Through its major states, Europe has returned to a stage from which it seemed to have been marginalized,” commented Michel Duclos, former French ambassador, in an article published this week by the Institut Montaigne.

Mr. Macron has had to work hard to keep dodgy European states, especially those that once lived under Soviet rule, aligned with his diplomatic efforts. With France currently holding the rotating presidency of the Council of the European Union, he has tried to reach out to everyone – one of the reasons his days are consumed by Ukraine.

For now, Mr Macron is leading in the polls, which give him around 25% of the vote, with three right-wing candidates behind him and splintered left-wing parties far behind. Among rivals to his right there is strong support for Mr Putin’s strongman image and his denunciation of Western “decadence”, so engagement with the Russian leader also serves Mr Macron politically.

Although he is the favorite to win, the likelihood of a high abstention rate among the politically disenchanted French and the strong appeal of the far right make Mr Macron’s re-election all but certain. If Mr. Putin ignores his diplomacy and invades Ukraine, all bets will be off.

Eric Zemmour, the far-right insurgent in this election, said last month that Mr Putin “must be respected”, adding that “Putin’s claims and demands are completely legitimate”. He also said: “I think NATO is an organization that should have disappeared in 1990.”

“By trying to violate this sphere of influence,” she added, “tensions and fears are created, and the situation we are witnessing today is undermined.” Ms Le Pen refused to sign a statement released last month by far-right parties meeting in Madrid because she was critical of Mr Putin.

Their positions demonstrate the chasm that separates France’s far-right admiration of Mr. Putin from the commitment of Mr. Macron. The French president’s conviction that Russia must be part of a new European security architecture is accompanied by a determination that Ukraine maintain its sovereignty.

If Mr. Macron aroused unease with his criticism of NATO, he held firm not to give in to the demands of the Russian leader.

When asked when he would turn his attention to declaring his candidacy, Mr Macron replied: “I will have to think about it at some point. You can’t do things too hastily. You need the right time.

If he doesn’t find that sweet spot, Mr. Macron’s diplomacy, and his ideas of reinvented European security, may come to naught. What may be feasible in a second five-year term at the head of France will certainly not be by April 24, the date of the second round of the election.

World leaders talk about wind propulsion at One Ocean Summit