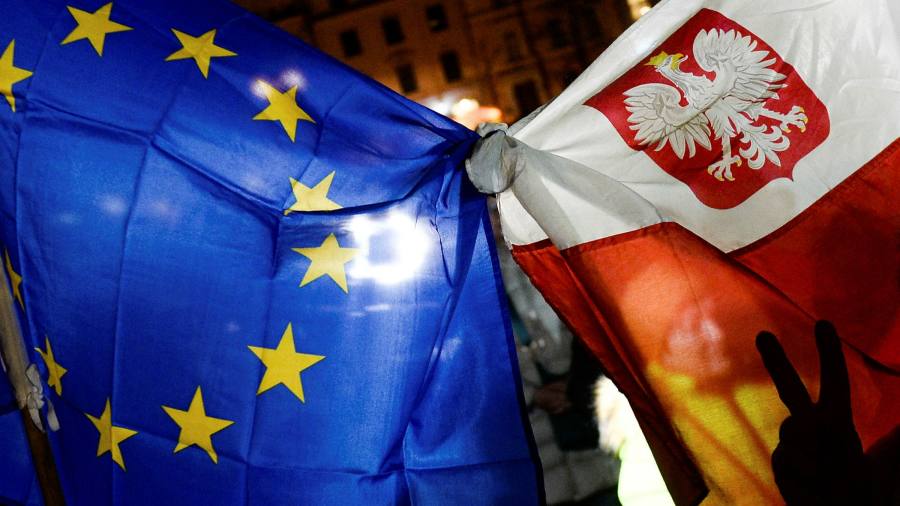 Poland’s ruling party has proposed a bill to amend a disputed disciplinary chamber for judges, in a bid to defuse a long-running row with Brussels over the rule of law.

The chamber was ruled illegal by the EU’s highest court and became a flashpoint in a dispute that has seen Brussels withhold billions of euros in funding from Warsaw.

However, amid growing tensions in neighboring Ukraine, there have been indications that Poland is looking for ways to ease its standoff with Brussels. Last week, President Andrzej Duda outlined his own plan to change the disciplinary system for judges, warning that Poland “didn’t need this fight” in light of “shocks on the international scene”.

According to the proposal put forward by MPs from the ruling Law and Justice (PiS) party on Friday, the disciplinary chamber would continue to exist, but would no longer deal with cases involving judges, but only those concerning other legal professionals.

Disciplinary cases involving judges would be handled by panels of three or seven judges drawn by lot from among the members of the Supreme Court.

The law would prevent judges from being sanctioned for the content of their decisions and provide for the reinstatement of those already suspended for this reason, except in cases where the decisions are the result of “serious and totally inexcusable conduct on the part of the judge”. . ”.

The standoff between Brussels and Warsaw over the rule of law has led to a stalemate over Poland’s bid for a €36 billion tranche of the EU’s NextGenerationEU recovery plan. European officials have said Poland should scrap the disciplinary chamber, change its rules and reinstate dismissed judges as conditions for approving Warsaw’s request for pandemic recovery funding.

Duda’s recent opening was hailed in Brussels as a step forward, following failed efforts to address EU complaints about judicial independence in Poland, but was not considered as sufficient to release the frozen funding.

Officials are likely to take a similar view on the latest offer, which could lay the groundwork for more intensive dialogue on Poland’s stimulus package even if it’s not enough to meet the conditions set by the committee.

Daniel Freund, a Green MEP from Germany, said the latest bid was “a step in the right direction” but warned there was a long way to go.

He said: “The conditions are clear. The independence of the judiciary must be restored, unduly dismissed judges must be reinstated and the judgments of the ECJ must be fully implemented. Only then can RRF funds be released.

To become law, the bill would have to be approved by the Polish parliament. However, it is unclear whether he would be backed by junior PiS coalition partner United Poland, which is led by hawkish justice minister Zbigniew Ziobro.

Ziobro pushed for a more confrontational approach from Brussels and worked on his own bill amending the disciplinary chamber. Without the United Poland votes, the PiS would need the support of opposition lawmakers to pass the bill.

An EU official said the proposal represented “a step to address issues related to the independence of the judiciary” and as such was a positive development.

But the official added: “It is too early to say whether this satisfactorily addresses the three main issues we have identified. And of course, none of this means much unless and until there is an adoption by the Polish legislator.