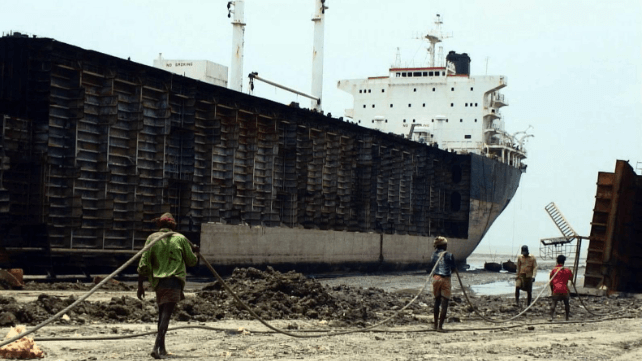 A report commissioned by maritime industry trade group BIMCO highlights that while Europe’s list of approved ship recycling facilities continues to grow, new additions have not added significant capacity to meet the demands of the global shipping industry. In a controversial move due to the environmental and safety track record of Asian shipbreaking facilities, the trade group is calling for increased recycling capacity to meet industry demands focusing on adding facilities outside of the EU.

“Today, there are still no facilities from major recycling states such as India, Bangladesh or Pakistan on the EU list to meet the demand for larger ship recycling. “, says David Loosley, General Secretary and CEO of BIMCO. “We believe the focus on adding some of these facilities to the list should be increased if they meet the standards of the Hong Kong Convention, which we believe should be ratified as soon as possible.”

BIMCO claims in its new report that many shipyards in Asia and neighboring regions have made considerable efforts to modernize their facilities. They also argue that the audit system under EU regulations is working, citing that two Turkish shipyards were delisted in September for failings. BIMCO is pleased to note that the EU audit system is working as intended to identify failures in auditable systems and respond with punitive action if necessary, the group says while asserting that the audit system is also working for non-European recycling facilities.

Environmental groups such as the NGO Shipbreaking Platform, however, claim that shipbreaking in South Asia “uses unsafe and unsustainable practices that are dangerous to the environment and workers at the dismantling sites as well as surrounding communities. “.

Every year, about 800 large ocean-going vessels are dismantled, and about 75% of them end up on one of the three beaches in South Asia, Chattogram in Bangladesh, Alang in India and Gadani in Pakistan, reports the NGO. Shipbreaking Platform. Between April and June 2022, they report that 143 ships were dismantled worldwide, 65% of them to South Asia. The BIMCO report says shipowners around the world continue to “swap flags” using various methods to remove ships from the EU with stopovers like in the Persian Gulf region before heading to Asian scrapyards. India, for example, has stepped up efforts to return ships arriving with false identities, but is accepting ships that have been swapped with intermediaries to meet EU requirements.

BIMCO cites the growing need for approved recycling facilities for large ocean-going vessels as the industry begins the planned transition related to the effort to comply with new regulations and reduce carbon emissions. The report highlights the strategic importance of ship recycling in the overall EC strategy, saying it is becoming increasingly clear and important. According to the EC, the “European New Green Deal” and supporting circular economy are key elements of its focus and spending for the foreseeable future. ??

According to BIMCO, facilities in EU member states generally only provide local, tailor-made solutions to a niche recycling market or focus on offshore dismantling. “This means that they are not dedicated to recycling large ocean-going vessels and therefore do not have sufficient capacity,” they write in the report.

The report shows that currently Turkey is the only major ship recycling country to contribute significant capacity to the EU list. Although there are efforts to develop new recycling facilities in Europe, these are mainly niche markets as the majority of tonnage continues to be handled at yards in South Asia. BIMCO believes it is essential for the EU to expand capacity by recognizing industry needs and trends.

Composite materials for a circular model