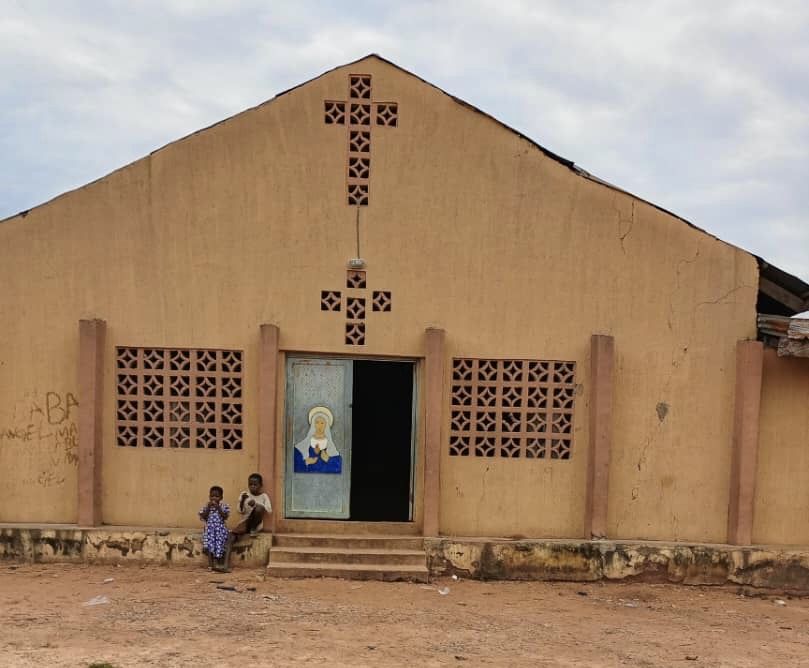 Nigerian authorities have taken a stance of little to no intervention, according to the Bishop.

“At least three Catholic priests have been kidnapped in Nigeria since July: Father Peter Udo of St. Patrick’s Catholic Church in Uromi; Father Philemon Oboh, St. Joseph Retreat Center, Ugboha; and Father Peter Amodu of Holy Ghost Parish, Catholic Diocese of Otukpo,” Bishop Anagbe continued. “In all the above cases, nothing serious was heard for [have] happened to the authors.

This observation was similar to what Father Iorappu told CNA about the recent attacks in Yelewata.

“The Nigerian army is there, and even has a checkpoint at the entrance to the city, but it is compromised,” Iorapuu said.

In the displaced persons center of Gbajimba, (pronounced ba-JIM-be) 40 km east of Makurdi, the community of Saint-Athanase school is recovering from the murder of the school principal’s husband on 8 october.

The town lies within the Guma local governance area and is a hub for hundreds of surrounding abandoned villages. The city hosts nearly a million internally displaced people who are prevented from returning to their farms for fear of armed terrorists who might ambush them, Iorappu said.

Two parishioners who went to their fields to collect cassava or yams were murdered on Saturday, according to Iorapuu. The victims were Amos Shemberga, husband of the school principal, and his friend, Thomas Ger.

“The people of Gbajimbe are hungry and they are being careful to scavenge unharvested vegetables,” Iorappu said.

Terrorists are besieging Gbajimbe, the hometown of Governor Samuel Ortom, to punish the governor for enforcing the law banning open grazing in the state, Iorappu told CNA.

At Catholic News Agency, our team is committed to reporting the truth with courage, integrity and faithfulness to our faith. We provide news about the Church and the world, seen through the teachings of the Catholic Church. When you subscribe to the CNA Update, we’ll send you a daily email with links to the news you need and, occasionally, breaking news.

As part of this free service, you may receive occasional offers from us on EWTN News and EWTN. We will not rent or sell your information and you can opt out at any time.

“I have been observing this process of ethnic alienation forced by terrorism for 20 years,” he said. “Their goal is to win people over to leave the area. They destroy the churches. Those who remain will have to convert to Islam.

Yelewata, the scene of the October 12 attack, is no stranger to terror attacks, Iorapuu said.

“Yelewata, being a border village, has been the target of attacks for a long time, including the burning of churches, which prompted the army to be sent to protect the population,” Iorapuu wrote. “However, the situation has improved and people who had taken refuge in safer areas have started to return for the agricultural season.”

“With these new attacks, many rushed to St. Joseph’s Catholic Church and Primary School, but many more were seen heading towards Daudu town and Makurdi,” he continued. “Daudu has the highest concentration of internally displaced people [IDP]; the first IDP camp here was established by the Diocese of Makurdi in 2001.”

“[At this time]no relief materials were provided to the thousands of displaced people and no arrests were made and no official response from the federal government,” Iorapuu told CNA.