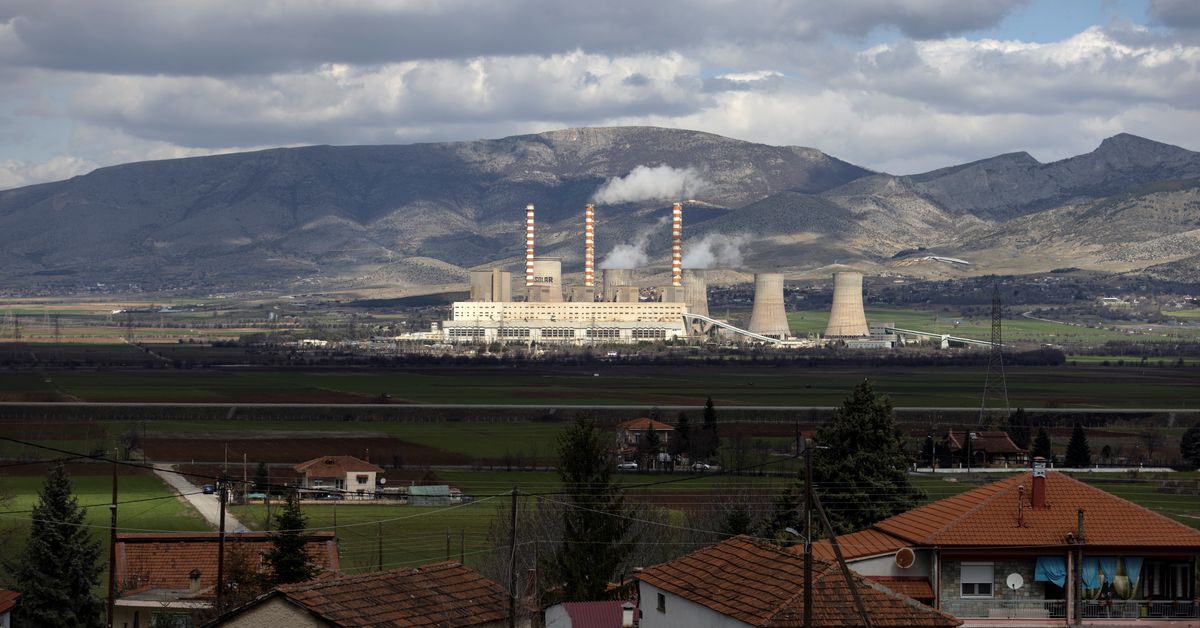 EVIA, Greece, July 21 (Reuters) – Mountaineer Tassos Baltas points to a 22-meter-high mast that monitors wind speeds atop a rocky hill on the Greek island of Euboea and says: “This the mast that has been installed next to us is a harbinger of disaster. “

The mountaineer’s views are one of the many obstacles to efforts to boost wind power in the European Union.

As parts of Europe reeling from devastating floods and German Chancellor Angela Merkel says governments need to step up efforts to tackle the impact of climate change, developers and governments are rushing to capture investments in green energy. They face local opposition, red tape and legal tangles in the licensing process – to the point where the EU is moving away from its emissions reduction targets, according to wind industry data.

The EU has unveiled ambitious plans to cut carbon dioxide emissions by 55% by 2030, which means renewable sources in its energy production are expected to increase to 40%. To do this, it needs 27 GW of new wind capacity – enough to meet nearly a third of European electricity demand – to be installed each year.

This is almost double the 15 GW currently put in place each year, according to WindEurope, an association that represents the industry in Europe.

The desire to accelerate renewable energies pits the greens against each other. Theodota Nantsou, political director of the World Wide Fund for Nature in Greece, said the country had belatedly decided to shut down its coal-fired power plants and was now rushing to develop renewable energy at the risk of harming its biodiversity.

“The problem is not the money: there is a lot of money available,” said Giles Dickson, general manager of the association. â€œThe problem is the projects: we do not receive enough new authorized projects. “

The European Commission has recognized this. The EU’s Renewable Energy Directive states that it should not take more than two years to grant a permit for a power plant, or three in extraordinary circumstances.

But these deadlines have not yet been fully implemented.

The Commission says it is trying to speed things up. However, some of its plans are to be negotiated by 27 EU countries and the European Parliament. This itself can take about two years.

Globally, according to the Global Wind Energy Council, new wind capacity must be installed at about twice the current rate if the world is to meet the Paris Agreement climate pact target of limiting rising temperatures. below 2 degrees Celsius this century.

“I think (the authorization) is one of the key factors that could potentially slow down the energy transition,” said Miguel Stilwell de Andrade, managing director of Portuguese energy company Energias de Portugal (EDP) SA (EDP.LS ) which develops renewable energies, such as wind and solar, told Reuters.

“If we are to achieve the goals of the Paris Agreement, we really need to find a way to make sure the authorization is efficient and transparent.”

In Evia, Baltas and other Greek activists oppose eight new wind farms, slated to span 80 km (50 miles) over an area that encompasses a virgin fir forest overlooking the Aegean Sea. They say it will ruin acres of old-growth forests and turn a largely agricultural region into an industrial zone.

They are also fighting the fact that the Greek government, trying to avoid delays that are hampering some developments, has stepped up demand to build 100 turbines, in addition to the 600 already in place on the island.

Greece, which is targeting renewable energy to help transform the country’s economy, wants to shorten its licensing process to around two to three years, the government said. That’s down from the most typical eight years for such programs in Greece, according to the Hellenic Wind Energy Association, which represents the industry.

As falling costs have made wind power attractive, there is an incentive to go fast. According to the International Renewable Energy Agency, an intergovernmental organization that supports countries in their transition to sustainable energy, the overall cost of new projects both onshore and offshore has been cut by about half over the decade up in 2020. Read more.

This is visible in places like Evia, which experiences strong winds from the Caucasus and the Aegean Sea and is only around 80 km from the mainland electricity grid.

Other countries are also trying to streamline procedures to help access some of the EU’s â‚¬ 750 billion post-pandemic recovery fund – which will only be disbursed if projects move forward.

Elsewhere in the EU, it can take up to a decade for onshore wind projects to receive the green light, according to case studies provided by the industry. In at least one country, Sweden, the Wind Energy Association says it is not unusual for the process to take even longer, as municipalities can vote on projects and there is no of legal time limit to end the appeal process.

For offshore projects, negotiations with companies such as fisheries, tourism and shipping mean licensing processes can take up to six years, said Jonathan Cole, the company’s head of offshore wind. Spanish energy company Iberdrola SA (IBE.MC). For land-based projects, issues range from rules that require turbines to be some distance from buildings to local conflicts.

In one case in Germany, WindEurope said, clearance was so slow that by the time the farm was given the green light, the turbine model in the plans was out of date. The updated height restrictions forced the developer to dismantle prefabricated foundations, as well as persuade the manufacturer to revive an older model.

In another German example, renewable energy developer Abo Wind AG (AB9.DE) requested the construction of a wind project south of Frankfurt in 2016. The plan was initially rejected due to a risk to them. habitats of black storks. After back and forth in court and appeals to local authorities, the company said the wind farm would be built next year.

“This project is a prime example of why the expansion of wind power in Germany is suffering,” said Kristof Frank, director of ABO Wind. “The courts are overloaded and there are not enough staff to quickly manage the many processes.”

A spokeswoman for the German Ministry of Economic Affairs said nearly half of Germany’s electricity is supplied from renewable sources, but Germany needs to speed up the implementation of green energy. This will be the task of the next government, she added. The current government has passed four laws to speed up new infrastructure in parliament, but nothing major has changed.

Germany does not have enough qualified experts in local government, industry folks say. And when its strict environmental laws slow down new wind farms, they divide the green movement.

Italy is the main beneficiary of EU stimulus resources. To meet the targets agreed under the EU’s Green Deal plan to become the first climate neutral continent, it needs to add at least 7 GW of renewable capacity each year, compared to a recent average of less than 1 GW per year. It has identified nearly 60 billion euros of projects for this funding.

But a group of European renewable energy associations say nearly half of all renewable energy projects are abandoned in the country, and the other half are subject to six years of authorization delay.

Italy’s energy transition minister Roberto Cingolani said the consequences of the delays would be considerable.

“If we do not get the permits, we will be slow to meet the target of having 72% of our electricity produced from renewables by 2030,” Cingolani told Reuters.

“We will therefore not be able to move forward with projects to replace furnaces, produce green hydrogen and generate electricity for electric cars.”

Expenses for the authorization process can reach tens of millions of dollars, say people in the industry.

Delays are starting to discourage investment.

“We could invest more in some European countries if we had better visibility on the timing of obtaining permits,” said Carlo Zorzoli, business development manager of the green energy unit of the Italian company Enel SpA. (ENEI.MI), which has the largest renewable energy capacity of any listed company in the world. He declined to name the countries he was referring to.

Typically, wind industry groups say authorities are reviewing projects more carefully, but licensing agencies have not been broad enough: â€œLicensing agencies are often under-resourced and with limited capacity. Market growth faster than expected, it will be difficult for them to keep up, â€said Cole of Iberdrola.

The European Commission proposes that a single body be responsible for coordinating the authorizations of certain offshore projects. But this proposal needs to be negotiated by EU countries and the European Parliament.

Rather than wait, Greece is considering hiring certified private assessors, the country’s energy ministry said in May.

Opposition groups in Evia have rallied.

“And we did it pretty quickly.”