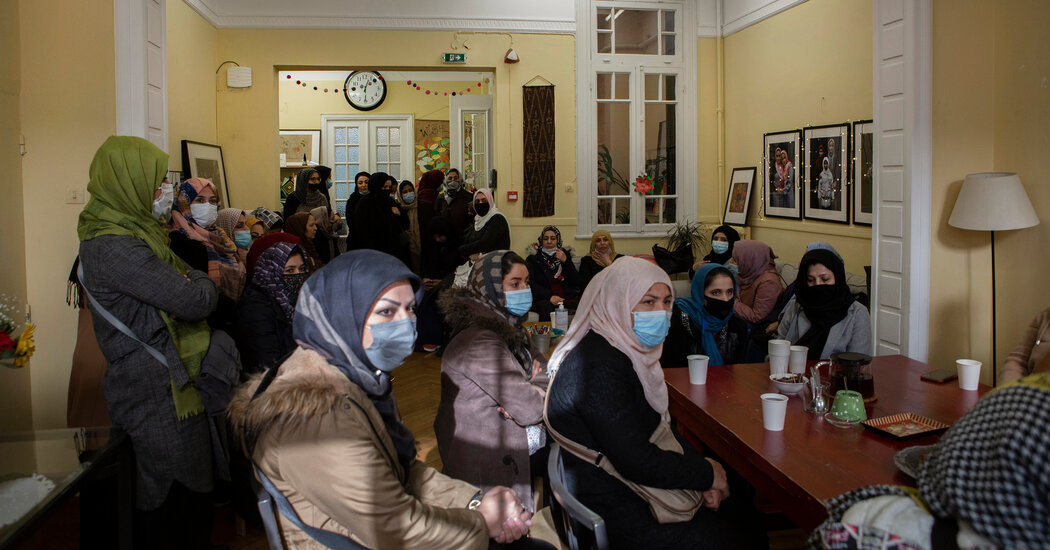 Some of the Afghan women around the table in the neoclassical building in central Athens took notes in leather-bound notebooks as they debated the future of women and girls in their home country. They were lawmakers, journalists and judges – but they were also refugees, a characterization at which many of them winced in shame and disbelief.

“For a woman who has worked for 20 years to have to come here and be called a refugee is not an easy thing,” said journalist Khatera Saeedi, as other members of the group nodded emphatically.

The presence of Ms Saeedi and the other refugees in Athens has highlighted a complicated reality for the tens of thousands of people airlifted after the Taliban takeover: the Afghans Europe wants are those who had never wanted to be there.

“I had a very good life in Afghanistan,” said Wahida, 31, an international organization worker from Kabul, Afghanistan’s capital, who was evacuated to the Netherlands and wanted to be identified only by first name. “I had a very prestigious and challenging job, and I never thought of seeking asylum in another country.”

As Kabul fell to the Taliban in August and Afghan elites were airlifted to Western destinations, European Union countries pledged to take in up to 40,000 people, many of whom have already reached the Europe.

Many are educated and skilled enough to be connected to the vast international presence that has defined Afghan life for the past 20 years – ultimately also giving them the connections to travel abroad through legitimate.

They contrast with tens of thousands of others from their country who have traveled to Europe’s doorstep in recent years – sometimes smuggled, often on arduous overland journeys of thousands of miles and then a final sea crossing. risky – to be turned away.

Since the takeover by the Taliban, Afghans have been those who have filed the most asylum applications in the European Union, according to the European Asylum Support Office. But even before last year, Afghans consistently made up one of the largest groups seeking asylum from abroad.

For many years, they were pushed to the back of the line, their claims turned down in favor of refugees from more pressing and closer conflicts, such as Syria.

Afghans and Iraqis, both fleeing long wars waged by the West, have faced similar difficulties as asylum seekers in Europe, said Camille Le Coz, an expert at the Migration Policy Institute, a research institute based in Brussels, who worked in Afghanistan.

But the arrival of thousands of evacuees from Kabul has brought to the surface a long-standing undercurrent in EU migration policy.

“It highlights the dichotomy the EU has tried to create between people who arrive in Europe seeking asylum through safe and legal channels and those who arrive through irregular means – and the latter are not welcome. “, she said.

But these routes are virtually closed to the vast majority of refugees, forcing thousands of people to arrive in Europe through dangerous and costly smuggling routes.

Normally, only about half of Afghans who have applied for asylum in the European Union have been successful. That acceptance rate rose to 91% in the final months of 2021 as EU evacuees were fast-tracked through normally slow-moving asylum bureaucracies.

The Dutch government, which maintained a military presence in Afghanistan, quickly granted asylum to the 2,000 Afghans it evacuated, but virtually suspended all applications from Afghans who arrived irregularly.

Athens is now the temporary home of around 170 prominent Afghan women and their families, including a third of the country’s female lawmakers, who were flown there by a coalition of charitable foundations and will be resettled in Germany and other wealthy countries.

They met at the Melissa Network, a non-governmental organization in central Athens that supports migrant and refugee women. Melissa provides them with a daily sanctuary, a space to meet and talk, and runs legal aid and mental health workshops.

“There is a significant difference between how these women became refugees and the experience of other refugees,” said Thalia Portokaloglou, mental health expert at Melissa.

“They carry the pain and fear that we see in all the women we work with here,” she added, “but they also have purpose, which helps them find meaning in life.”

Legislators among the evacuees in Athens were working feverishly to set up an organization in exile to defend the rights of Afghan women and, through this, to retain their identity and sense of purpose.

“I think of the people who came and gave me their vote,” said Shagufa Noorzai, who was Afghanistan’s youngest lawmaker when she was elected to the Helmand provincial parliament in 2019, adding that she felt guilty for having fled while her constituents remained to face the Taliban and the famine.

“A politician should be with his people in times of war,” said Nazifa Yusufi Bek, another lawmaker from Takhar province. “Now we are in Europe, we are safe, but our concern is for our people in Afghanistan.”

While most deportations of Afghans from the European Union have stopped in recent months, the bloc has tried to discourage ordinary Afghans from coming and is paying neighboring countries hundreds of millions of dollars to take in fleeing refugees in the purpose of dissuading them from heading for Europe. .

But “we must be clear”, he added, “we will only accept those who really need protection – those who cross borders illegally will be turned away”.

And not only do Afghans and other asylum seekers in Europe face long waits and low chances of obtaining protection, they also increasingly face indiscriminate violence and extrajudicial deportations to external borders of Europe, which prevents them from applying for asylum in the first place.

In early September, just two weeks after the fall of Kabul and as sympathy for Afghans reached its peak, Greek border guards reportedly violently expelled a large group of asylum seekers, including Afghans, to Turkey. Among them was an Italian legal resident of Afghan origin who worked in Greece for Frontex, the European Union’s border agency, and had been mistaken for an asylum seeker by the very border guards he was. there to help.

Most Afghans cross Asia to Turkey and arrive in Greece by putting themselves in the hands of smugglers who place them on precarious canoes to cross the Aegean Sea. If they manage to file asylum applications, they must wait years in a legal and financial vacuum until their applications are assessed.

This was the experience of another Afghan woman in Melissa who was there to help the newly arrived group of evacuees: the organization’s Farsi interpreter, Karime Ganji.

She arrived in Greece in 2016 after a dramatic mid-winter overland journey, crossing mountains and rivers with her two children, then aged 3 and 9. During the last five years in Athens, she learned English and Greek and enrolled in a university in Athens. But his asylum application is still pending.

Ms Ganji said she sympathized with the group of prominent women she was helping, but added that other Afghans and other asylum seekers also deserved more support.

“They came from a bloodbath, they are survivors,” she said in tears. “I don’t see them as politicians, just as a small group of innocent people from Afghanistan who need help.”