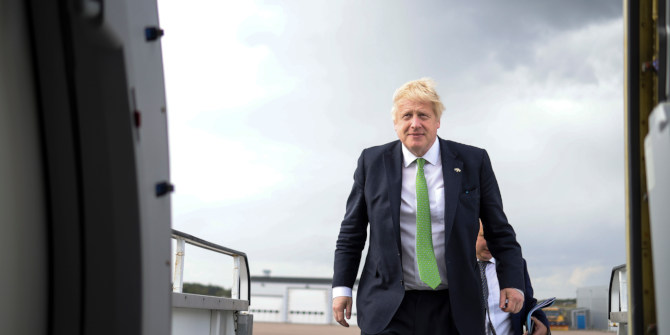 Boris Johnson will hold crisis talks in Belfast today to try to resolve differences over the Northern Ireland protocol. Robert Basedow writes that the UK would be wise to carefully assess EU red lines before demanding a protocol review.

Triggered by the recent Northern Ireland regional elections and the Queen’s Speech, Brexit has returned in recent weeks as a hot topic. The new confrontation between London and Brussels once again revolves around British demands to revise the controversial Northern Ireland protocol. London wants to facilitate customs controls between Northern Ireland and Great Britain as well as revoke the powers of the CJEU to ensure the proper application of European law in Northern Ireland. The idea in London seems to be that the ECJ could be replaced by a new international tribunal.

When analyzing this controversy and its potential outcomes, most observers focus on the preferences and negotiating dynamics between the UK government, the European Commission and member states. Yet the European Court of Justice (ECJ) may have a lot more to say about a revised Northern Ireland protocol than is often acknowledged. Since the 1970s, the CJEU has regularly had to assess the EU’s ability to submit to international jurisdictions. And remarkably often, the ECJ has spoken out against EU participation, often frustrating key policy projects from the European Commission and member states.

While the CJEU has justified these rulings by arguing that it must defend the European legal order against short-sighted political action, critics see the ECJ as a rogue agent seeking to shield its powers from competing international courts. Whatever the ECJ’s motives, these observations imply that London should carefully analyze the ECJ’s external judicial policy to understand where the EU’s red lines really lie. The Commission and member states – even if they wanted to – might not be able to meet the UK government’s demands, risking a lasting breakdown in post-Brexit relations. But to fully understand the role of the CJEU in this case, it is useful to take a step back and recall the key issues that the Northern Ireland Protocol seeks to resolve.

Brexit and the Irish border

Brexit in its current form has created the need to erect a customs border between the UK and the European Union single market to prevent trade loopholes. This customs border would normally have been drawn along the borders of the United Kingdom. In other words, the border would run in the English Channel between the UK and France as well as on land between Northern Ireland and the Republic of Ireland. The Good Friday Agreement and the hard-fought Northern Ireland peace process, however, have dissuaded European and British policymakers from this default option.

The concern was and is that a customs border between the Republic of Ireland and Northern Ireland would rekindle what was effectively a deadly long-running civil war in Northern Ireland between Republican and Unionist factions. Consequently, European and British policymakers were faced with two options.

First, they could draw a customs boundary between Northern Ireland and mainland Britain in the Irish Sea – the solution now enshrined in the Northern Ireland Protocol – and keep Northern Ireland in the market subject to the relevant European goods laws and therefore necessarily to the jurisdiction of the ECJ.

Or second, they could have agreed on a customs border between the Republic of Ireland and the rest of the single market. This arrangement would also have avoided a trade loophole at the EU’s external customs border and Northern Ireland could have ceased to apply EU laws. The Republic of Ireland, however, would have had to deal with intra-EU trade frictions and would run the risk that goods could enter its territory from Northern Ireland which did not comply, for example, with European standards of food or environmental security. In short, negotiators were arguing over who should bear the economic and political costs of Brexit – the UK or the EU and notably the Republic of Ireland.

In 2019, the UK consciously agreed with the EU in the Northern Ireland Protocol on the first solution, but is now seeking to revise the deal. While pragmatic solutions to his request to facilitate customs checks between Northern Ireland and mainland Britain seem possible (for an overview see here), there is no simple solution to his request to replace the CJEU by, for example, a new international court. As long as Northern Ireland remains in the single market and therefore subject to European laws, the fulfillment of the British request would indeed undermine the very foundations of the European legal and political order. To fully appreciate gravity, it is necessary to clarify the practical implications.

The UK’s request to remove the CJEU’s jurisdiction over EU law in Northern Ireland would result in a situation where EU law would still apply in Northern Ireland, but a court other than the ECJ would authoritatively interpret its meaning. This court, in other words, would compete with the ECJ and challenge its judicial monopoly. CJEU case law over the past 70 years, however, leaves no doubt that EU participation in such a tribunal would be considered unconstitutional – or in the EU’s phrase “to undermine the external autonomy of the European legal order”.

In the unlikely event that the Commission or member states are willing to consider London’s request, the ECJ would almost certainly strike down a revised protocol and make it impossible for the EU to participate in a new tribunal. Over the past decades, the CJEU has indeed never hesitated to defend its judicial powers and the integrity of the European legal order. For example, it prevented the EU from joining the European Free Trade Area Court (EFTA Court), thwarted European Commission plans to create a pan-European patent court, and even barred the EU from to accede to the European Convention on Human Rights and its Court despite the fact that the Lisbon Treaty has explicitly mandated EU accession.

In sum, London should carefully assess Brussels’ red lines. If London insists on revoking the jurisdiction of the ECJ, it would effectively make Northern Ireland’s participation in the single market impossible and force the EU to either abandon the Good Friday Agreement or create a customs border between the Republic of Ireland and the Single Market. However, any of these outcomes would erode the basis of friendly EU-UK relations over the next decade and further destabilize the political situation in Northern Ireland.

After all, the regional elections on May 5 produced a majority in favor of preserving the Northern Ireland protocol as well as the region’s special status within the UK market and the single market. Moreover, Republican Sinn Fein came out on top in these elections, putting the reunification of Northern and Southern Ireland back on the agenda. Thus, London’s strategy to aggravate the situation could well backfire and jeopardize the country’s integration.

Note: This article gives the author’s point of view, not the position of EUROPP – European Politics and Policy or the London School of Economics. Featured image credit: Andrew Parsons / No 10 Downing Street (CC BY-NC-ND 2.0)