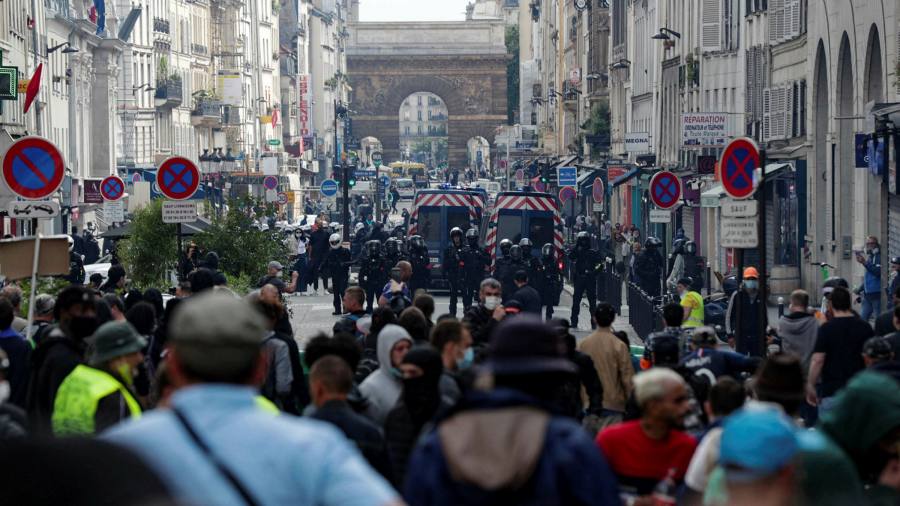 According to the thousands of demonstrators who took to the streets of Paris, Montpellier and other French cities this week, their country has become “a dictatorship” and its president is reestablishing “apartheid”.

The reason for their anger: Emmanuel Macron’s decision to make vaccination against Covid-19 compulsory for all health workers, before possibly imposing it on the rest of the population. The French must now prove that they are either vaccinated or that they have recently tested negative for the virus to enter cafes, restaurants, cinemas, high-speed trains or shopping centers. In the fall, coronavirus tests will no longer be free.

A little less than a year from the presidential elections, the marches have rekindled the specter of the yellow vests that rocked France in 2018 and 2019, when the popular protest sparked by motorists’ anger over a fuel tax turned into a months-long anti-government movement.

Macron’s move comes as countries in Europe struggle to contain the fast-spreading Delta variant first found in India and which is now dominant in most EU countries. With less than half of their populations fully vaccinated, governments are seeking to force their citizens to get the vaccine to limit a new wave of infections and avoid further restrictions.

Macron is following in the footsteps of Italian Prime Minister Mario Draghi, who in April was the first in Europe to impose vaccinations on health workers after outbreaks in hospitals and nursing homes. Greece and Latvia followed suit this week, threatening these workers with job losses if they don’t stick to the line.

Around 4,000 people demonstrated in Athens and the UK on Wednesday, a petition against compulsory vaccination of health and social workers received more than 93,000 signatures.

Compulsory vaccination in Europe is not new: 40 percent of countries have some form of forced vaccination, including against hepatitis B, measles and meningitis in children, said Anna Odone, professor of public health at UniversitÃ  Vita-Salute San Raffaele in Milan.

Mandatory vaccines “must be used in an emergency and we are living in a time of emergency,” she said.

There is a direct link between hospitalizations, which are on the rise again in Europe, and whether or not people have been vaccinated. In the 30 largest hospitals in France, each patient in intensive care had not been vaccinated, the government said this week. In Greece, the figure is 99%.

Despite strong minority protest, data from France and Italy suggest that governments’ coercive approach is working.

Since Italy issued its decree in April, cases of Covid-19, hospitalizations and deaths among residents of nursing homes have declined, so much so that the cases have all but disappeared. This reinforced a trend that began when the country imposed a targeted vaccination campaign among residents in February.

In France, more than 3 million vaccine appointments have been booked since Macron’s speech on Monday, with daily bookings far exceeding previous records, according to the Doctolib appointment site. About 60 percent of them were people under 35 who had previously taken a long time to get the vaccine.

Reluctance to vaccinate has decreased in Europe. In France, more than eight in 10 adults declared having or being vaccinated, double the proportion in December, according to Odoxa, a pollster.

The surge in reservations “shows that there was, among those who were not vaccinated, a very small minority of anti-vaccines,” said ClÃ©ment Beaune, French Minister for European Affairs.

Fears of a looming fourth wave of infections mean most people are willing to do whatever it takes to keep the virus at bay, said Mircea Sofonea, infectious disease modeler at the University of Montpellier.

“The fourth wave of hospitalizations can be delayed, it can be mitigated, if we vaccinate 60 or 70% of the population by the end of the summer,” he said.

However, many still have doubts about the ethics of these mandates. For Professor Adam Finn, who sits on the UK government’s Joint Committee on Vaccination and Immunization, the most successful vaccination programs “don’t have to provide sticks or carrots” and instead rely on clear communication.

â€œIt took decades to build that level of trust,â€ he said. “My instinct is when it works well, be careful not to get involved.”

Countries that have made jabs mandatory

Turkmenistan ruled on July 7 that any adult over 18 should be vaccinated, unless they have a medical reason not to.

Indonesia made vaccination compulsory for all adults in February, with the capital Jakarta threatening fines of up to 5 million rupees ($ 357) if refused.

Australia made vaccinations mandatory in June for high-risk caregivers, with effect from September

Italy introduced new rules on April 1 under which healthcare workers will be transferred, demoted or suspended without pay if they refuse the vaccine.

Greece said this week that vaccines will be mandatory for nursing home staff immediately and for healthcare workers by September 1.

The UK passed a law on Tuesday making vaccination compulsory for all staff in care homes registered with the Care Quality Commission, or lose their jobs. A consultation is planned on the expansion to all NHS and primary care staff.

Spain’s region of Valencia seeks to follow France’s lead in requiring people to show they are vaccinated before they can go to restaurants, bars, hotels or nightclubs.

In Germany, the health minister said he was looking to make people pay for coronavirus tests, which are currently free.