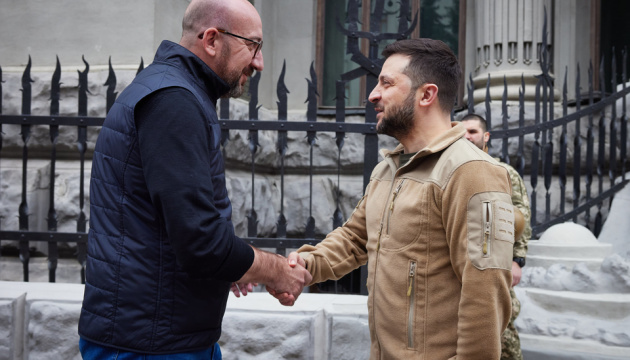 The European Commission will publish an opinion granting Ukraine EU candidate status by the end of June, and then it will be on the agenda of the European Council.

The relevant statement was made by European Council President Charles Michel during a joint briefing with Ukrainian President Volodymyr Zelensky in Kyiv, reports an Ukrinform correspondent.

“We will have the opinion of the Commission by the end of June. Then it will be my responsibility to assess when I can put this item on the agenda of the European Council and the Council, to make sure that we have the political discussion to move forward on this,” said Michel.

According to Michel, he feels very strong support for the choice of Ukraine.

As a reminder, on April 18, 2022, Ukrainian President Volodymyr Zelensky handed over a completed questionnaire for obtaining the status of EU candidate country to the Head of the EU Delegation in Ukraine, Matti Maasikas.

Photo: Office of the President of Ukraine