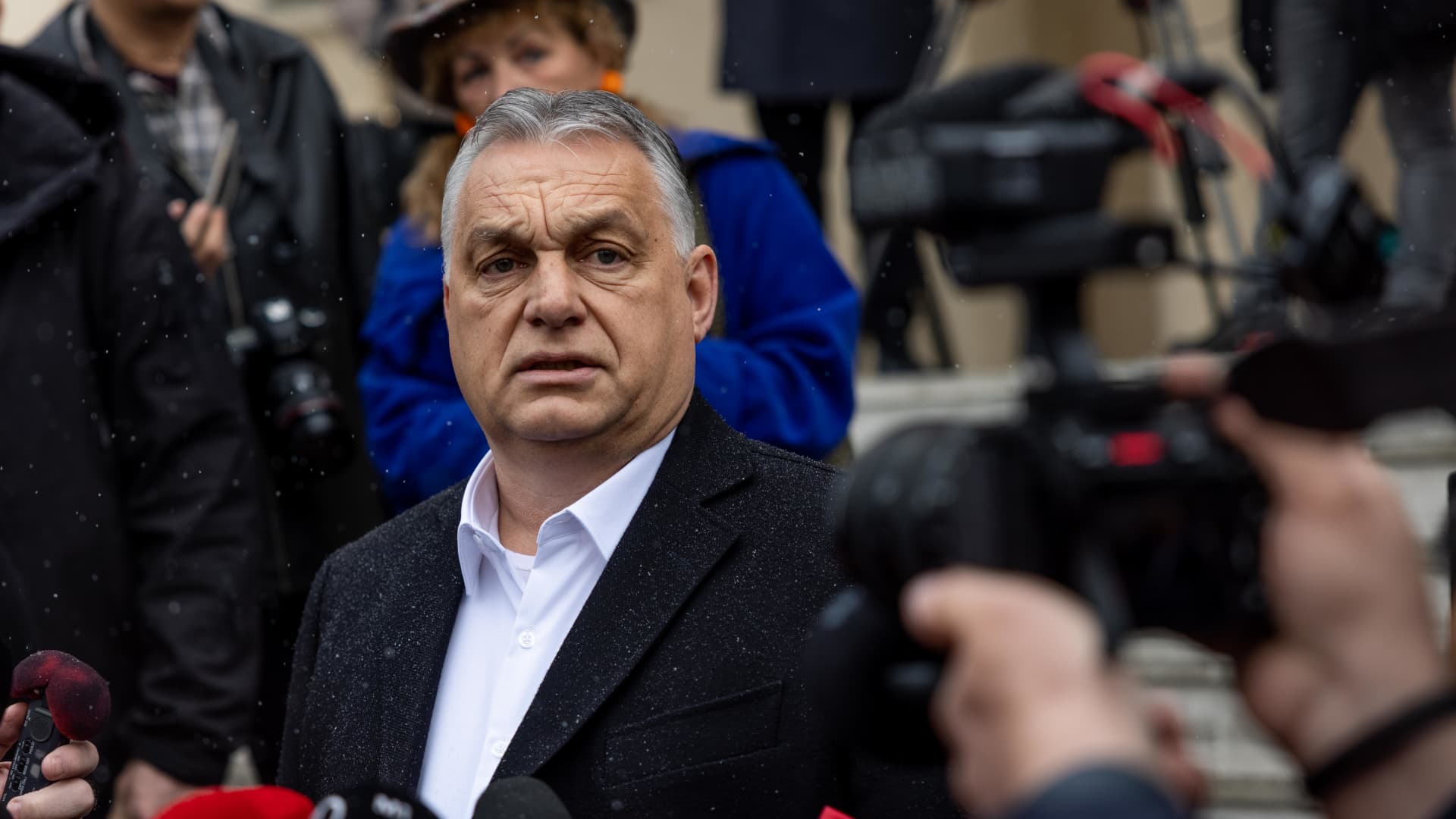 Prime Minister Viktor Orban and Fidesz during a national vote

Hungarian Prime Minister Viktor Orban speaks to the media after casting his vote in the general parliamentary election on April 3, 2022 in Budapest, Hungary.

Orban seeking a fourth consecutive term, preliminary results showed his party was close to controlling 135 of Parliament’s 199 seats. It was comfortably ahead of the opposition United for Hungary alliance, which was expected to win 57 seats after 80% of the votes were counted.

The election was expected to be closer than in previous years, but Fidesz still held a 5-6 percentage point lead in polls ahead of Sunday’s vote.

Orban, widely considered the most pro-Kremlin leader of the 27-nation European Union, spent 12 years in power in Budapest. He is the country’s longest serving leader since the fall of communism in 1989 and has long been a thorn in the side of the EU.

Addressing his supporters after Sunday evening’s vote, Orban said: “We have won a victory so big that you can see it from the moon, and you can certainly see it from Brussels”, according to a translation of the Associated Press. Opposition leader Peter Marki-Zay admitted defeat shortly after Orban’s speech.

Orban, 58, has often bragged about his close relationship with Russian President Vladimir Putin, and it is this bond that has become a major challenge for his ruling party Fidesz’s election campaign.

Hungary also became the first EU country to buy a Russian-made Covid-19 vaccine – even though it has not been approved by European regulators.

But Orban remained loyal to the European Union in the wake of Russia’s unprovoked invasion of Ukraine and sought to downplay his ties to Putin. His message in previous weeks has been a “Hungary must stay out of this conflict” approach.

His government has announced that Hungary will welcome Ukrainian refugees and also supports Ukraine’s application for EU membership. This is on top of having agreed, together with other EU member states, to tough sanctions against Russian oligarchs and the Russian economy.

Hungary is also a member of NATO and is open to receiving troops from the military alliance on its territory. However, he rejected any energy sanctions against Moscow and banned the direct transit of lethal weapons to Ukraine via Hungary.

Influence on the courts

After joining the EU in 2004, Budapest has often been at odds with Brussels. The former communist state has often been criticized for seeking to assert its influence over the courts, media and other independent institutions.

His party, Fidesz, still exercises tight control over state media, and previous election campaigns were based on an anti-immigration and protectionist message. Indeed, the country built a fence on its southern border during the European migration crisis of 2015.

Andrius Tursa, adviser for Central and Eastern Europe at consultancy Teneo, believes whoever wins on Sunday will face a series of challenges such as slowing economic growth, soaring inflation and hundreds of thousands of refugees entering the country from Ukraine.

“Fidesz is already highlighting the growing economic and humanitarian challenges presented by the war in Ukraine to pressure the European Commission to unlock the country’s access to the 7.2 billion euros in grants from the Recovery Facility and EU resilience,” he said in a research note last week. , referring to the EU’s post-pandemic recovery fund.

“At the same time, the EC might be more reluctant to trigger the so-called rule of law mechanism against Hungary (and Poland) – at least until the war in Ukraine de-escalates/ends – leaving more time for a compromise.” This rule of law mechanism is the EU’s new tool that allows it to reduce or suspend funding to EU states if they are found not to be respecting the rule of law.

— CNBC’s Silvia Amaro and Sam Meredith contributed to this article.

How Ukraine is changing European politics

ERYTECH will present a new vesiculation approach at the 24