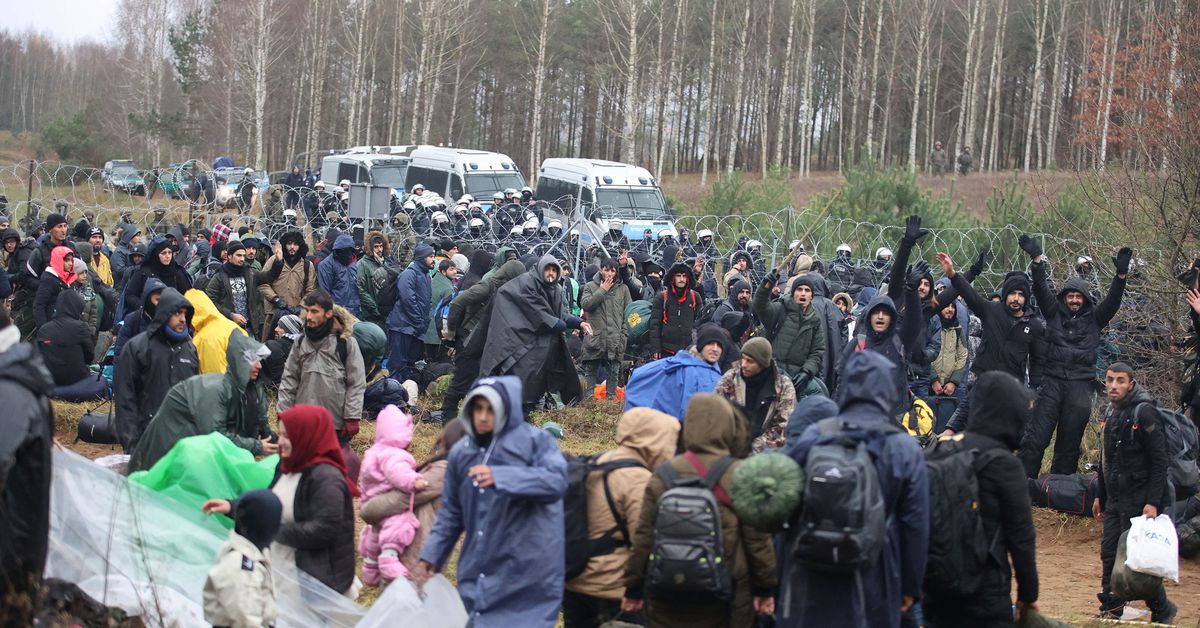 KYIV, Nov. 8 (Reuters) – Thousands of migrants gathered near the Belarusian border on Monday, Polish authorities said, as European Union member states called for more sanctions on Minsk and forces of security were preparing for further attempts to cross the border.

Warsaw has accused Belarus of trying to spark a major confrontation, with video clips showing hundreds of migrants marching towards the Polish border and some trying to break through the fence using shovels and other tools.

“We expect that in the next few hours the attacks on our border will be repeated by groups of several hundred people,” Pawel Soloch, head of Poland’s National Security Office, told reporters.

Polish government spokesman Piotr Muller said there were currently 3,000 to 4,000 migrants near the border, and more than 10,000 others across Belarus ready to try to cross into Poland.

Warsaw has said it has deployed additional soldiers, border guards and police, while neighboring Lithuania has said it could establish a state of emergency on its border with Belarus.

Poland said it resisted the migrants’ first attempts to force the border crossing on Monday.

Polish border guards announced that as of Tuesday 06:00 GMT, the Kuznica crossing, near the site where migrants were trying to force the passage, will be closed.

“We have three border posts with Belarus,” Deputy Interior Minister Maciej Wasik told the private television station Polsat News. “The closure of one of them can (…) be considered as a kind of economic sanction.”

Wasik said there should be tougher European sanctions against Minsk following escalating border tensions. The Baltic States, Lithuania, Latvia and Estonia have made similar appeals.

The EU also wants to target airlines from third countries that help transport migrants from the Middle East to Belarus.

The European Union accuses Minsk of encouraging migrants from the Middle East and Africa to enter the EU via Belarus, as a form of hybrid warfare in revenge for Western sanctions against the government of President Alexander Lukashenko for violations human rights.

Video released by Polish authorities showed a man cutting part of a barbed wire fence, another attacking the fence with a spade, while a Polish soldier sprayed an unidentified substance from a can.

In a previous video, shared by Belarusian blogging service NEXTA, migrants carrying backpacks and wearing winter clothes were seen walking along the side of a highway. Other videos showed large groups of migrants sitting by the side of the road and escorted by armed men dressed in khaki.

Migrants gather near a barbed wire fence in an attempt to cross the border with Poland in the Grodno region of Belarus on November 8, 2021. Leonid Scheglov / BelTA / Handout via REUTERS

Lithuania has said it is also moving additional troops to the border to prepare for a possible increase in migrant crossings. Latvia said the situation was “alarming”.

Lukashenko’s government has repeatedly denied creating a migrant crisis, accusing the West of crossings and treatment of migrants.

The Belarusian state border committee confirmed on Monday that many refugees were heading for the Polish border, but said Warsaw was adopting an “inhuman attitude”.

Poland has stationed more than 12,000 troops at the border, its defense minister said, while sharing aerial footage of migrants clustered on the Belarusian side.

“They throw tree trunks on the fence in order to reduce the height of the fence to cross it,” said Katarzyna Zdanowicz, spokesperson for Polish border guards in the region.

The EU, US and Britain have imposed sanctions on Belarus after Lukashenko unleashed a violent crackdown on mass protests following disputed elections last year.

The US State Department on Monday said it was concerned about the disturbing images and reports coming from the border, and called on the Belarusian government to immediately stop its campaign to orchestrate and coerce irregular migration flows through its borders. borders.

The United Nations has called the border scenes “deeply worrying”.

Poland said seven migrants were found dead on its side of the border, with reports of more deaths in Belarus.

Humanitarian groups accuse the ruling nationalists in Poland of violating international asylum rights by pushing migrants back to Belarus instead of accepting their requests for protection. Poland claims its actions are legal.

Polish Prime Minister Mateusz Morawiecki said on Facebook: “The Polish border is not just a line on a map. The border is sacred – Polish blood has been shed for it!”.