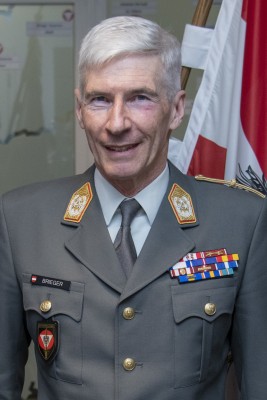 Austrian Robert Brieger is the new permanent chairman of the EU Military Committee. / Photo: © Wikimedia Commons / Chairman of the Joint Chiefs of Staff / CC BY 2.0

Austrian Chief of Staff Robert Brieger is the new head of the European Union Military Committee (EUMC). General Brieger succeeds Italian General Claudio Graziano. The body, made up of the Chiefs of Defense of the EU states, is responsible for the implementation of the common security and defense policy.

While I support the #EU #Military Committee, I look forward to continuing to build a true defense culture, with the support of my fellow Chiefs of the Defense Staff.
Gen Robert Brieger #EUdefense #Europe #StrategicCompass #EUMS @EU_Commission @EUDefenceAgency @eu_eeas pic.twitter.com/NF9Rrjcp0G

The European Union Military Committee (EUMC) is an advisory body to the High Representative of the EU for Foreign Affairs and Security Policy and the Political and Security Committee (PSC).

Our priority now is to fully implement the #StrategicCompassif we want to keep our promises in terms of credibility #EU as a global security provider. #EUdefense

The Military Committee also directs EU operations, with operational implementation under the responsibility of the European Union Military Staff (EUMS).

Robert Brieger has been Chief of Staff of the Austrian Armed Forces since July 24, 2018 and took office as permanent chairman of the European Union Military Committee (CEUMC) on May 16, 2022.

He started his military career in 1975 with military service. He attended the Military Academy from 1976 to 1979 and became a company commander in the 33rd tank battalion in 1982. From 1985 to 1988, he underwent staff training.

For twelve years he was responsible for the military strategic direction as well as the planning and preparation of the operations of the Austrian Armed Forces at home and abroad in various leadership positions within the Ministry of Defence. In 2001 and 2002 he was commander of the Austrian contingent in Kosovo and from 2011 to 2012, as commander of the EUFOR force in Bosnia and Herzegovina, he led 1,700 soldiers from a total of 25 nations.

Throughout his career, Mr. Brieger has held various positions.

Kylian Mbappé stays at PSG: the transfer decision as it happened