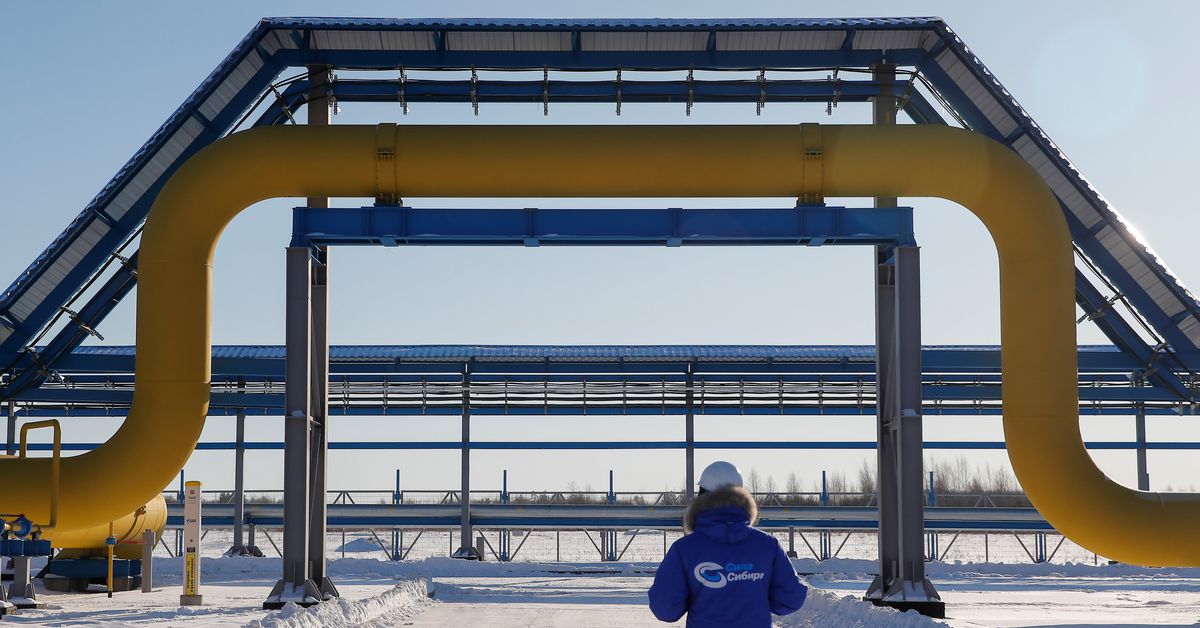 An employee in a branded jacket walks past part of Gazprom’s Power of Siberia pipeline at the Atamanskaya compressor station outside the far eastern town of Svobodny in Russia’s Amur region, November 29, 2019. REUTERS/Maxim Shemetov.

FRANKFURT/LONDON, March 29 (Reuters) – Russia said it would work out practical arrangements by Thursday for foreign companies to pay for its gas in roubles, increasing the likelihood of supply disruptions, Western countries have so far rejected Moscow’s request for a currency change. .

President Vladimir Putin’s order last week to charge ‘hostile’ countries in rubles for Russian gas boosted the currency after it fell to historic lows when the West imposed sweeping sanctions on Moscow for his invasion of Ukraine.

“No one will provide gas for free, it’s simply impossible, and you can only pay for it in rubles,” Kremlin spokesman Dmitry Peskov told reporters on Tuesday.

The move has drawn heavy criticism from European countries, who pay for Russian gas mainly in euros and say Russia has no right to review contracts, as G7 nations rejected Moscow’s demands this week . Read more

Wholesale gas prices in Europe rose further this week due to concerns over supply disruptions.

So far, Russia has fulfilled its contractual obligations to supply gas to Europe. Read more

Peskov said that in line with the March 31 deadline set by Putin, “all modalities are being worked out to make this system simple, understandable and workable for respected European and international buyers.”

But G7 countries have asked companies not to accept payments in rubles and for most gas supply contracts to stipulate payments in euros or US dollars.

“It’s a position we share, which our energy commissioner has subscribed to,” a spokesman for the European Commission told a press conference in Brussels on Tuesday.

The European Union is assessing a scenario including a complete shutdown of Russian gas supplies next winter, as part of its contingency planning for supply shocks, the European Commission said last week.

Europe gets about 40% of its gas from Russia. Imports amounted to about 155 billion cubic meters (bcm) last year.

Putin’s request fueled fears in Germany, Europe’s biggest economy, about major gas supply disruptions if utilities did not pay in roubles, and how that would affect industry and households. Read more

Without the Russian gas supply, the German economy would suffer “massive damage, which should be avoided as far as possible,” E.ON chief executive Leonhard Birnbaum told the news program. German television Tagesthemen, adding that the country would need three years to become independent from Russian Gaz. Read more

Germany’s gas grid regulator will prioritize use for heating in residential accommodation over industrial use, which would force energy-hungry manufacturers such as steelmakers to bear the initial brunt of any cuts supply, he said.

The European Commission has proposed legislation requiring EU countries to fill their gas storage to at least 80% this year. Read more

Markus Krebber, CEO of Germany’s largest utility RWE (RWEG.DE) and a client of Gazprom (GAZP.MM), said earlier that a complete halt in Russian gas imports could only be tolerated for a very short period . Read more

Last week, the United States and the EU reached an agreement for the United States to supply 15 billion cubic meters of liquefied natural gas (LNG) this year, which alone would not be enough to entirely replace the imports of Russian gas. Read more

Peskov said Russia, which claims to be carrying out a “special military operation” in Ukraine and is entitled to defend itself against sanctions, has been and will be a reliable supplier of gas.

But foreign companies should buy rubles and use them to make gas payments, he added.

If that happens, it could redirect supplies to Asian markets, among others, the TASS news agency said.

Highlights on the European Union – KION546