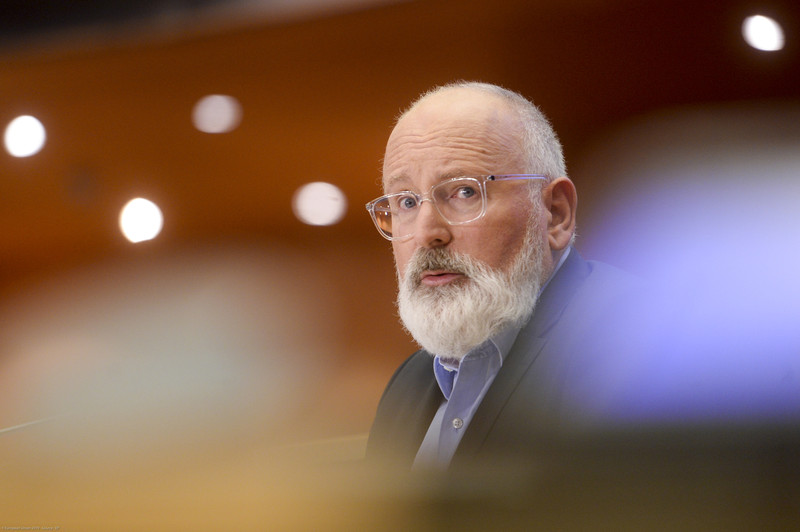 EU proposals to halve pesticide use by 2030 — part of its ambitious agenda Farm-to-fork strategy — will finally be presented in Brussels on Wednesday 22 June.

The regulation on the sustainable use of pesticides, which is due to be published after three months, will be the first binding European law requiring farmers to reduce their use of chemicals. It is seen by many as a crucial step in the fight against European complicity in the global climate crisis.

But agribusiness groups and several member states vehemently oppose tougher rules, and many have lobbied officials to water down the proposals.

The ongoing war in Ukraine has fueled fears of a food crisis, and several governments and parliamentarians have joined the opposition.

In an exclusive interview with Investigate EuropeEuropean Commission Vice-President and Head of the European Green Deal Frans Timmermans explains why legislation is essential to ensure long-term food security and why it should not be sacrificed for short-term gains.

IE: The long-awaited pesticide regulation will be presented tomorrow. Are you worried about what will happen to the overall green strategy?

Timmermans: Well, we have a very difficult situation because of the war in Ukraine. The war poses huge risks to food security in parts of Africa and the Middle East. But using these issues as a reason for not having farm to fork would be killing the long-term health and survivability of our agricultural sector for very short-term considerations.

So you’re insisting that now is a good time to set pesticide and fertilizer reduction targets, and to force farmers to change the way they do farming?

When will he force them? Not tomorrow, not this year, not next year. We take a perspective of 2030, 2040, 2050. And if we don’t defend this perspective now, what will their business model be? Can they continue with this level of pesticide use? We cannot afford to postpone. We must take action to deal with the real and pressing problems of farmers. But the actions we take must not destroy our long-term vision of a healthy and sustainable agricultural sector.

You know, I’ve been here for 30 years. Each time something is proposed in the agricultural field, it’s always the same reaction: “Report, derogation, not for us, for someone else”.

Meanwhile, 70% of soil in the EU today is in an unhealthy state, and 80% of that soil is agricultural land or grassland. These are scientific facts. We are losing pollinators so quickly. It is a bigger threat to our long-term food security than the conflict in Ukraine, because 75% of major food crops depend on animal pollination. 5 billion euros per year in Europe depend directly on animal pollination. Please disconnect the immediate crisis from the long-term adaptation we need.

The regulation will propose a 50% reduction in pesticide use in Europe by 2030 and introduce binding national reduction targets. This is the first time that mandatory targets will be introduced for pesticide reduction. Why are they needed?

Well, we need binding goals because we’ve tried before with non-binding goals, and those aren’t getting us anywhere. Binding targets give certainty to industry and the agricultural sector. And besides, our fellow citizens push us to do it. There is a huge and growing understanding that ecocide is a direct threat to us.

Referring to the ’emergency crisis of war’, the Commission’s Directorate-General for Agriculture is set to allow more farming in ‘areas of ecological interest’, giving the green light to the use of pesticides and without the obligation of crop rotation. How does this square with the prevention of ecocide?

Any waiver, any deviation from the long-term policy should only respond to immediate concerns and emergencies. The right treatment only comes after the right diagnosis.

The problem is the logistics issue, you can’t get grain and corn from Ukraine and Russia to Africa and the Middle East. So that’s where we need to focus our efforts. This recent plan is to build silos to advance transportation.

And here we have to use international instruments, especially the World Food Program, to get enough money and projects for Africa. This is our immediate emergency. For me personally, it doesn’t make sense to use protected areas to produce even more raw materials because of this. By the way, one of the effects of this crisis and the incredible fertilizer prices is that organic farming has become more profitable because they don’t need Russian gas to make the fertilizers.

You are facing a strong backlash from the agri-food sector. How do you respond to these concerns?

The main question here is how to involve the whole of society in this debate. If we keep the discussion within the group of people who have very clear interests, then of course the discussion is different. I think we are about to change. The Common Agricultural Policy has been a matter for insiders for 30 to 40 years. And now you see that our citizens are waking up, as they woke up to the climate crisis. We have to prove to the farming community that there is a benefit to them there.

Young farmers understand, they really understand. And they want to be part of it. The farming community is not monolithic on this issue. But of course the agribusiness complex is mobilizing, and we have a very, very divisive debate, which I feel like I have with them all the time.

I never attacked anyone at Copa-Cogeca [the farmers’ lobby in Brussels] personally, but the president of Copa-Cogeca makes a point of attacking me as a person all the time. I wonder why this level of aggression towards me. Is it because I’m right? Could this be the reason?

Some Member States argue that if Europe introduces stricter rules, so should other countries. Do you consider this a legitimate request?

The European Commission spends a tiny sum on programs that support the change of the traditional agricultural model. Why is that?

It’s like trying to change course on Earth’s biggest oil tanker. It takes time. The only thing I need to do immediately is to avoid that we go back to the old course, even if there are corrections now. And the point you raise is extremely valid. If you look at the total Common Agricultural Policy budget and then look at what is being spent to go in the right direction, it is such a small part of the total. We have to change it.

But changing course has an immediate effect on many farmers in the European Union. You must have them on board. And vested interests scare them into thinking that what we’re doing is going to cost them their livelihood. While I am firmly convinced that if we do not do what we propose, in 10, 15 years, the problem of biodiversity will be so horrible that agriculture will no longer be sustainable in Europe. And then we will really have a food crisis in Europe.

Denmark has taxed pesticides based on their toxicity, which has led to less use of the more dangerous ones. Could it be a pan-European model?

I think it’s an interesting idea. But we have to take into account that the difference between Member States is so great that what works in Denmark does not necessarily work in Italy or Spain. So I’m a little cautious, but any good idea is an idea worth exploring.

The pesticide reform proposal is only the start of negotiations with member states and parliament. Are you ready to fight?

I am absolutely sure that we have the majority of our fellow citizens behind us. Political leaders in Europe are reluctant to engage in this debate because they know it is very easy to lose voters if they are seen as not helping farmers. I want to help farmers, but I want to help them in a sustainable way, not only for tomorrow, but also for ten years and twenty years. And for that, we have to become sustainable.

Joint statement by the European Commission and the High Representative