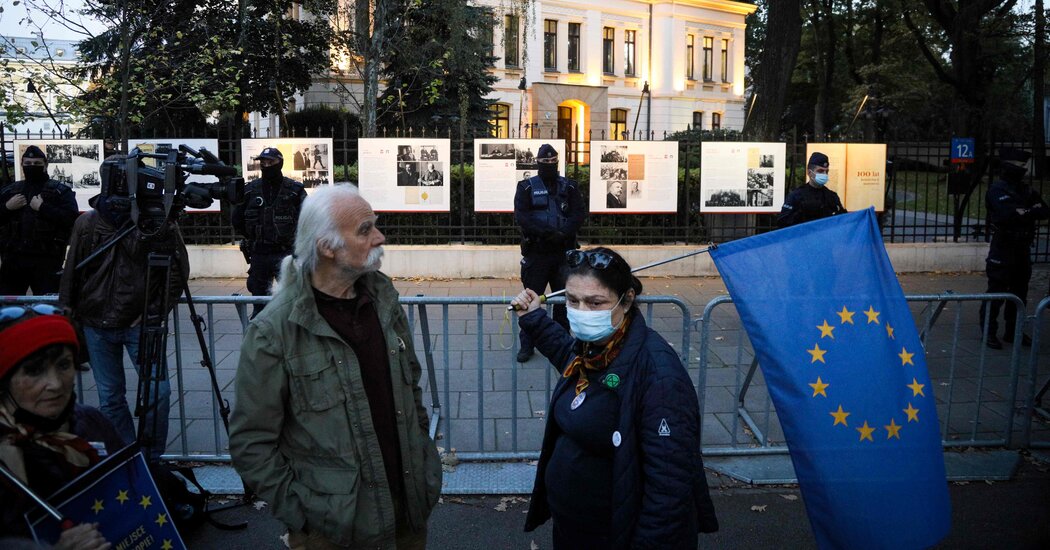 Why is Poland fighting against the supremacy of the courts of the European Union?

BRUSSELS – Poland threw the gauntlet at the European Union on Thursday when its constitutional court ruled that the Polish constitution in some cases overturns rulings by the bloc’s highest court.

The Polish judgment, which directly calls into question the primacy of European law, one of the cornerstones of the European Union, will only take effect once it has been published by the government in an official journal, which could take some time. time.

But the European Commission, the bloc’s executive, reacted swiftly, claiming that the Court of Justice of the European Union has primacy over national courts or constitutional tribunals of member countries. The commission said it would take action to enforce judgments of the European High Court.

For the European Union, getting members to adhere to the laws of the bloc is essential for the survival of the Union, which is based on shared sovereignty and a commitment to European values ​​and the rule of law, as stated in its governing treaties.

“If you want to have a union, you have to have the same European law applied in the same way in all member states,” said Didier Reynders, the European Commissioner for Justice, in an interview.

What are the issues ?

Poland’s right-wing government has long been at odds with the European Union on issues such as media freedom and LGBTQ rights, as well as its efforts to oversee its justice system.

He escalated this conflict in July when he refused to implement two decisions of the European Court of Justice which effectively ordered the dismantling of a disciplinary “chamber” which, according to critics, was used by the Polish government to intimidate judges.

The European Court ruled that the chamber had violated the rights of EU citizens, guaranteed by treaties, to live in a justice system free from political interference.

The Polish government argues that national judicial systems fall outside the competence of the EU. The decisions of the European Court in this case were therefore illegal, the government said.

On Thursday, after numerous adjournments, the Polish Constitutional Court backed the government’s position with a majority vote, creating an intensified clash with the European Union.

To complicate matters further, the European Court of Human Rights, a separate institution of the Council of Europe in Strasbourg, has already ruled that at least one of the members of the Polish court has been illegally appointed.

What justification did Poland invoke in the court case?

To back up its arguments on its national courts, Polish officials cited questions raised about European law by the German Constitutional Court in Karlsruhe.

Despite Polish claims, the German court was not actually challenging the supremacy of the law or the court, but questioning the way the European Court had applied EU law. In the Polish case, Warsaw maintains that its own decisions are supreme.

What are the European Union’s tools to respond to them?

Ursula von der Leyen, President of the European Commission, said on Friday that “all decisions of the European Court of Justice are binding on all authorities in member states, including national courts”, adding that “the law of the EU has primacy over national law, including constitutional provisions.

She added: “We will use all the powers that we have under the treaties to ensure that. “

These powers are both legal and financial, although they do not include any possibility of expelling a member state.

If the Polish decision is formalized, Brussels will play hard with Poland.

After years of discussions but little action, the European Union has recently started to exert financial pressure on Poland, as well as Hungary, with which it also disagrees on the rule of law.

Last month, the European Commission asked for fines of up to $ 1.2 million a day against Poland for ignoring previous orders from the European Court to suspend the disciplinary chamber. He also acknowledged that he was withholding $ 66 billion in payments to Poland from an $ 857 billion coronavirus recovery fund due to his challenges to the rule of EU law.

The commission also said it could further cut funding for Polish regions that have declared themselves “LGBT-free zones”. Some regions have already backed down after being cut off from EU aid.

The virus fund’s $ 8.4 billion payments to Hungary were also frozen after the European Commission said Budapest had not done enough to tackle corruption, a delay which Hungary also condemned as political and biased.

Brussels can also bring more infringement cases against Poland to court and try to use Article 7 of the Lisbon Treaty, which could result in the loss of voting rights by a member state. But Article 7 demands a level of unanimity that is almost impossible to achieve. Article 7 proceedings were initiated against Poland in 2017 and Hungary in 2018, but have stalled, in part because the two countries are protecting each other.

The European Union has also started to link the payment of European budgetary funds to respect for the rule of law. This effort is being tested in court by Poland and Hungary.

While Hungary is often equated with Poland in challenging European laws and values, the Hungarian government has complied with the final rulings of the European Court of Justice and has not challenged its authority, although critics claim that he made only superficial adjustments to the laws in order to comply.

What is likely to happen next?

If Poland reaffirms the decision of the Constitutional Court, the European Commission and its lawyers will also study it.

Experts say more rule of law cases involving Poland – and Hungary – will be taken to the European Court, and the likely outcome is that more fines will be imposed and more budget pressure will be applied to those who violate EU law.

In various ways, the European Union will try to defend itself against what it sees as an existential threat and will try to isolate the offenders.

And if nothing else works, Brussels hopes that such actions will affect domestic politics in a way that will lead to a democratic change of government.

In Poland, the ruling Law and Justice party depends on the support of a more right-wing party led by the country’s justice minister, which encourages repeated clashes with the European Union.

But a large majority of Poles are in favor of staying in the bloc, and the endless conflict with Brussels and fears that bloc membership is threatened could turn more voters against the government in Poland and Hungary.