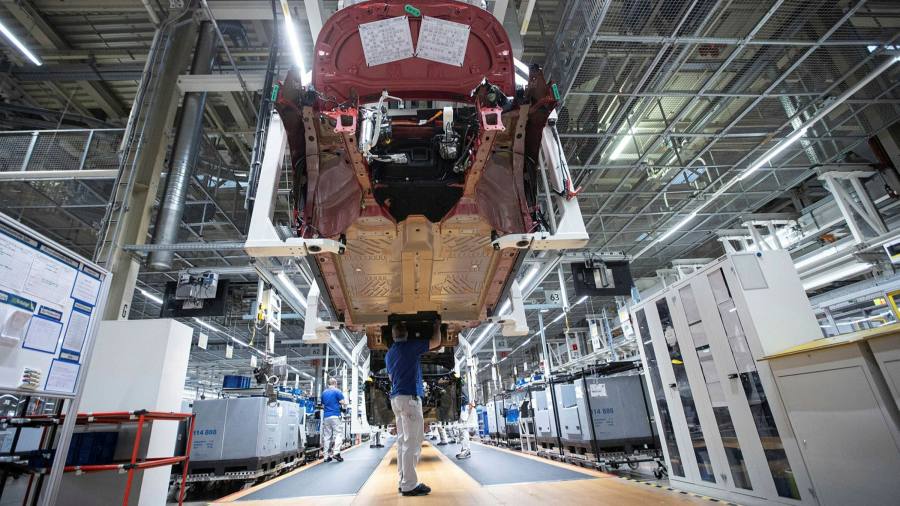 The boss of Volkswagen, Europe’s biggest automaker, has warned that a protracted war in Ukraine is likely to be “much worse” for the region’s economy than the coronavirus pandemic.

Disrupting global supply chains “could lead to huge price hikes, energy shortages and inflation,” Herbert Diess, chief executive of the German automaker, told the Financial Times. “It could be very risky for the European and German economies.”

The warning from one of the continent’s best-known business leaders comes as Western governments step up economic efforts to punish Russia, a key global supplier of raw materials ranging from gas to palladium, for its invasion of the continent. ‘Ukraine.

The sanctions imposed so far – and the prospect that the Kremlin could retaliate by cutting off gas supplies to Europe – have thrown energy markets into turmoil.

“The threat of this war for Germany and Europe is huge,” Diess said, noting that higher inflation could weigh heavily on consumers.

Eurozone inflation hit a new high of 5.8% in February and is expected to reach 7% this year. The European Central Bank meets on Thursday, facing the threat of both higher prices and slowing economic growth.

Europe’s greater reliance on Russia for its energy needs has already led to a split over energy sanctions, with Germany opting not to follow the United States this week in imposing a full embargo on oil and gas. Russia supplies 45% of Europe’s gas imports that heat homes and help fuel the continent’s manufacturing sector.

“For a society like Germany, which depends on Russian energy, on raw materials. . . if you imagine a scenario in which we cut trade relations with Russia, which we would probably have to do if this conflict [does not cease]you could no longer buy energy and that would lead to a situation that could have a huge impact on Europe and Germany,” Diess said.

The VW boss stressed that he was in favor of “maximum sanctions”, but once these are in place “we have to go back to negotiations, to dialogue, because what we don’t want is a war without end in Ukraine”.

VW, which has 500,000 employees in Europe, announced last week the halt of vehicle production in Russia “until further notice”, idling its manufacturing sites in Kaluga and Nizhny Novgorod. Rival German groups BMW and Mercedes have also suspended Russian production or sales.

Echoing the disruption to supply chains triggered at the start of the pandemic in 2020, VW was forced to temporarily halt production at factories in Germany due to parts shortages. He struggled to secure electrical wires which are usually produced by companies based in Ukraine.

Diess warned that VW and the wider European economy could soon face far bigger problems than supply bottlenecks. “We managed semiconductors, Covid. . . fine,” he said, referring to the chip shortage that has plagued automakers for more than a year.

Although VW has 7,000 employees in Russia, the market is not particularly important to its overall business. VW and its other brands Skoda, Audi and Porsche sold just over 204,000 cars in Russia last year, out of 9 million worldwide.