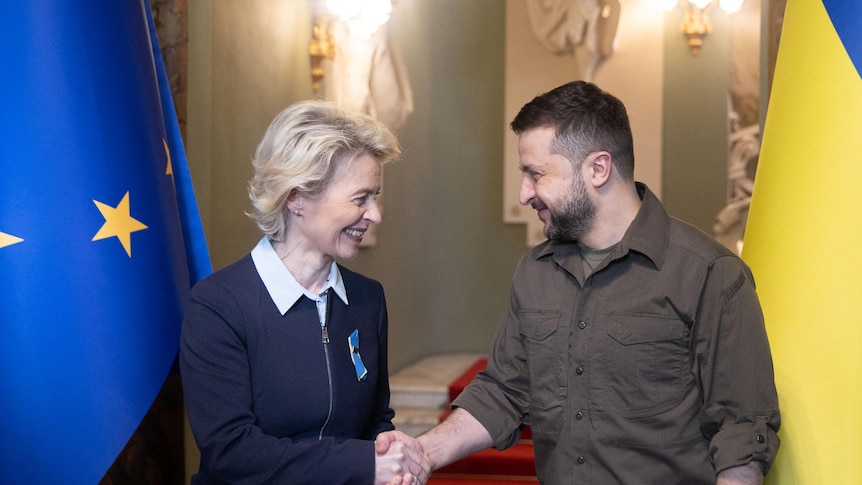 The European Union has said it will return its diplomatic presence to Ukraine and promises to speed up the country’s accession process.

Stay up to date on the Russian-Ukrainian War

A group of intergenerational film, TV, sports and music stars – including Bruce Springsteen, Hugh Jackman, Elton John, Jon Bon Jovi, Jonas Brothers and Billie Eilish – have signed up for a social media campaign to show their support for Ukraine.

On Friday, the social media rally organized by Global Citizen urges governments, institutions, businesses and individuals to help fund humanitarian efforts in Ukraine and other parts of the world. Celebrities are encouraged to use their social media accounts to spread awareness of the effort, using the hashtag #StandUpForUkraine.

Springsteen posted a video on social media on Friday to show his support: “Refugees in Ukraine and around the world need our help now,” he said. “Everyone deserves safe and humane living conditions.” Barbra Streisand tweeted a link to Global Citizen and wrote, “I supported and I hope you will too.”

Ukraine’s prosecutor general’s office said around 67 bodies were buried in a mass grave near a church in Bucha, a northern Kyiv suburb where journalists and returning Ukrainians discovered dozens of bodies in the streets and elsewhere after the withdrawal of Russian troops.

“It means they killed civilians, shot them,” Ms Venediktova said, speaking as workers pulled out dead bodies in the pouring rain. Black body bags lay in rows in the mud.

The attorney general’s office is investigating deaths and other mass casualties involving civilians as possible war crimes. Ms Venediktova said the European Union was involved in the investigation and “we are coordinating our actions”. 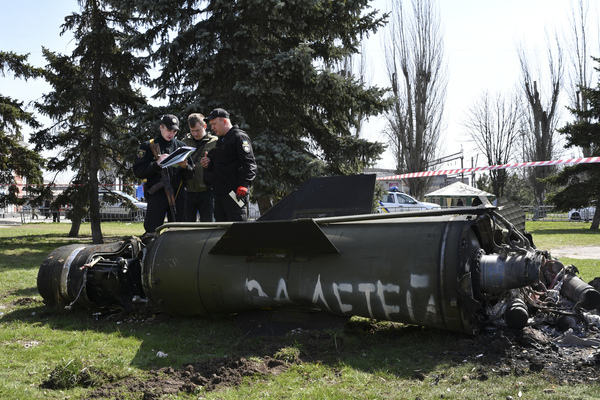 Photos from the Kramatorsk station showed the dead covered in tarpaulins on the ground and the remains of a rocket with the words “For children” painted on it in Russian.

At least 50 people were killed in the strike.

About 4,000 civilians were in and around the station at the time of the strike, responding to calls to leave the area before fighting escalated in the Donbass region, Ukraine’s prosecutor general’s office said.

Letta Tayler says, “We will continue to monitor and document events in Russia and crimes in Ukraine and elsewhere abroad, just as we did when Moscow kept us out during the Soviet era.”

The United States has pledged to help investigate a missile attack that killed more than 50 people in eastern Ukraine.

White House press secretary Jen Psaki said: “What we’ve seen in the last six weeks, or more than that, is what the president himself has called war crimes. , namely the intentional targeting of civilians.

“This is yet another horrific atrocity committed by Russia, beating civilians trying to evacuate and get to safety.

“Where we are now, we will support efforts to investigate this attack, as we document Russia’s actions, hold them accountable, and we will continue to increase security assistance and weapons to help the Ukraine to defend his country.

“Obviously, the targeting of civilians would certainly be a war crime, and we have already labeled a series of actions to date as a war crime, but we will support efforts to investigate exactly what happened. here.”

At least 50 people have been killed at a train station in eastern Ukraine, sparking renewed calls for a ceasefire to allow civilians to evacuate.

The Biden administration on Friday expanded its export restrictions against Russia and Belarus, restricting access to imports of items such as fertilizers and pipe valves as it seeks to increase pressure on Moscow and Minsk.

In a Federal Register posting on Friday, the Commerce Department said it would begin requiring Russians and Belarusians to obtain a special license when seeking to obtain a host of goods from U.S. suppliers and committed to refusing these licenses. Commodities include fertilizers, pipe valves, ball bearings and other parts, materials and chemicals.

This includes import bans on coal, wood, chemicals and other products that are expected to reduce total imports from Moscow by at least 10%.

The measures also prevent many Russian ships and trucks from entering the EU and will ban all transactions with four Russian banks, including VTB.

The coal ban, the first the EU has imposed so far on any energy imports from Russia, will be fully effective from the second week of August.

Maria Avdeeva has made it her personal mission to fight against Russian propaganda.

Before the war, she was a security analyst at a Ukrainian think tank, where she closely monitored Russian disinformation. But when the battle for Ukraine came home, she armed herself with a smartphone to document alleged Russian war crimes.

His videos show how Kharkiv has been torn apart, while revealing how its people still find time for love and music in a war zone.

Ukrainian officials say at least 50 people were killed, including five children, and more than 100 injured in a Russian rocket strike on a railway station in eastern Ukraine, where civilians were trying to evacuate to safer parts of the country.

The state railway company said two Russian rockets hit a train station in the city of Kramatorsk, which was being used to evacuate civilians from areas bombed by Russian forces.

About 4,000 people, mostly elderly people, women and children, were at the station when it was hit, Kramatorsk Mayor Oleksander Honcharenko said.

Russia’s Defense Ministry denied launching a missile strike on the station, saying its military had no assigned targets in Kramatorsk on Friday.

The Russian Ministry of Justice announced on Friday that it had revoked the registration of 15 foreign organizations, including Amnesty International and Human Rights Watch (HRW).

The organizations’ Russian units, which also included the Carnegie Endowment for International Peace, “have been excluded due to the discovery of violations of the current legislation of the Russian Federation,” the ministry said in a statement.

The European Union promises to speed up Ukraine’s accession process, as an attack on a train station in the east of the country left at least 50 people dead.

During a visit to the capital, European Commission President Ursula von der Leyen handed the Ukrainian president a questionnaire to inform the EU’s decision on the country’s membership.

She said it would take “weeks”, “not years”, for the EU to “form an opinion” on granting candidate status to Ukraine.

His visit came after a rocket strike on a railway station in the city of Kramatorsk which was crowded with civilians trying to escape a new Russian offensive in the east of the country.

I will be with you on updates from the war in Ukraine throughout the day. Let’s dive into it.