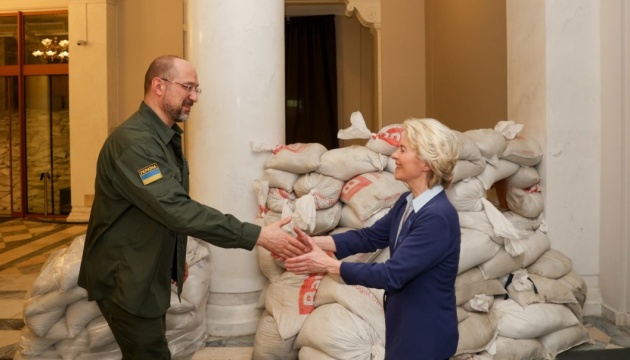 Ukraine hopes that joining the EU’s common customs and payment areas will be the next step on the country’s path to European integration.

“Ukraine is rapidly moving closer to the European Union and hopes that joining the EU common customs and payment areas will be the next step in our European integration. I am grateful to Ursula von der Leyen, President of the European Commission, for this upcoming visit and support to our country,” Shmyhal said.

He said he discussed with von der Leyen the provision of non-repayable grants to Ukrainian small and medium-sized businesses, a recovery plan and the intention to rebuild Ukraine according to European standards. The prime minister assured him that the state was continuing its reforms.

“At the moment, the Ukrainian army is rapidly approaching NATO standards. We are implementing the Green Deal, actively digitizing all public services and hoping that in the near future the EU will approve the membership of the Ukraine to the Joint Customs Transit Regime of the NCTS. We also hope for a positive decision on the inclusion of our country in the SEPA single payment area, the free roaming zone and, of course, the granting of the status of EU candidate,” Shmyhal stressed.

All of these, he added, are practical steps in Ukraine’s integration into the European Union, which will strengthen both sides and help Ukraine defeat the enemy.