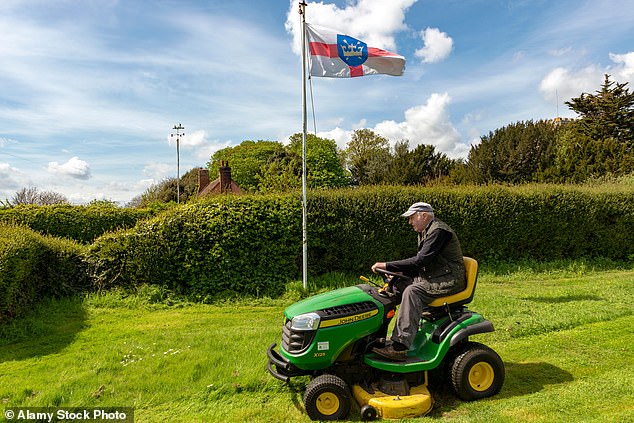 By Anna Mikhailova for the Sunday Mail

A ‘senseless’ EU law requiring ride-on mowers to be covered by owners’ car insurance will be blocked by Parliament tomorrow.

Motorists would have had around £50 added to their annual insurance premiums as a result of the law, which would also have affected golf carts and mobility scooters.

UK drivers will be shielded from the rules as legislation blocking more vehicles needing to be insured is set to pass its final hurdle in Parliament tomorrow.

Mr Shapps told the Mail on Sunday: ‘Leaving the EU was always about doing what is best for Britain, freeing ourselves from absurd laws and getting back in control. Tomorrow we aim to do just that.

He said the Motor Vehicles (Compulsory Insurance) Bill would ‘mark the end of the road’ for the European motor insurance law ‘Vnuk’, which is named after Damijan Vnuk, a Slovenian farm worker knocked off his ladder by a trailer attached to a reverse gear. tractor.

Insurers refused to pay because the accident happened on private land, but in 2014 the European Court of Justice ruled that the claim should have been covered.

The EU then expanded the range of vehicles requiring insurance to include many vehicles used on private land.

Boris Johnson called it “crazy” and a “perfect example of the overregulation that has undermined EU competitiveness”. The change, which would have been introduced had the UK remained in the EU, would likely have cost UK insurers almost £2bn, which they would likely have added to premiums.

Mr Shapps said scrapping the Vnuk Act would save Britain’s motorsport industry from a “potential collapse” as it had to pay £458m a year in extra premiums.

The Motor Vehicles (Compulsory Insurance) Bill is due for third reading in the Lords tomorrow and is expected to receive Royal Assent shortly thereafter.

The President of the EU before his visit to India