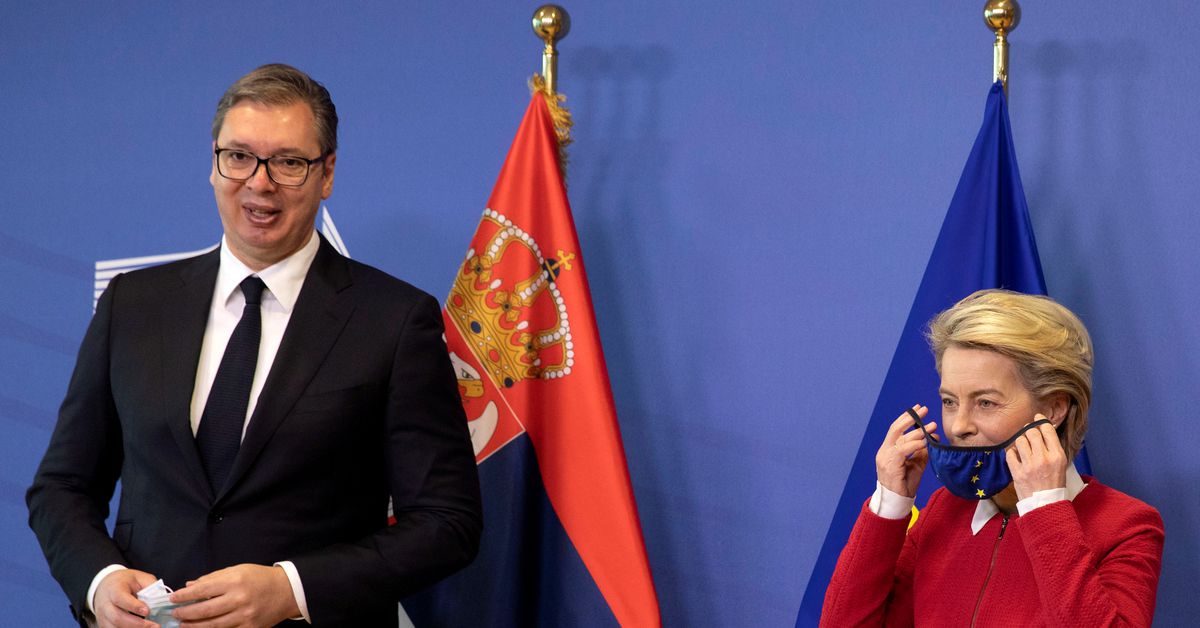 BELGRADE, Sept.30 (Reuters) – The European Commission decided on Thursday to reassure Serbia about its future membership of the European Union after an internal document in Brussels showed that EU states could no longer agree to guarantee to six Balkan countries a place in the bloc.

Ahead of a Balkans-EU summit on October 6 in Slovenia, Reuters reported on Tuesday that the 27 member states had so far been unable to agree on a statement reaffirming their 18-year commitment to future EU membership for the Western Balkan states. Read more

The head of the European Commission, Ursula von der Leyen, took advantage of her stopover in Serbia on Thursday, as part of a regional tour in six countries, to show that Brussels has not forgotten their aspirations.

“I am a strong supporter of Serbia’s entry into the European Union,” she said in a speech for the opening of a railroad.

“We support Serbia’s ambition to open new membership groups as soon as possible,” said von der Leyen, referring to the negotiating chapters, while acknowledging that EU states had the final say to allow Belgrade to move forward.

Serbia, the largest non-EU Balkan country with around seven million inhabitants, is seen as the hub of the region and the EU hopes Belgrade’s influence in the Balkans could help others. to reform. The other five candidates for EU membership are Albania, Bosnia and Herzegovina, Kosovo, Montenegro and North Macedonia.

In February 2018, the European Commission said Serbia could join the EU by 2025, adding that this was a very ambitious goal. This now seems out of reach, as slow progress in rule of law reforms is delaying accession negotiations.

Vucic, a former ultra-nationalist who pivoted to a pro-European stance in 2008, aims to bring his country into the EU, which requires some form of accommodation with Kosovo.

But the Serbs regard Kosovo as an inseparable cradle of their national identity and do not recognize its independence.

To a positive extent, Kosovo agreed on Thursday to withdraw police units from its northern border with Serbia to end an escalation in free movement between the two countries that has prompted NATO to step up its patrols.

Bosnian peace envoy hopes for electoral reform ahead of 2022 vote