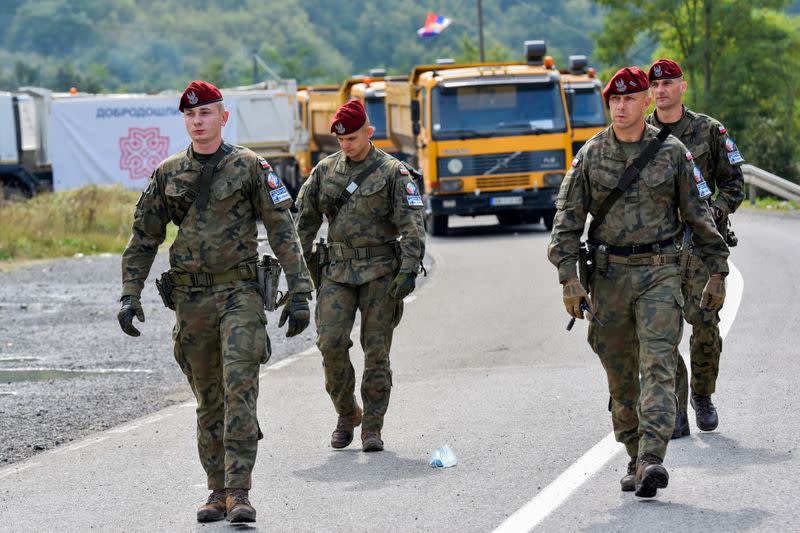 Referring to WWII, European Commission chief calls for reconciliation between Kosovo and Serbia

PRISTINA (Reuters) – The European Union’s chief executive on Wednesday urged Kosovo and Serbia to overcome a growing border dispute and re-engage in mediation talks in Brussels, saying that as a German national she understood the challenges of post-conflict reconciliation.

NATO troops stepped up their patrols in Kosovo on Monday near border crossings which were blocked by local Serbs angry at banning cars with Serbian license plates from entering the country, during the last outbreak between neighbors.

“I know what it means to overcome differences (…) I come from a country which brought World War II to the world and which is responsible for the Holocaust,” said European Commission President Ursula von der Leyen in the capital of Kosovo during a visit to the Balkan region ahead of the EU-Balkans summit on 6 October.

Serbia, Kosovo, Bosnia and Herzegovina, Montenegro, Albania and North Macedonia all aspire to join the EU, but progress has stalled since the EU pledged in 2003 to admit them once they meet all the criteria.

Kosovo declared independence in 2008, supported by the United States, Britain and most EU member states, but Serbia never recognized it, blocking its recognition at the United Nations.

Kosovo and Serbia, which is an official candidate for EU membership, must improve their mutual relations if they are to join the bloc. Their negotiators are heading to Brussels this week for the latest round of EU-mediated talks.

“I hope they will come with a strong mandate to negotiate. This is the best way to resolve the issues and move forward. I deeply believe that it is so important to defuse and come back to constructive dialogue, “von der Leyen said.

“We want a future where Kosovo and all the Western Balkans are part of the European Union,” she added.

Despite the Commission’s strong support for the accession of the Balkans to the EU, the 27 members of the bloc are divided on the speed of “enlargement” and in particular on the advisability of starting accession negotiations with Albania and North Macedonia.

(Report by Fatos Bytyci in Pristina and Robin Emmott in Brussels, edited by William Maclean)

“We need to talk to China,” Europe’s climate chief said ahead of COP26

“If you restore the rules in 2023, it will be impossible for some states to spend the funds” Marques, MEP