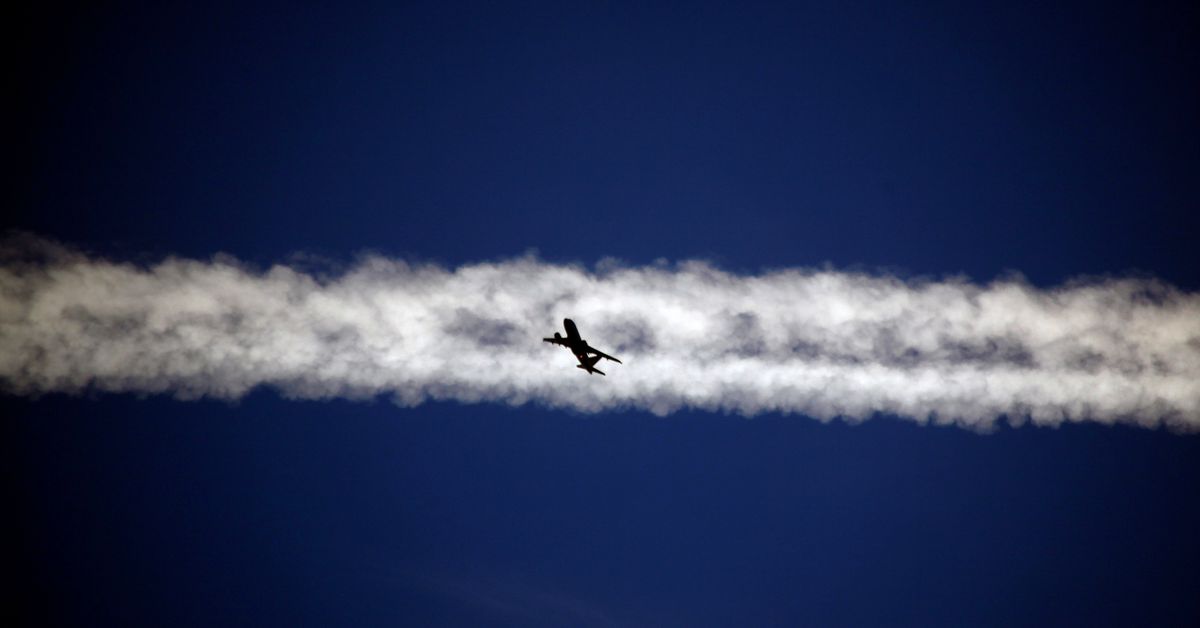 A plane flies under the jet stream of another plane over the Italian city of Padua. Photo taken September 18, 2013. REUTERS / David Gray / File Photo

BRUSSELS, July 4 (Reuters) – The European Commission has drawn up plans to set an EU-wide minimum tax rate on polluting aviation fuels, as it seeks to meet more ambitious targets fight against climate change, according to a document consulted by Reuters.

The European Commission is preparing an overhaul of the EU’s energy taxation, as part of a package it will propose on July 14, to achieve a target of reducing the EU’s greenhouse gas emissions by 55% by 2030, compared to 1990 levels.

This exemption “is not consistent with current climate challenges and policies,” the document said, adding that EU tax rules favor fossil fuels over green energy sources and must be rewritten to support the targets. climatic conditions of the block.

The proposal would impose an EU-wide minimum tax level on energy products supplied as aircraft fuel for flights within the EU.

From 2023, the minimum tax rate for aviation fuel would start at zero and gradually increase over a 10-year period, until the full rate is imposed. The draft proposal did not specify what the final rate would be.

Sustainable fuels, including renewable hydrogen and advanced biofuels, would not be subject to EU minimum taxes during this 10-year period.

The Commission declined to comment on the draft proposal, which may change before its publication.

Introducing the proposals could be politically difficult. Changes in EU tax rates require the unanimous approval of the 27 EU countries, meaning that a single state could veto them.

EU countries are responsible for setting national taxes, although Brussels may set minimum rates at the bloc level.

Levies would be based on the energy content and environmental performance of a fuel, which means that polluting fuels would become more expensive.

The aim is to encourage airlines to start switching to sustainable fuels, such as e-kerosene, to reduce greenhouse gas emissions. Adoption of these fuels has been hampered by high costs, and they represent less than 1% of jet fuel consumption in Europe.

Brussels is also expected to come up with requirements for airlines to use a minimum share of sustainable fuels next month, in order to stimulate demand for them.

The EU minimum tax rate would not apply to cargo flights only, nor to “pleasure flights” and “business aviation”. This could include the recreational use of an aircraft or a business using an aircraft, not hired by the public, to conduct its business. Member States could choose to tax the fuel of these flights on a national basis.

The draft proposal would also introduce minimum tax rates on polluting fuels used for inland waterway navigation, fishing and the transport of goods within the EU.