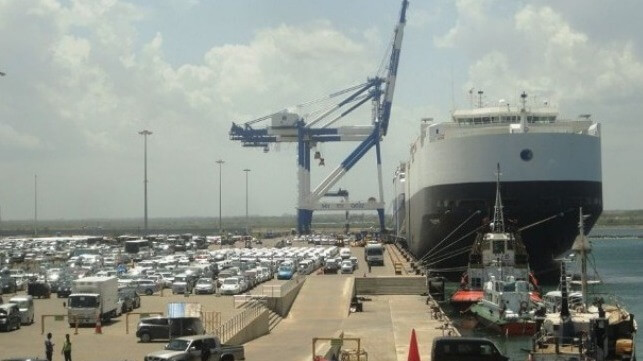 Port of Hambantota – myths and facts

The Port of Colombo is located near the route between the Strait of Malacca and the Suez Canal, which is one of the busiest shipping lanes in the world. Around 36,000 ships pass through this key corridor between Asia and Europe each year, including around 4,500 tankers. Since the port of Colombo has traditionally been used as a transhipment hub for container ships, the Sri Lankan authorities have seen fit to build the new port of Hambantota at the southern tip of the island as a hub for bunkering and repair.

Hambantota Port began small-scale operations in 2010, before China’s Belt and Road Initiative (BRI). The BRI is a contemporary response to Europe’s post-World War II recovery program, better known as the Marshall Plan, which was designed by the United States to support Western European economies after the war. The Belt and Road Initiative has over 140 signatory parties, including EU members. China has so far launched around 3,500 BRI-related projects globally, mostly in low- and middle-income countries, and Hambantota Port is one such initiative.

The Sri Lankan government’s first major loan for Hambantota was secured from the Export Import Bank (Exim) of China for $307 million. This loan came with a condition that China Harbor Engineering Construction (CHEC) would build the port. It is not uncommon for China to insist that its state-owned companies have exclusive rights to build projects financed by Chinese banks.

Contrary to popular belief, debt service charges on loans obtained from Exim Bank were not significant in the overall context of Sri Lanka’s external loan portfolio, loan repayments (including interest ) accounting for less than 5% of Sri Lanka’s loans. total foreign debt repayments. As the second phase of the Hambantota port project has not started, the loans for this phase have not been obtained.

Five port loans (excluding loans obtained for a bunker facility project) were acquired between 2007 and 2014. at $1.263 billion. A possible downside of the concessional loan structure could be that the repayment period was not too long and had a shorter grace period built in, but Chinese loans in such projects are regularly rolled over.

The scandal surrounding the “sale of the port of Hambantota” is not justified because the acquisition operation was not subordinated to the default of Sri Lanka on its external debt towards the Chinese bank Exim; rather, it was a 99-year lease for consideration of $1.12 billion. Sri Lanka did not transfer ownership of the port. The lease arrangement is separate from the loans relating to the construction of the port and it should be noted that the lease was not accompanied by a cancellation of the debt owed by Sri Lanka to China.

Substantial port operations and related revenues are now the exclusive domain of China Merchants Port Holdings Company (CMPort), which received an 85% stake as of December 2017. For appearances sake, Sri Lanka retains a 15% stake in the joint-stock company. . Significantly, foreign countries are not allowed to use Hambantota port facilities for military purposes without obtaining permission from the Sri Lankan government.

The debate over the wisdom of developing Sri Lanka’s second port will continue until the port of Hambantota is booming in commerce. Although government-commissioned feasibility studies concluded that a port at Hambantota was not economically viable, the project continued. Emboldened, CMPort sought an additional 15,000 acres of land around the port to develop an industrial zone. The project’s business model called for bunkering, but the creation of the turning basin itself disrupted the poorly designed project. After the land was dredged and then flooded, a huge boulder was exposed which would be an obstacle to the entry of tankers. It took CHEC nearly a year to blow it up, and speculation abounded as to whether the contractor’s charges ($40 million) were justified.

From the point of view of port construction, facilities have been set up for bunkering, quays and four berths for ships. To protect the port from the swell, two breakwaters measuring 312 meters and 988 meters in length were built using materials excavated during the construction of other parts of the port. The project includes interlocking concrete blocks to protect the port from the high seas. The access channel to the port is 210 meters wide and 17 meters deep to accommodate vessels up to 100,000 dwt. The project provides for an oil depot housing eight tanks for marine fuel, three for aviation fuel and three for liquefied petroleum gas (LPG). The first phase of the project was completed in 2010. The proposed next phase is ambitious and includes the dredging of a deeper basin, the quays, the berm breakwater lining and the fashionable artificial island (a typical feature of the East, the Far East and the Middle East). ).

Business modeling indicated that Colombo and Hambantota are attractive as domestic and transshipment container handlers respectively. As the port of Hambantota floundered commercially in its early years, car-carrying ships were hijacked to give it traffic, but the situation remained dismal: only 34 ships docked at Hambantota in 2012, while 3,667 ships docked in Colombo that year.

Can the port of Hambantota divert bunkering from Singapore?

Singapore maintained its position as the world’s top bunker destination in 2018, with annual bunker sales volume approaching 50 million tonnes. The hallmark of Singapore’s refueling success is transparency, driven by the mandatory installation of flow meters, stringent regulatory controls and a digital one-stop-shop approach. Over the decades, Singapore has developed its refining and storage infrastructure to supply ships with fuel.

For the Port of Hambantota to thrive, Sri Lankan policy makers must appreciate the Asian bunker fuel market. Only about ten ports sell bunker fuel in significant quantities, because ships can travel long distances without refueling. Bunkering destinations in China are behind Singapore with annual sales of 16.9 million tons. Chinese maritime policymakers are turning the Zhoushan archipelago into a bunkering hub and establishing advanced crude oil refineries to produce larger volumes of ultra-low sulfur fuel oil, along with tax exemptions so that marine fuels produced by these refineries are internationally competitive. Provincial authorities have injected nearly $80 million to expand the anchorage and build additional shipping channels in Zhoushan.

Nadir Mumtaz is a maritime analyst based in Pakistan.

The views expressed here are those of the author and not necessarily those of The Maritime Executive.

A crisis is coming to Europe. The only question is, what type?