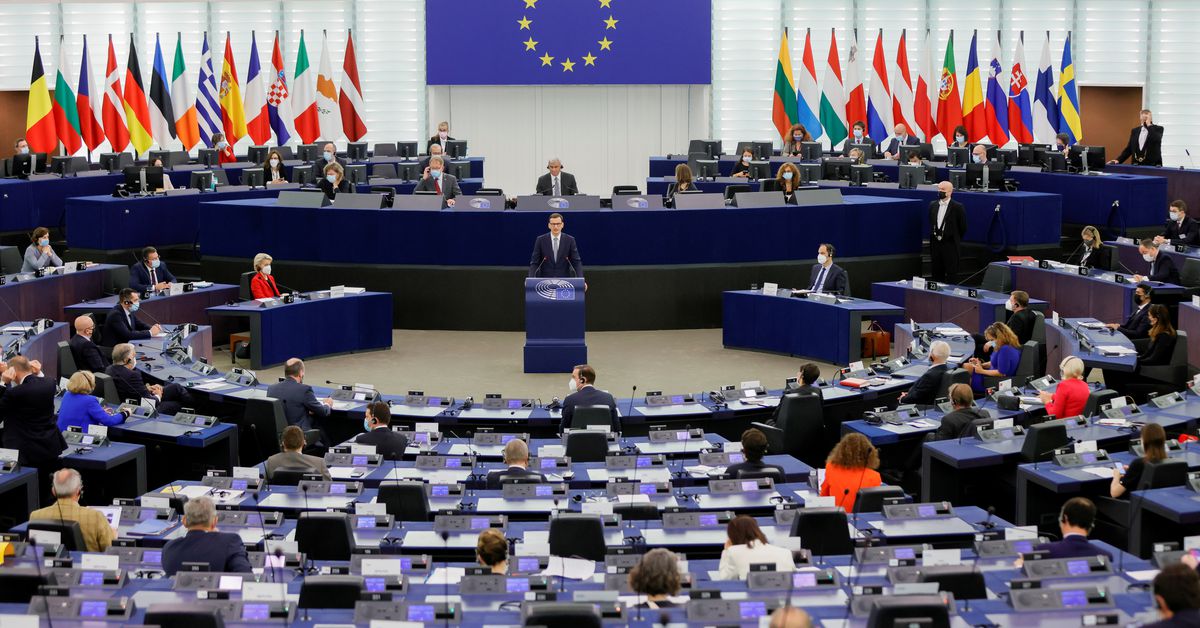 Poland will not bow to EU ‘blackmail’ but will seek to resolve disputes, PM says

Polish Prime Minister Mateusz Morawiecki delivers a speech during a debate on Poland’s challenge to EU rule of law at the European Parliament in Strasbourg, France, October 19, 2021. Ronald Wittek / Pool via REUTERS

BRUSSELS, Oct.21 (Reuters) – Poland will not bow to European Union “blackmail” but will seek to resolve ongoing disputes, Prime Minister Mateusz Morawiecki said, as he arrived on Thursday to defend his nation before a meeting of his fellow leaders in an escalating ideological battle.

Long-standing tensions between the ruling nationalists in Poland and the liberal majority in the bloc have risen sharply since the Polish Constitutional Court ruled on October 7 that elements of EU law were incompatible with the country’s charter.

By calling into question a central principle of European integration, the affair risks precipitating a new fundamental crisis for the bloc – still grappling with the aftermath of Brexit – as well as Poland losing generous European aid.

“Some European institutions are arrogating to themselves the right to decide on issues that have not been attributed to them,” Morawiecki said ahead of two days of talks between the bloc’s 27 national leaders in Brussels.

“We will not act under the pressure of blackmail, we are ready for dialogue, we do not accept the ever expanding competences (of the EU institutions), but of course we will talk about how to resolve the current disputes in dialogue. “

Its wealthy Western counterparts are particularly keen to prevent their governments’ cash contributions to the EU from benefiting socially conservative politicians whom they regard as an infringement of human rights enshrined in European laws.

French Minister of European Affairs, ClÃ©ment Baune, said that “the European project is no more” if the common rules fail.

“If the dialogue does not work, we could resort to various types of sanctions,” he said ahead of the summit, as French President Emmanuel Macron asked Morawiecki to work with the Executive Board to find a solution to the summit. dispute compatible with European principles.

With this decision, Morawiecki’s Law and Justice (PiS) party has raised the stakes of years of increasingly bitter quarrels with the EU over the democratic principles of freedom of courts and the media to the rights of women, migrants and LGBT people.

The Commission has so far banned Warsaw from drawing on 57 billion euros ($ 66 billion) in emergency funds to help its economy emerge from the COVID-19 pandemic. Warsaw also risks more sanctions from the bloc’s highest court.

Sweden, Finland and Luxembourg are also among those determined to align Warsaw and have intensified their criticisms since the PiS came to power in 2015 in Poland, the largest ex-communist country in the EU with 38 million d ‘residents.

For the EU, the latest twist in the feud with Eurosceptic PiS also comes at a sensitive time.

Morawiecki rejected the idea of â€‹â€‹leaving the EU in a â€œPolexitâ€. Support for membership remains very high in Poland, which has benefited enormously from funding from the bloc it joined in 2004.

But Warsaw – backed by Hungarian Prime Minister Viktor Orban – wants to return power to national capitals and has attacked what it sees as excessive Commission powers.

“Poland is one of the best countries in Europe. There is no need for sanctions, it’s ridiculous,” Orban said.

As many grow frustrated with failed attempts to convince Warsaw to change course, German Chancellor Angela Merkel has warned against isolating Poland.

“We have to find ways to come together,” she said, adding that having several legal cases against Poland brought to the EU’s highest court was not a solution.

Her influence, however, is weakened as the veteran of more than 100 summits during her 16 years in power travels to Brussels for what may be her last meeting of European leaders before handing over to a new German chancellor. ($ 1 = â‚¬ 0.8584)