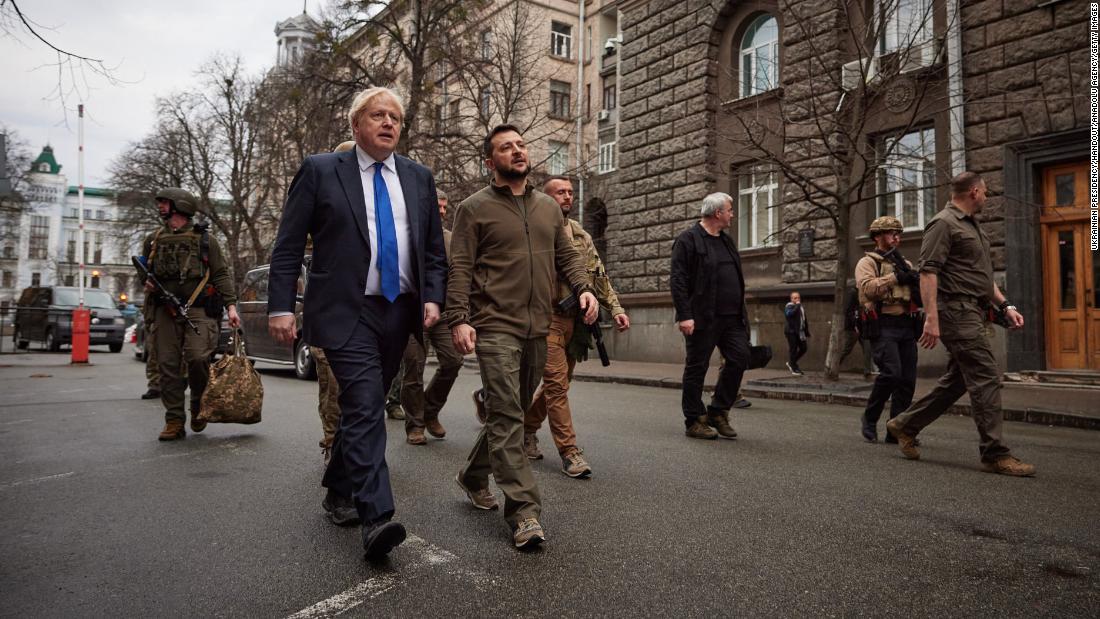 By Carmen A. Brookins Last updated Jul 1, 2022
Share
He is absolutely right. Just as when he described Ukraine as being “on a knife edge” during a meeting with Canadian Prime Minister Justin Trudeau at the G7 summit in Bavaria this week.

Which is strange. Because Johnson has two things in common with Putin that serve the Russian president’s strategic goals more than his support for Ukraine threatens them.

Ukrainians are dying for the right to join the European Union – an international body Johnson fought to leave and Putin worked hard to undermine.

Ukrainians also seek the protections offered by international law – the rules-based global order that Johnson is proudly tearing up – much like the former KBG boss who now rules Russia and who illegally annexed Crimea and invaded Ukraine.

The country that withstood Putin’s invasion is now feeding its young through a Russian meat grinder that is slowly creeping its way into territory to the east.

The soldiers – Ukrainians and foreign volunteers – repeat with increasingly anxious voices that Ukraine is losing its best men. That the mass of Russia prevails and above all it needs the best weapons of NATO – and yesterday.
Johnson told his own nation that “we must arm ourselves for a long war, as Putin resorts to a campaign of attrition, trying to crush Ukraine through sheer brutality,” in a recent Sunday time article.

The British Prime Minister made two pilgrimages to the Ukrainian capital, Kyiv, where he promised arms, money and unwavering diplomatic support to President Volodomyr Zelensky.

“The price to pay for backing down, the price to pay to allow Putin to succeed, to hack huge parts of Ukraine, to continue his agenda of conquest, that price will be much, much higher. Everyone here understands that,” Johnson said in an interview on the sidelines of the G7 summit.
Ukrainians, he said, face real pressures, they have to source their energy elsewhere, but they do it and make the effort and the sacrifice. It is because they see that “the price of freedom is worth paying”, he added.

Johnson has long sought to channel Britain’s World War II-era Prime Minister Winston Churchill. But he convinces very little, no matter how welcomed he is in Kyiv, that he understands that many of the freedoms Ukrainians seek are within the EU.

In 2016, Johnson galvanized support for leaving the EU with a deceptive campaign that falsely promised that £350 billion ($425 billion) of money sent to Europe would return to the Bank of England. .
Johnson promised “sunny uplands” for green and pleasant land. But today Scepter Island is more of a septic island. The freedom to work anywhere in the block – a freedom now lost to Britons. Freedom of access to a market of half a billion people now also lost to the British.

For years, Johnson, the disheveled political wizard, was the golden boy of the British Conservative Party. A favorite of comedy shows; Johnson’s fake clumsiness delivered Brexit and a landslide victory in the general election.

According to his sister, Rachel, a young Johnson said he wanted to be “king of the world”. As an adult, he had to fulfill his ambitions as head of the British government. And he stopped very little to achieve this goal.
But in June, Johnson’s political crown slipped in his face when his Conservative Party was wiped out in two by-elections.
He survived a vote within his party to overthrow him. But he could soon meet another as Tory MPs try to change the rules, meaning he could be kicked out in another confidence vote within 12 months.

These domestic woes may explain his passionate interest in Ukraine. But he carefully avoided any mention of the essence of his fight with Russia, which is, at bottom, Ukraine’s desire to join the European Union.

Meanwhile, Britain is grappling with a near-implosion airline industry facing international flight cancellations and mountains of luggage at Heathrow Airport. The legal system is in disarray as lawyers go on strike claiming their take home pay is below the UK minimum wage. Railway workers staged walkouts and threatened more. Teachers are also set to act as inflation rises ahead of salary increases.
The Organization for Security and Co-operation in Europe says the UK economy will grow by 3.6% this year and not at all next year. Only Russia will do worse, the 38-country organization says in its latest report. It decreases to 4.1%. But he has the expense of invading Ukraine and the consequences of punitive international sanctions to blame.
Britain’s economic malaise cannot be entirely blamed on Brexit. Global growth has slowed due to “unprovoked aggression” from Russia, according to the OECD. It has fallen to 3% this year and is expected to fall to 2.8% in 2023. Covid-19 has also taken its toll.
But UK GDP growth was the highest in the G7 just over a year ago.
Its fall to 19th place out of 20 in the OECD ranking of G20 countries must be partly attributable to the chaos of the supply chain, the slowdown in trade, the shortage of labor in all areas and the drop in investment that followed Brexit.

Despite all its chants of being the Prime Minister to break the political deadlock and “Get Brexit Done”, Johnson’s government has failed to strike a trade deal with Brussels.

On top of that, his government has released a bill that will tear up the only deal it has managed to strike with the EU, the Northern Ireland Protocol, which Johnson himself negotiated and signed.

Enraged by a ruling by the European Court of Human Rights (ECHR), which prevented Britain from sending asylum seekers from England to Rwanda, Johnson’s government is now threatening to leave its jurisdiction.

The World Trade Organization (WTO), child of the General Agreement on Tariffs and Trade (GATT), was a very British vision. The Northern Ireland Protocol is a treaty between Britain and the EU meant to secure the Good Friday Agreement that brought peace to Northern Ireland.

Tearing the fabric of these contracts undermines Britain’s standing in the world.

A British prime minister’s threat to quit the ECHR, a tribunal the British helped set up to establish a pan-European legal system to prevent atrocities in Europe in the aftermath of World War II, must seem bizarre to Ukrainians .

They would definitely like a bit of ECHR right now.

Indeed, it was Ukraine’s desire to join the EU that sparked the revolution against pro-Putin anti-EU President Victor Yanukovych in 2014.

This same desire is probably the main reason for Putin’s invasion. Although his stated excuse for a brazen abuse of international law was to “denazify” Ukraine and prevent the country from joining NATO.
But a democratic, free EU member state on Putin’s doorstep with a large Russian-speaking population is the kind of personal existential threat that must conjure up images of the ignominious demise of Libyan leader Col. Muammar Gaddafi. No dictator wants to end his rule with a bayonet behind his back.
“We all know that Ukrainians are ready to die for the European perspective. We want them to live with the European dream,” said Ursula von der Leyen, President of the European Commission. said.
It’s not a cause Johnson can understand. And he never talks about it. Instead, at the NATO meeting in Madrid this week, he speaks of “allies – all allies” who must “dig deep” and meet NATO’s needs with additional defense spending.

This is not a new argument and NATO members will listen.

But not from a British Prime Minister who has problems at home and cannot be trusted to keep even written promises abroad.