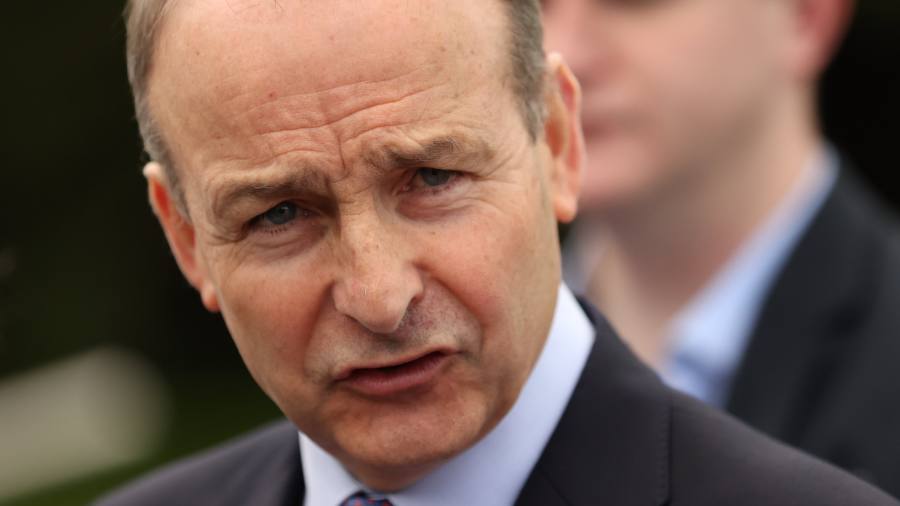 The political stalemate in Northern Ireland, which led to London announcing it would call new elections there, shows that the region’s governance system is “not fit for purpose” and should be reformed, according to the Irish Prime Minister.

Taoiseach Micheál Martin said nationalist and unionist communities in Northern Ireland have been rightly bound to share power since a historic 1998 peace deal that ended three decades of dispute over the region’s constitutional status .

But unionist and nationalist parties have often allied themselves in a system of binding coalitions where one side cannot govern without the other, and Martin has called for reform of the power-sharing arrangements enshrined in the Good Friday Agreement.

“There’s a reason why all this [power sharing] happened, in the early years,” Martin said in an interview with the Financial Times.

But now, almost 25 years later, he added: “There is room for parties to consider changing the system. The system polarizes and it is not suited to its purpose. . . The electoral system should not be a system that constantly reinforces polarization.

Martin said that any change at the system should be considered over the next four to five years. Dublin believes reform belongs to the Northern Irish parties and the Irish and British governments.

Martin was speaking ahead of last Friday’s deadline for the formation of a power-sharing executive in Northern Ireland after the region’s assembly elections at Stormont in May.

The UK government has reacted to the failure to establish a fully functioning devolved administration by stressing its legal obligation to call new elections – which no party wants – although he has not set a date. December 15 is considered likely election day.

The Good Friday Agreement enshrines the principle that the largest parties representing nationalist and unionist communities should have prominent roles in a power-sharing executive.

But this means that each community has a right of veto over the existence of the executive.

For about 40% of the time since the Good Friday Agreement, Northern Ireland has been without a government because one side or the other has refused to participate.

The Democratic Unionist Party, the largest pro-British party, sparked the current crisis by insisting it would not enter government until Northern Ireland’s post-Brexit trade deals were scrapped .

From 2017 to 2020, Sinn Féin, the nationalist party supporting Irish reunification, blocked a power-sharing executive after a renewable energy scandal.

The elections last May were a milestone for Northern Ireland, as Sinn Féin has become the biggest party in the region for the first time – relegating the long-dominant DUP to second place.

The centrist Alliance party climbed to third place, showing a growing number of people who no longer identify with traditional unionist and nationalist lines.

However, the political system excludes the Alliance from government decisions requiring unionist and nationalist majority support.

“There’s a good spread of parties now,” Martin said. “We should explore a modified system.”

The Alliance argued that if the DUP does not want to participate in the executive, this should not prevent the formation of a government.

Jon Tonge, professor of politics at the University of Liverpool, said London “should review the rules of the Good Friday Agreement and end the binding coalitions. . . put them in the bin where they belong,” instead of triggering another election.

London and Dublin are hoping a power-sharing executive can be in place by next April, the 25th anniversary of the Good Friday Agreement, and US President Joe Biden is expected to visit to mark the occasion.

But much seems to hinge on whether the UK and EU can reach a compromise on changes to Northern Ireland’s trade deals that satisfy the DUP.

He takes issue with how the Northern Ireland protocol in Britain’s Brexit deal with the EU demands different trading terms for the region compared to Britain.

The protocol establishes a customs border in the Irish Sea, requiring checks on goods traveling from Britain to Northern Ireland, which the DUP says undermines the region’s place in the UK. United.

Without an agreement between the UK and the EU to revise the protocol that the DUP deems acceptable, fresh elections to the Northern Ireland assembly are likely to largely fail to secure a power-sharing executive. power.