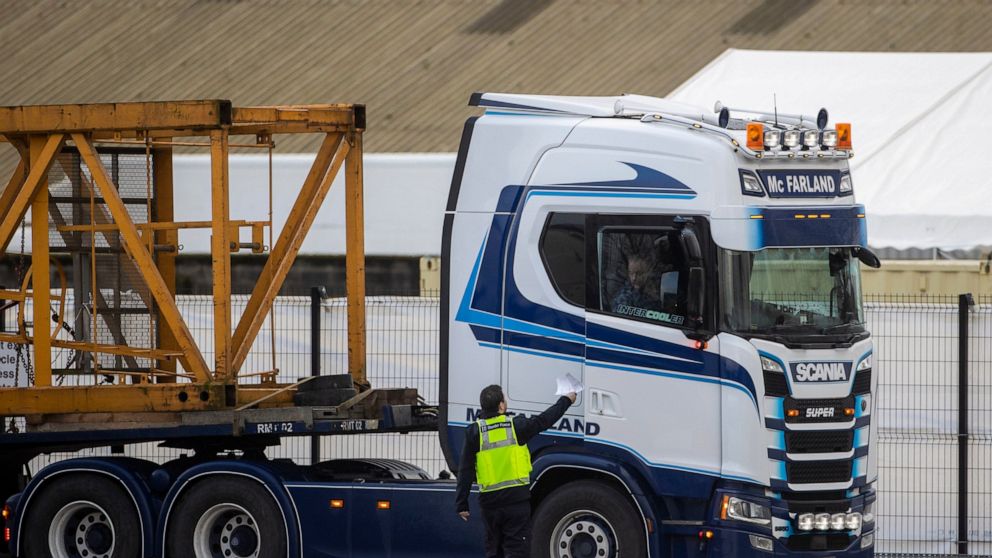 LONDON — Northern Ireland’s agriculture minister on Wednesday ordered a halt to post-Brexit border checks at ports, another complication in a saga that has soured UK-EU relations European.

Edwin Poots said he had received legal advice saying he could halt inspections of agri-food products from the rest of the UK imposed as part of the Brexit divorce terms. He said he had ordered checks to end at midnight – although it was unclear whether officials would enforce the instruction.

Poots represents the Democratic Unionist Party, which leads Northern Ireland’s power-sharing government with Irish nationalist Sinn Fein. The DUP opposes the post-Brexit deal known as the Northern Ireland Protocol and has threatened to quit the Belfast government rather than implement it – a move that would bring the administration down of power sharing.

Sinn Fein Deputy First Minister Michelle O’Neill tweeted: “This stunt is an attempt by the DUP to unlawfully interfere with national and international law.”

Alliance Party assemblyman John Blair accused Poots of “behaving like a wrecking ball” and called for a compromise.

Since Britain left the 27-nation bloc in 2020, relations have soured in Northern Ireland, the only part of the UK that shares a land border with EU member Ireland. As part of the divorce settlement, both parties agreed to keep Northern Ireland in the EU’s single duty-free goods market in order to maintain an open border on the island of Ireland – a key pillar of the peace process in Northern Ireland.

This created a new customs border in the Irish Sea for goods entering Northern Ireland from the rest of the UK, even if they are part of the same country.

The arrangement has caused bureaucracy and supply problems for some businesses, and it has angered British Northern Ireland Unionists, who say the checks are undermining Northern Ireland’s place in the UK and destabilize the delicate political balance on which peace rests.

Months of talks between the UK and EU have failed to find a solution, and Britain has threatened to use an emergency break clause to suspend parts of the divorce deal legally binding Brexit if no solution is found. This would trigger EU retaliation and could escalate into a trade war between the UK and the bloc.

The frosty relationship has thawed somewhat, with both sides seeming positive in recent weeks about the possibility of reaching an agreement.

“And I certainly hope that doesn’t happen,” he said.

Follow all AP stories on post-Brexit developments at https://apnews.com/hub/Brexit