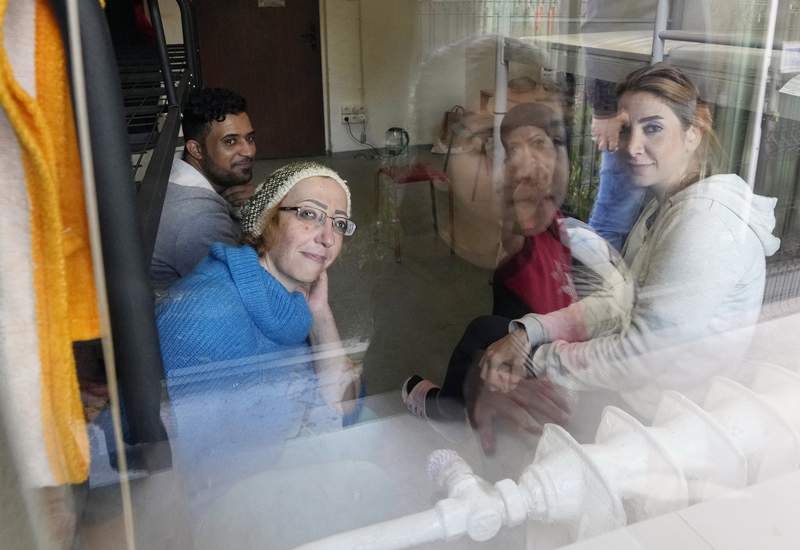 BIALYSTOK – After enduring a decade of war in Syria, Boshra al-Moallem and her two sisters took the opportunity to flee. Her brother, who had fled years earlier to Belgium, had saved enough money for their trip, and rumors were spreading online that a new migratory route to Europe had opened up via Belarus.

But the journey turned out to be terrifying and almost deadly. Al-Moallem was stranded at the Belarus-Poland border for 20 days and was pushed back and forth between armed guards on either side in an area of ​​swamps. She endured cold nights, mosquitoes, hunger and terrible thirst. It was only after she collapsed from exhaustion and dehydration that the Polish guards finally took her to the hospital.

“I didn’t expect this to happen to us. They told us it was really easy to go to Europe, to find your life, to escape (from) the war, ”said the 48-year-old as she recovered this week in a refugee center. in eastern Poland. “I never imagined I would experience another border war.”

Al-Moallem is among thousands who have traveled to Belarus in recent weeks and then been pushed across the border by Belarusian guards. The European Union condemned Belarusian actions as a form of “hybrid war” against the bloc.

Originally from Homs, Al-Moallem was moved to Damascus by war. She said Belarusian officials deceived her into believing travel to the EU would be easy and then used her as a “weapon” in a political fight against Poland. But she also says the Polish border guards were excessively harsh, denying her water and using dogs to scare her and other migrants away, as the guards pushed them back and forth to Belarus.

For years, people fleeing war in the Middle East have made dangerous journeys across the Mediterranean Sea and the Aegean Sea, seeking safety in Western Europe. But after the arrival of more than a million people in 2015, the countries of the European Union erected concrete walls and barbed wire, installed surveillance drones and reached agreements with Turkey and Libya to remove migrants.

The much less protected path to the EU through the forests and swamps of Eastern Europe only appeared a road after the EU imposed sanctions on the regime of authoritarian Belarusian President Alexander Lukachanko, following erroneous elections and a severe crackdown on demonstrators.

Suddenly, people from Iraq, Syria and elsewhere flew to Minsk, the capital of Belarus, on tourist visas, then drove – many apparently aided by smugglers – to the border. .

If that’s the point, it works. Poland has refused entry to thousands of migrants and refused them to seek asylum, thus violating international human rights conventions. The country has seen its behavior criticized by human rights groups at home and abroad.

Stanislaw Zaryn, spokesperson for Polish special services, told The Associated Press that Polish forces are still providing assistance to migrants if their lives are in danger. In other cases, while it may hurt them not to help, Zaryn has insisted that Poland must stand firm and defend its border as it is the target of a high-stakes standoff with Belarus, which is supported by Russian President Vladimir Putin.

“Poland believes that it is only by completely securing our border with Belarus that we can stop this migratory route, which is a route artificially created by Lukashenko with the support of Putin. It was created artificially to take revenge on the whole of the European Union, ”Zaryn said.

With six migrants found dead along the border so far, human rights defenders are dismayed and insist that Poland must respect its obligations under international law to allow migrants to seek asylum and not not push them across the border.

“The fact that these are Lukashenko’s political actions directed against Poland and against the European Union is obvious to us,” said Marianna Wartecka of the refugee rights group Fundacja Ocalenie. “But that does not justify the actions of the Polish state.”

Lukashenko denies that his forces are pushing people towards Poland, but his state media have taken hold of Poland’s response to portray the EU as a place where human rights are not respected.

After traveling from Syria to Lebanon, al-Moallem, who was an English teacher in Syria, flew to Minsk, and from there took a taxi with his sisters and a brother-in-law to the border. Belarusian forces then guided the group to a place to cross in Poland.

Crying as she told her story in English, Al-Moallem said Belarusian forces told them, “It’s a very easy way to get to Poland. It is a swamp. Just cross the swamp and go up the hill, and you’ll be in Poland. “

But all they would do was react, “Go to Belarus. We are not responsible for you.

This happened over and over again, with Belarusian forces taking them back, sometimes giving them nothing more than a little bread and then returning them the following night.

During her ordeal, she took videos of desperate migrants with her phone and posted them on Facebook. His videos and his AP account provide rare eyewitness accounts of the border crisis.

Such scenes take place largely out of public view because Poland, after Lithuania and Latvia, has declared a state of emergency along the border, preventing journalists and rights defenders humans to get there.

The Polish government’s measures, which also involve bolstering border defenses with soldiers, are popular with many Poles. The ruling conservative party, which took a strong stand against migrants in 2015, has seen its popularity strengthen in opinion polls amid the new crisis.

Despite Poland’s best efforts, reports indicate that some asylum seekers have managed to enter the EU undetected and have moved further west, often to reunite with relatives in Germany.

Al-Moallem says she and her relatives plan to leave the center where they are currently staying and cross the open EU borders to join their brother in Belgium. They plan to seek asylum there. All she wants, she said, is for her family to be reunited after years of trauma and “feel safe”.

Copyright 2021 The Associated Press. All rights reserved. This material may not be published, broadcast, rewritten or redistributed without permission.

Politics This Week | The Economist