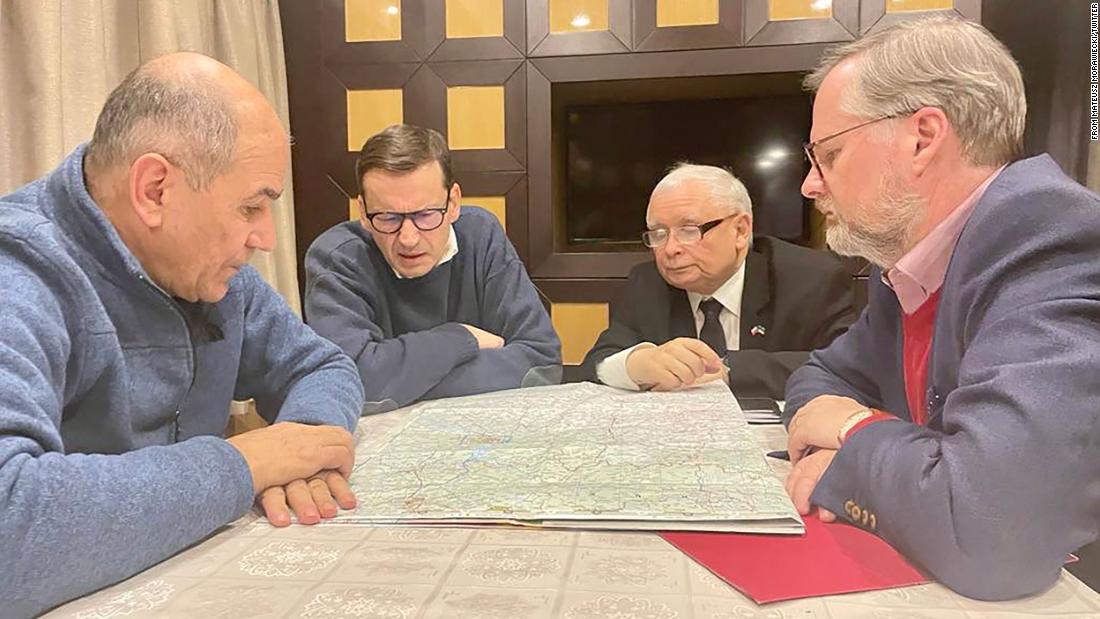 At the end of the meeting, Polish Prime Minister Mateusz Morawiecki called on the European Union to “very quickly” grant candidate status to Ukraine.

“We are here to admire your fight against such a cruel aggressor. This invasion must stop,” Morawiecki said. “Those who are killed by (Russian President Vladimir) Putin, they can never be forgotten. They are not forgotten.”

He also pointed out that Poland, which shares a 310-mile border with Ukraine, would try to help Ukraine organize its defenses.

“We will never leave you alone. We will be with you. Because we know that you are not only fighting for your homes, for your freedom, for your safety, but also for ours,” he said.

Czech Prime Minister Petr Fiala said having a face-to-face discussion with Zelensky was “something really special”.

“The main objective of our visit and the main message of our mission is to tell our Ukrainian friends that they are not alone, that Europe is on your side,” Fiala said.

Fiala said he wanted to assure Ukrainians that we are “hosting your wives and children” and providing them with “shelter” in the Czech Republic.

The Czech Republic has now taken in 250,000 refugees, according to the prime minister, who said they “will continue to provide more help and support”.

Zelensky thanked EU leaders for their “wonderful support” as “so many other ambassadors left Ukraine because of the full-scale Russian invasion”.

“The most important thing is that we really trust these leaders,” Zelensky said. “When we talk about security guarantees, our future in the European Union, or when we talk about sanctions policy, we are 100% certain that whatever we discuss, whatever we say, will lead to a positive result for our country.”

He continued that with “friends like that”, Ukraine “can win”.

The purpose of the visit is “to confirm the unequivocal support of the entire European Union for Ukraine’s sovereignty and independence and to present a broad spectrum of support for the Ukrainian state and society”, said a government spokesman.

They said the trip to Kyiv had been organized in agreement with European Council President Charles Michel and European Commission President Ursula von der Leyen, and added that the international community would be informed of the delegation’s visit by the through international organizations, including the United Nations.

“In these defining times for the world, it is our duty to be where history is made, because it is not about us, but about the future of our children who deserve to live in a world freed from tyranny,” Morawiecki said in a Facebook post on Tuesday.

Morawiecki said he and the other leaders were traveling to Kyiv to “show Ukrainians our solidarity” and denounced “Putin’s criminal aggression against Ukraine”.

The EU leaders’ visit came hours after kyiv came under attack from several directions on Tuesday. Four people were killed when a 16-storey building in a residential area in western Kyiv was bombed, the city’s mayor, Vitali Klitschko, said. At least four residential buildings were hit by airstrikes on Tuesday morning.
Before the meeting with Zelensky on Tuesday, the Slovenian Janša sent a message to Ukraine, post on Twitter“Thank you not only for defending your homeland and Europe as a territory, but also for defending the very heart of European values ​​and our way of life. Your fight is our fight and together we will win.”

More than 3 million people have fled Ukraine since the Russian invasion began on February 24, the International Organization for Migration announced on Tuesday.

Poland has been the largest host country for Ukrainian refugees, with more than 1.8 million people entering the country on Tuesday, according to the United Nations High Commissioner for Refugees (UNHCR).

Head of UNHCR Filippo Grandi praised Morawiecki and his government for their “outstanding support” to Ukrainian refugees.
Poland has also offered a plan to send fighter jets to Ukraine, although this was rejected by the United States.
Meanwhile, the Czech Republic has stepped up its military aid to Ukraine, with an additional aid package worth at least $31.5 million, in addition to the cargo of $8.5 million that she already sent in February.

Prime Minister Fiala said last month that his country was sending “machine guns, submachine guns, sniper rifles and pistols and their corresponding ammunition worth CZK 188 million”, to support the Ukrainian government in its fight against Russia.