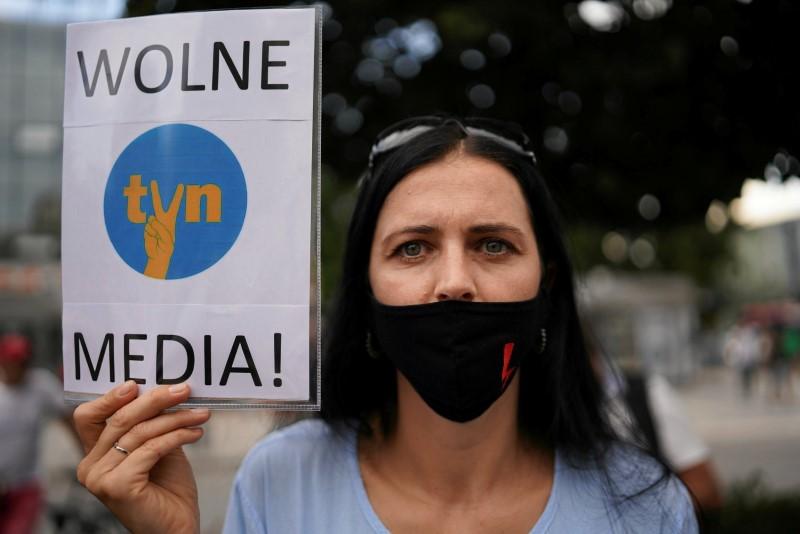 WARSAW (Reuters) – Thousands across Poland demonstrated on Tuesday in defense of media freedoms, opposing a bill that critics say could shut down a government-critical US broadcaster.

Parliament is due to vote on the legislation on Wednesday.

The vote to tighten the rules on foreign ownership of Polish media threatens to degrade relations with Washington and deepen European Union concerns about democratic standards in the eastern bloc. Issues such as judicial independence and LGBT rights have already brought Poland and Hungary into conflict with Brussels.

In Warsaw, one of some 80 cities where demonstrations were held, people held up placards with slogans such as â€œFree media, free people, free Polandâ€.

“If it happens (that TVN24 loses its license) … it’s the end – there is no democracy, no free speech,” said designer Iwona Leliwa-Kopystynska, 66.

Footage from TVN24 showed demonstrators on the roof of the Ministry of Culture in Warsaw with banners reading “Free media” and “Poland without fascism”.

The amendment to the Broadcasting Law would strengthen the ban on non-European companies controlling Polish broadcasters.

“Would we want the Polish media (…) to be acquired without any regulation by anyone around the world without any hindrance?” Prime Minister Mateusz Morawiecki asked reporters earlier.

While Morawiecki’s Law and Justice (PiS) party says it wants to prevent countries like Russia or China from taking control of Polish broadcasters, critics say it aims to gag TVN24, the most popular news channel from Poland, whose license expires on September 26.

TVN24’s parent company, TVN, is owned by US media group Discovery Inc. through a company registered in the Netherlands, in order to circumvent the ban on non-European companies owning more than 49% of Polish media companies.

TVN called the bill, which would close this loophole, an attempt to limit media freedom.

The PiS has long argued that foreign media groups distort public debate in Poland in a way that harms Polish interests.

But the bill risks upsetting an important ally.

TVN, estimated at over $ 1 billion, is the largest US investment in Poland. US State Department adviser Derek Chollet said future US investments could be in jeopardy if TVN24’s license is not renewed.

Hungarian public broadcasters have largely become government spokespersons, while several other media have been shut down or taken over by pro-government interests.

Critics say that since the PiS came to power, the Polish public broadcaster, TVP, has become an outlet for government propaganda.

Reporting by Alicja Ptak and Pawel Florkiewicz in Warsaw, additional reporting by Krisztina Than in Budapest, written by Alan Charlish; Editing by Kevin Liffey