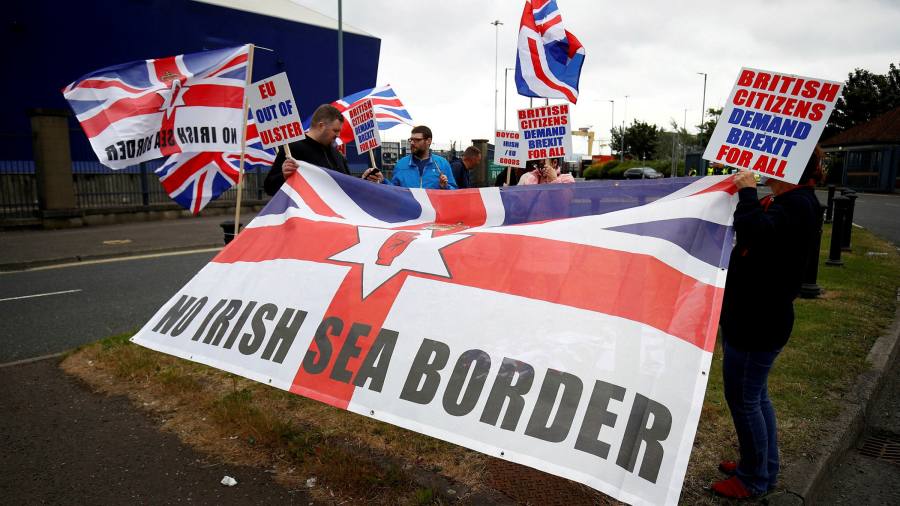 Did you follow the news this week? Take our quiz.

The UK government is preparing legislation that will give ministers sweeping powers to tear up the post-Brexit deal governing trade in Northern Ireland, risking a fresh confrontation with Brussels.

Two people familiar with the internal discussions said Boris Johnson, Prime Minister, and Liz Truss, Foreign Secretary, had in principle approved plans to introduce a Northern Ireland Bill at the start of the next parliamentary session , which will begin next month.

Whitehall insiders said the Johnson administration was drawing up the plans partly in anticipation of a constitutional crisis if the mainly Protestant Unionist parties – which have all rejected the Northern Ireland Protocol – refuse to rejoin the Sharing executive of power in the region after the May 5 elections.

Under proposed legislation, which has not yet been presented to cabinet, ministers would have unilateral powers to disable key parts of the protocol in UK law, including border checks on goods traveling into the region from Great Britain.

Thank you for reading FirstFT Europe/Africa. Here’s the rest of the news from the day — Gary

The latest news from the war in Ukraine

2. English cities warn that ‘unrealistic’ housing targets threaten economic growth The UK government will miss its clear target of building 300,000 more homes a year by the mid-2020s and is imposing unrealistic targets that will undermine its leveling scheme, business groups and councils have warned.

3. Elon Musk unveils $46.5 billion funding plan for Twitter offering The Tesla chief executive took on $25.5 billion in debt — including a $12.5 billion margin loan against his shares in the electric vehicle maker — from banks led by Morgan Stanley. It said it would also provide $21 billion in equity for what would be one of the largest leveraged buyouts in history.

4. WHO pushes Pfizer on Covid drug price transparency The World Health Organization has urged pharmaceutical giant Pfizer to be more transparent about the price of its antiviral drug Paxlovid after recommending the drug to treat Covid-19.

Digital Services Act The EU is due to unveil a new law on Friday to force Big Tech to control illegal content and keep users safe online.

French presidential election France will vote on Sunday on whether to give President Emmanuel Macron a second five-year term or hand over the presidency to his right-wing challenger Marine Le Pen. Macron has accused his rival of being beholden to Vladimir Putin and risking civil war with plans to curb Islamism, but there are signs French Muslims have lost faith in him.

Register here to attend the FT’s inaugural Crypto and Digital Assets Summit on April 26-27. Be sure to check out the full list of events, including remarks from Changpeng Zhao, Founder and CEO of Binance.

Macron, Le Pen and France’s long battle between order and dissent France’s thirst for radical social and political reform, along with deep popular frustration with established elites, is reflected in the country’s growing divisions. Was Charles de Gaulle right to say that the French were ungovernable?

Will women change the future of management? Office temperatures – usually set at levels that suit men – are a tiny reflection of a larger truth: women have left a minimal imprint on “official” management theory and practice. Are labor and business demographics due for an overhaul?

Few Galleries Selling NFTs Despite Hype According to online sales platform Artsy’s 2022 Gallery Insights report, only 11% of galleries sold NFTs in 2021, while 67% said their clients hadn’t even surveyed them. Of those who sold NFTs, half said the total value of their sales was $5,000 or less.

“No one is remotely real around the royal family” Tina Brown, former editor of The New Yorker, talks about her new book on the British monarchy, her role as a “transatlantic” and her knowledge of everyone from Obama to Malala.

The fun way to predict the unexpected Games can help us predict future crises we didn’t know were possible, writes Tim Harford, from global pandemics to wars and how they play out. The games are also fun, which makes their lessons much easier to learn.

The latest FT game puts you in charge of solving the climate crisis. Can you reduce emissions to net zero by 2050 while protecting nature and sustaining livelihoods?

Newsletters recommended for you

Inside politics – Join us for analysis of the latest UK political news, plus polls and a dose of culture – from new columnist Stephen Bush. register here

To work — Find out what’s changing the world of work with Isabel Berwick, editor of Work & Careers. register here

Liberalism, not Hungary, is the future of Eastern Europe