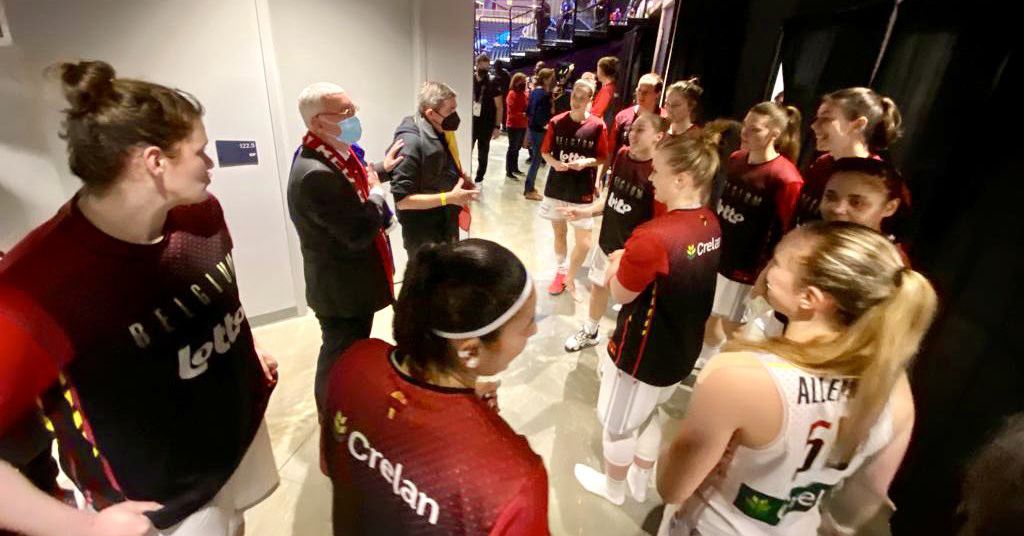 In this Emma Meesseman article of the week, I will write about the Belgian cats who received a visit from their country’s ambassadors last night after their match against the United States women’s national basketball team in the playoffs of the FIBA Women’s Basketball World Cup 2022. Belgium lost, 84-75. For the summary, click here.

As you know, Washington, DC is the capital of the United States. As such, DC has the embassies of virtually every country with which Americans have established relations. The bulk of the embassies are just west of Dupont Circle on Massachusetts Avenue, called “Embassy Row”. Japan and South Korea have embassies here, as well as Latvia and Greece, among others.

There are of course exceptions, such as America’s closest friends in the 18th century: France and the Netherlands. The French Embassy is directly across from Georgetown University Hospital. And the Dutch Embassy is next to the Levine School of Music in the eastern part of Van Ness. On the west side of Van Ness, you can find the Israeli Embassy. And the Canadian Embassy is less than half a mile from Capitol Hill.

(Yeah, I’ve been to most of these embassies through tours, pre-COVID of course.)

So where was I? Ah yes, BELGIUM! (My rambling gets to me!)

Unlike the other countries I’ve mentioned, the Belgian Embassy is on the first floor of 1430 K Street NW, the same block (but not the building) as The Park at 14th Lounge and a few blocks north- is from the White House.

And yesterday, Jean-Arthur Régibeau, Belgium’s ambassador to the United States, was on hand to watch his country’s women’s basketball team take on the USA Basketball women’s national team. Despite the loss, the Belgian Cats came back stronger than I expected in the fourth quarter. And the crowd, which was visually 60-40 Belgian vs. American, was quick to cheer loudly for a Cats field goal, or to quiet “USA” chants in the final minutes!

After the game, Ambassador Régibeau met with the Cats to congratulate them on their performance.

so happy to meet @TheBelgianCats after this excellent performance. I wish them good luck for their next game on Sunday.
We enjoyed watching top competitors, as well as hundreds of cheering fans. pic.twitter.com/AWawJrnrBx

Belgium is also home to most of the institutions of the European Union, including the European Commission and Council which are based in Brussels, a few blocks from the Belgian federal government and the Flemish regional government. It is therefore not surprising that Stavros Lambrindis, the EU ambassador to the United States, is also present.

For the Americans present last night, it was a tune-up match against a world power. Of course, Team USA led up to 23 points, in part because their defense consistently doubled and tripled Meesseman’s team to pass the ball to him and minimize his impact for much of the game. She scored 15 points, took 10 rebounds and delivered 5 assists despite the Americans’ efforts to contain her.

But as I wrote in the recap, Team USA also didn’t play as a cohesive unit, especially early on. Mystics guard Ariel Atkins started, scoring just 4 points, but had 2 interceptions and played 27 minutes last night as the Cats committed 17 turnovers while being a little too satisfied with their offense.

As for the Belgians in attendance, especially those living in America, it was a rare opportunity for them to see their national team perform on the world stage. And more generally, this team has won the hearts of women’s basketball fans around the world with their meteoric rise since 2017. I would be lying to you if I told you that I find it hard not to support them because of this. But last night, I was still happy to root for Team USA instead, whether that game was a friendly or a gold medal game.

After two games, Belgium are 1-1 in Group D. The Cats are just one win away from securing their second straight World Cup berth. Their final match is tomorrow at 3:30 p.m. ET when they face Russia.