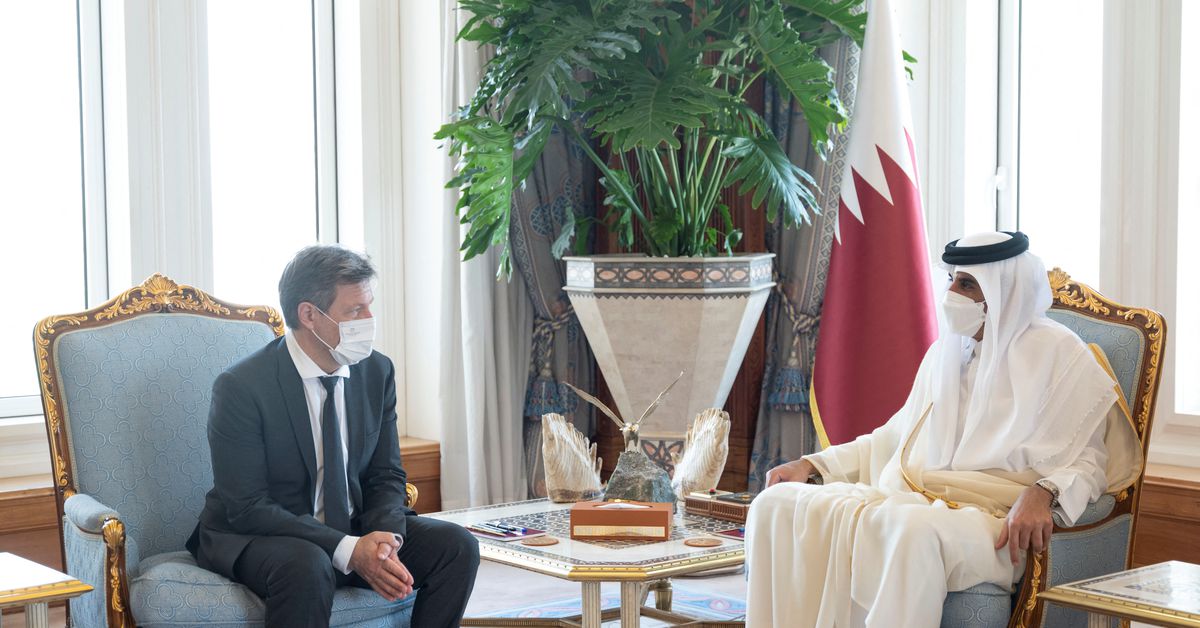 LONDON, May 9 (Reuters) – Germany and Qatar have struggled in talks over long-term liquefied natural gas (LNG) supply deals due to differences over key terms, including the duration of any contract, three people familiar with the talks told Reuters.

Germany, which aims to reduce its carbon emissions by 88% by 2040, is reluctant to commit to Qatar’s conditions to sign at least 20-year agreements to secure the massive volumes of LNG it has. needed to reduce its reliance on Russian gas, the sources said.

Qatar, the world’s largest LNG supplier, is also specifying conditions such as a destination clause that would prevent Berlin from rerouting the gas to other parts of Europe, a condition the European Union opposes. Read more

Tough talks between Qatar Energy and German utilities highlight the challenges the EU faces in its ambition to diversify away from Russian gas as the German government struggles to balance any deal with its reduction targets of carbon.

Germany consumes around 100 billion cubic meters (bcm) of natural gas per year, with around 55% coming from Russia and smaller volumes supplied from the Netherlands and Norway.

It supported the construction of two LNG terminals and leased four floating storage and regasification units (FSRU) as a palliative. Read more

What it needs now is LNG itself. Read more

“The issue of the duration of LNG contracts potentially jeopardizing Germany’s decarbonization goals is part of ongoing discussions with Qatar,” one of the people said, adding that Germany was also in competition. with other countries for LNG from Qatar.

Qatar’s government communications office declined to comment on the ongoing negotiations. Germany’s economy minister was not immediately available for comment.

Qatar is also firm on oil indexing, tying contracts to the price of oil, which represents the pricing structure of their alternative sales in Asia, while the Germans seek a link to the Dutch benchmark TTF. , Felix Booth, head of LNG at energy intelligence company Vortexa, said.

“Qatar is at the helm of these discussions, with a new project underway, strong interest in their volumes and a long history as a reliable supplier,” Booth said.

“To secure this supply, it is expected that the German team will have to accept a traditional oil-linked pricing structure. Leaving the European buyer with significant financial exposure to European hub prices,” he said. -he adds.

German Economy Minister Robert Habeck visited Qatar in March, along with officials from German utilities RWE (RWEG.DE) and Uniper (UN01.DE), to discuss buying additional volumes , but no agreement has been reached so far.

RWE, Germany’s largest electricity producer, in 2016 reached an agreement with Qatargas, a unit of Qatar Energy, under which up to 1.1 million tonnes of liquefied natural gas will be delivered annually to the north -western Europe by the end of 2023.

German gas companies will return to Qatar in May to resume talks, said two separate people familiar with the process.

They said the Emir of Qatar, Sheikh Tamim bin Hamad Al Thani, will visit Germany in the second half of May to sign a partnership agreement between the two countries. Read more

However, this does not mean that long-term LNG deals will be struck, as the partnership aims to pave the way for a significant increase in long-term Qatari LNG deliveries to Germany, they added.

Qatar’s sovereign wealth fund, the QIA, has about $20 billion invested in Germany, with stakes in Volkswagen (VOWG_p.DE) and Deutsche Bank (DBKGn.DE).

Germany hopes for a possible bilateral partnership with Qatar where German companies such as Siemens Energy (ENR1n.DE) and others could help Doha in its attempts to implement a sustainable development plan launched at the end of the year. last year.

“There must be a gentleman’s agreement between the Qataris and German companies, that LNG should only be the first step in a longer collaboration between the two countries,” said one of the people, a source from German industry.

Reporting by Marwa Rashad in London, Andrew Mills in Doha and Christoph Steitz in Frankfurt; Additional reporting by Markus Wacket in Berlin; Editing by Veronica Brown and Alexander Smith