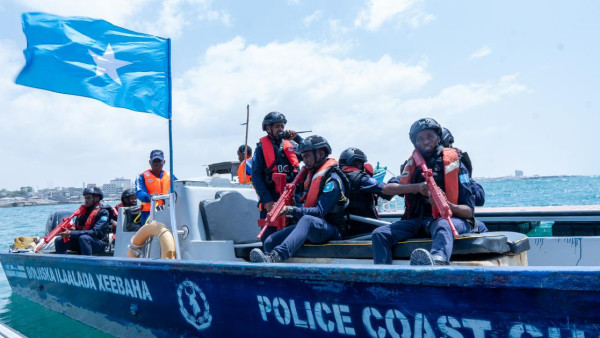 16e In July, the European Union Capacity Building Mission in Somalia (EUCAP Somalia) celebrates its tenth anniversary. Over the past decade, the mission has helped build Somali institutional capacity in the maritime and policing domains, as well as advance legal reform and the rule of law.

First established as EUCAP Nestor, a regional civilian maritime capacity building mission focused on counter-piracy, in July 2012, the mission was renamed EUCAP Somalia in 2016, with a focus on partner Somalian and based in Mogadishu. Currently, the mission is composed of 173 members and benefits from the direct contribution of 15 European countries which second part of the staff.

The mission is part of the EU’s comprehensive approach to Somalia and was launched to complement the two other EU Common Security and Defense Policy (CSDP) operations : EUTM Somalia military training mission and EUNAVFOR operation Atalanta against piracy.

“EUCAP Somalia provided the maritime authorities with the necessary skills and equipment to perform a basic coastguard function. Away from the coast, he also helped train some 700 Federal Darwish, a robust police force mandated to secure territories liberated from Al Shabbah control. Today, Somalia still faces enormous internal security challenges. But thanks to our CSDP efforts, piracy is no longer a major threat to international shipping off the Horn of Africaunderlined HR/VR Josep Borrell on the occasion of the 15th anniversary of the CSDP in May 2022.

Certainly, the achievements of the mission were only possible thanks to the fruitful collaboration with Somali actors, notably the Ministry of Internal Security (MoIS), the Ministry of Ports and Maritime Transport, the Somali Police Force (SPF), Somali Maritime Administration (SMA), INTERPOL, Bureau (BCN). Also, with other international partners such as UNODC, UNSOM, UNOPS, IMO and INTERPOL.

In the maritime domain, the mission provided training facilities for the search and seizure of boarding of vessels – the so-called “ship in a box” -, training and equipment in the three main ports (Mogadishu, Bossaso and Berbera) and contributed to the construction of the Somali Police Maritime Unit Headquarters in Mogadishu in collaboration with EU partners.

The Mission also strengthened the capacity of the Somali Maritime Administration (SMA) to set the framework for its initial operational capabilities, with the provision of technical maritime services, and supported the accession and integration of international maritime conventions into the Somali legal framework. More recently, EUCAP Somalia was the first EU mission to deploy a specialist team to deliver tailored maritime training, including on how to maintain maritime equipment.

In the area of ​​policing, in collaboration with other international partners, the mission promoted police development and increased the interoperability of Somali security forces.

At the strategic level, the Mission contributed to the revision of the Somali Transition Plan 2021-2022 in light of the withdrawal of the African Union Forces (AMISOM) and the African Union Transition Mission in Somalia (ATMIS ), emphasizing the transition from “military to police” to increased security through civilian police.

The Mission worked with INTERPOL’s Somali BCN to increase its capacity to fight transnational organized crime and to comply with 19 INTERPOL policies, 11 of which have already been implemented. The Mission is also supporting the development of the Action Plan for the Empowerment of Women in the Maritime and Maritime Sector. The plan has been consolidated and endorsed by the Ministry of Women and Family Affairs in Somalia (MoWFA) and is being implemented at Federal and Federal Member State levels.

“We are delighted to have reached this milestone, thanks to hard work and dedication, but also thanks to the fruitful collaboration and commitment of Somali institutions.” remarked Chris Reynolds, EUCAP Somalia Head of Mission.

The mission is undergoing a strategic review to assess progress and identify needs and areas of support for the next mandate, starting in January 2023, with the aim of continuing to consolidate its achievements in the coming years , to strengthen its mandate and foster the capacities of the police and maritime security sectors.

This press release was issued by APO. Content is not vetted by the African Business editorial team and none of the content has been verified or validated by our editorial teams, proofreaders or fact checkers. The issuer is solely responsible for the content of this announcement.

The European Union will phase out internal combustion engines by 2035