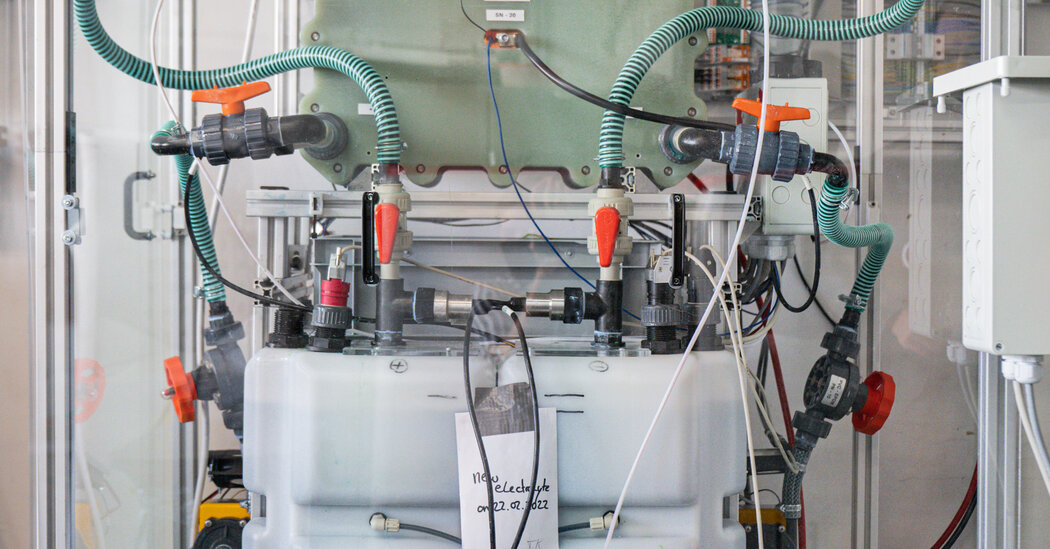 LONDON — When Jakob Bitner was 7, he moved to Germany from Russia with his parents and sister. Twenty-eight years later, he is determined to solve a thorny green energy problem that could help Germany end its dependence on imported energy from Russia or elsewhere.

The problem: how to make wind and solar power available 24 hours a day, seven days a week, even if the sun isn’t shining or the wind isn’t blowing.

The company he co-founded in Munich in 2016, VoltStorage, has had some success selling solar-powered storage batteries to homeowners in Europe. Now the company is developing much larger batteries – each the size of a shipping container – based on a chemical process capable of storing and discharging electricity for days, not just hours like today’s most popular battery technology.

These ambitions to overcome the unreliability of renewables dovetail perfectly with European goals to reduce dependence on fossil fuels. But Mr Bitner’s company faces a frustrating reality that threatens to undermine Europe’s plans and poses a wider challenge in the global fight against climate change: a lack of money to finish the job.

“Even though we’ve had some great early-stage investors from Germany and Europe who continue to support us, it’s becoming very difficult to raise the tickets we need right now,” said Bitner, referring to individual investments.

Europe offers a preview for the rest of the world. The European Union has aggressive targets to reduce greenhouse gas emissions, and there is broad political support for tackling climate change. The bloc poured public money into grants for the development of new technologies.

But after securing seed money or grants, companies struggle to raise funds for the kind of large-scale, innovative projects needed to complete the transition from carbon-intensive energy sources. The funding gap means Europeans face the prospect of either not meeting ambitious climate targets or further energy shortages and rising costs.

Solutions are available if given a financial boost, experts said. According to the International Energy Agency, nearly half of the emissions reductions to reach net zero goals by 2050 will come from technologies that are still in their infancy. There is, in theory, plenty of capital available around the world for the multi-trillion dollar task of financing this transition to greener energy.

Europe is moving away from fossil fuels

The European Union has started a transition to greener forms of energy. But financial and geopolitical considerations could complicate efforts.

The war in Ukraine has made Europe’s energy transition even more urgent. The European Union has said it will cut Russian natural gas imports by two-thirds this year and completely by the end of the decade. Although some of this supply is made up of imports from other countries, such as the United States and Qatar, the expansion of domestic renewable energy capacity is a key pillar of this plan.

But it’s hard to attract investors to projects that attempt to move beyond mature technologies like solar and wind power. Venture capitalists, once cheerleaders for green energy, are more enamored with cryptocurrencies and start-ups that deliver groceries and beer in minutes. Many investors are put off by capital-intensive investments. And governments have further muddy the waters with inconsistent policies that undermine their bold promises to cut carbon emissions.

Other interests of venture capitalists

Tony Fadell, who has spent most of his career trying to turn emerging technologies into consumer products as an executive at Apple and founder of Nest, said that while the world faces the risks of climate change, the Money is flowing into less urgent cryptocurrency developments, the so-called metaverse and digital art collections sold as NFTs. Last year, venture capitalists invested $11.9 billion in renewable energy globally, compared to $30.1 billion in cryptocurrency and blockchain, according to PitchBook.

Of the $106 billion invested by venture capitalists in European start-ups last year, only 4% was invested in energy, according to PitchBook.

“We have to get real,” said Mr. Fadell, who now lives in Paris and has offered energy policy ideas to the French government. “Too many people are investing in things that aren’t going to solve our existential problems. They’re just investing in quick money.

It didn’t help that the industry had previously been burned by a green tech boom. About 15 years ago, environmentally conscious start-ups were seen as the next big thing in Silicon Valley. Leading venture capitalist Kleiner Perkins Caufield & Byers has made former vice chairman Al Gore a partner and pledged clean energy will eventually make up at least a third of its total investments. Instead, Kleiner became a cautionary tale about the risks of investing in energy-related companies as the company missed out on early support from social media companies like Facebook and Twitter.

These old fears are proven to fade. Two years ago, 360 Capital, a Paris and Milan-based venture capital firm specializing in early-stage investments, launched a dedicated fund investing in clean energy and sustainability companies. The company now plans to open the fund to more investors, increasing it to €150m from a €30m fund.

There are a growing number of funds dedicated to energy investments. But even then, the companies that make them up tend to be software developers, deemed less risky than builders of larger-scale energy projects. Four of the seven companies backed by 360 Capital’s new fund are artificial intelligence companies and software providers.

Yet the situation has completely changed since the company’s first major investment in green energy in 2008, said Fausto Boni, the company’s founder. “We see potentially a lot of money coming into the industry and so many of the problems we had 15 years ago are being overcome,” he said. But the availability of larger investment needed to help businesses grow in Europe still lags behind, he added.

Breakthrough Energy Catalyst, which is backed by Bill Gates, is trying to fill the void. It was formed in late 2021 to help move promising technology from development to commercial use. In Europe, it’s a billion dollar initiative with the European Commission and the European Investment Bank to support four types of technologies – long-term energy storage, clean hydrogen, sustainable aviation fuels and direct capture of carbon dioxide from the air – which, according to her, must evolve quickly.

In Europe, there are “significant challenges with the scale-up phase,” said Ann Mettler, vice president for Europe at Breakthrough Energy and former chief executive of the European Commission. There is money for start-ups, but when companies become reasonably successful and a bit larger, they are often taken over by American or Chinese companies, she said. This leaves fewer independent companies in Europe focused on the energy problems they seek to solve.

Companies that build complex — and often expensive — hardware like Mr. Bitner’s batteries for long-duration energy storage, have especially struggled to find investors willing to take on the risk. After a few rounds of investment, companies are too big for start-up investors, but too small to attract institutional investors looking for safer places to store large sums of money.

“If you look at typical climate technologies, such as wind and solar and even lithium-ion batteries, it took more than four decades to go from the beginning of R&D to large-scale commercialization and the competitiveness of costs,” said Mettler, referring to research and development. “Four decades – which we obviously don’t have.”

There are some signs of improvement, including more funds focusing on clean energy or sustainability and more companies getting bigger investment rounds. But there is a sense of frustration as European investors, businesses and governments agree that innovation and the adoption of new technologies must happen much faster to significantly reduce carbon emissions by 2030.

“You won’t find a place in the world that is more responsive than Europe,” said Ms Mettler. “It’s not for lack of ambition or vision, it’s difficult.”

But investors say government policy can help them more. Despite climate commitments, the regulations and laws in place have not created strong enough incentives for investment in new technologies.

Industries like steel and concrete need to be forced into greener production methods, said Mr. Boni, the founder of 360 Capital.

For energy storage, hydrogen, nuclear power and other large-scale projects, the government should speed up permitting, reduce taxes and provide matching funds, according to Fadell, who put his personal fortune in Future Shape, which supports start-ups societal challenges.

“There are few investors who are ready to pull out all the stops to invest $200 million or $300 million,” Fadell said. “We need to know that the government is on our side.”