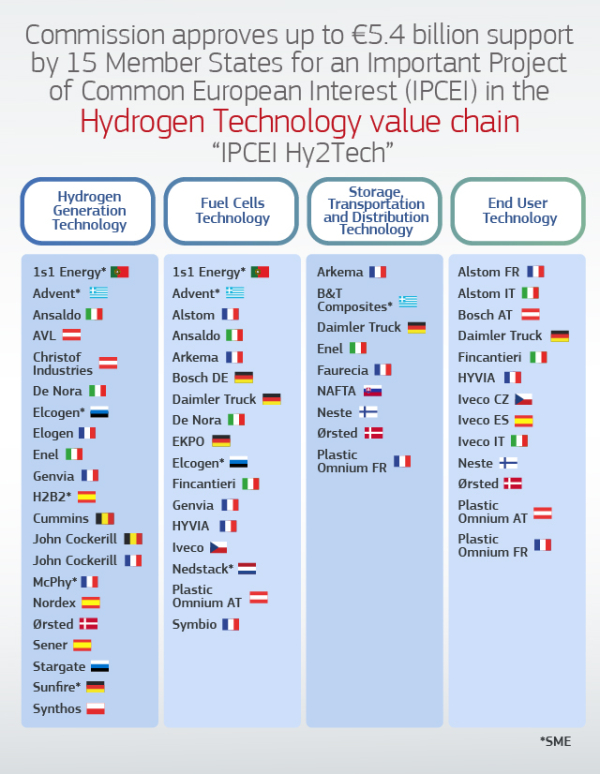 Member States will provide up to €5.4 billion in public funding, which is expected to unlock an additional €8.8 billion in private investment. Under this PIIEC, 35 companies with activities in one or more Member States, including small and medium-sized enterprises (SMEs) and start-ups, will participate in 41 projects. Direct participants will cooperate closely with each other in the many planned collaborations and with more than 300 external partners, such as universities, research organizations and SMEs across Europe.

Hydrogen has enormous potential for the future. It is an essential component of the diversification of energy sources and the green transition. Investing in such innovative technologies can however be risky for a Member State or a single company. This is where the state aid rules for the IPCEI have a role to play. Today’s project is an example of truly ambitious European cooperation for a key common goal. It also shows how competition policy goes hand in hand with disruptive innovation.

The IPCEI will cover a large part of the hydrogen technology value chain, including (i) hydrogen production, (ii) fuel cells, (iii) storage, transport and distribution hydrogen, and (iv) end-user applications, particularly in the field of mobility.

It should contribute to the development of important technological breakthroughs, including new highly efficient electrode materials, more efficient fuel cells, innovative transport technologies, among which the deployment for the first time of hydrogen mobility. The PIIEC should create approximately 20,000 direct jobs.

The Commission has assessed the proposed project under EU state aid rules, specifically its Notice on Important Projects of Common European Interest.

Where private initiatives supporting disruptive innovation fail to materialize due to the significant risks these projects entail, IPCEIs enable Member States to jointly fill the gaps to overcome these market failures. At the same time, they ensure that the EU economy as a whole benefits from the investments and limit potential distortions of competition.

The Commission found that the IPCEI Hy2Tech fulfills the requirements set out in its communication. In particular, the Commission concluded that:

The direct participants, the Member States supporting them and the different technology areas are:

Further information on the amount of aid to individual participants will be available in the public version of the Commission Decision once the Commission has agreed with Member States and third parties on confidential business secrets to be removed.

Background. The Commission’s endorsement of this IPCEI is part of the Commission’s broader efforts to support the development of an innovative and sustainable European hydrogen industry.

In 2018, the Commission created the Strategic Forum for IPCEI, a joint body of Member States and industry representatives. In November 2019, the Strategy Forum published its report and identified, among others, hydrogen technologies and systems as one of several key strategic value chains for Europe. In July 2020, the Commission published its European Hydrogen Strategy, setting ambitious targets for the production and use of clean hydrogen, and launched the European Clean Hydrogen Alliance, bringing together the European community of hydrogen (industry, civil society, public authorities).

Together with the political priorities defined in the European Green Deal, notably in terms of environmental sustainability as well as the green transition of the industry and transport sectors towards climate neutrality, these initiatives have played an important role for the objectives of the IPCEI Hy2Tech. and facilitated the creation of industrial partnerships.

The IPCEI Hy2Tech decision is the first IPCEI project approved on the basis of the 2021 IPCEI State Aid Communication, establishing the criteria under which several Member States can support transnational projects of strategic importance for the EU under Article 107(3)(b) of the Treaty on the Functioning of the European Union. The Communication aims to encourage Member States to support highly innovative projects that clearly contribute to economic growth, jobs and competitiveness.

The IPCEI Communication complements other State aid rules such as the Guidelines on Climate, Energy and Environmental Aid, the General Block Exemption Regulation and the Framework for research, development and innovation (R&D&I), which make it possible to support innovative projects while ensuring that potential distortions of competition are limited.

The IPCEI Communication supports investments for R&D&I and first industrial deployment provided that the projects benefiting from this funding are highly innovative and do not cover mass production or commercial activities. They also require extensive dissemination and dissemination commitments of new knowledge across the EU, as well as a detailed competitive assessment to minimize any undue distortion in the internal market.