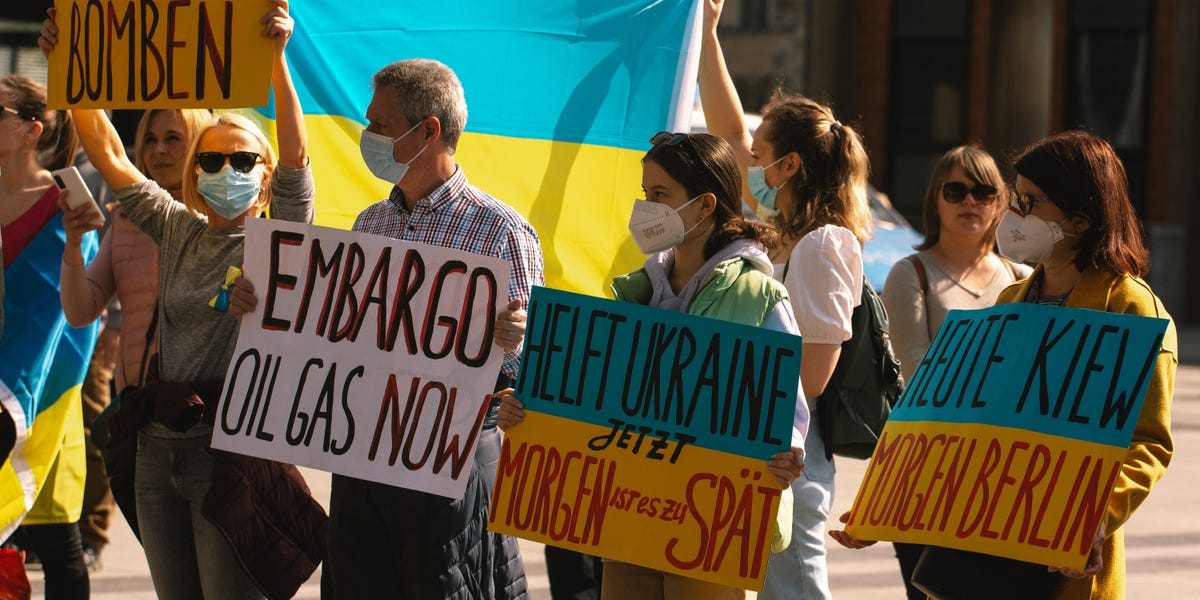 It was not until the tanks arrived in Ukraine at the end of February that Europe fully realized its dependence on Russian energy.

Germany Thursday abandoned his opposition to a Russian oil embargo. But implementing a ban on Russian oil imports is a political and economic nightmare for the EU.

That prospect has left the bloc scrambling to find alternative energy sources and to reach agreement on what an embargo would look like.

Europe ‘asleep at the wheel’ on Russian energy

The numbers are startling. In 2021, 25% of EU oil imports and 39% of its natural gas imports came from Russia, according to to the organization of the bloc’s official statistics. Last year, the EU imported over $100 billion worth of Russian energy.

Today’s high energy prices mean that Russia is still making big profits from its energy exports. The country exported more than $66 billion of energy since it invaded Ukraine, most of it going to the EU.

The problem is particularly acute for Germany, Europe’s largest economy. A third of Germany’s crude oil imports and more than half of its natural gas imports came from Russia last year, according to Reuters.

Now, however, Germany is turning to an oil ban. Officials have lifted their objections to an embargo, provided the process is phased, The Wall Street Journal reported Thursday.

The EU is expected to unveil new sanctions against Russia in the coming weeks. Action on oil could be included, but analysts said it is unlikely to come in the form of an immediate ban.

Politics is tricky. Hungary, whose leader Viktor Orban is closer than most to Putin, has already expressed worry on severe penalties. The EU – which is not known for acting quickly – must weigh the differing views of 27 governments.

A hunt for new sources

The race is on to find new sources of energy. The EU is aiming to be climate neutral by 2050 and is stepping up investment in green energy, but now realizes it hasn’t moved fast enough.

In the short term, the EU scrambles to find alternative oil supplierswith the United States and Middle Eastern countries being the most likely sources.

The OPEC+ group of oil-producing countries is slowly increasing production, and the United States and the International Energy Agency have announced they will release oil strategic reserves. This should make the offer more available in the coming months.

But avoiding Russian oil comes with high costs. By looking elsewhere for energy, Europe would increase its supply competition with China, potentially aggravating tensions with the world’s second largest economy.

“Renewables won’t happen overnight,” Hansen said. “The problem right now is going forward, which means you’re putting money into other sources. That’s when you could enter global competition with the Asia.”

Higher prices will weigh on economies

An economic slowdown in China, driven by its zero COVID policy, has reduced demand for oil and eased some pressure on global prices. But Beijing is keen to drive growth, and the country will continue to consume oil, gas and coal for the next few years.

“Later in the year it gets very tough in the rough markets,” Bronze said. He is waiting Crude Brent oil will reach around $120 a barrel later in the year. Still, he said prices would be very volatile and could rise much more than his base forecast.

Brent has already risen more than 40% this year, to around $109 on Friday, in turn raising the cost of gasoline and food.

The European economy is in trouble. Friday’s data showed eurozone inflation hit a record high of 7.5% on the year to April, while economic growth was just 0.2% in the first quarter. .

A further rise in energy prices risks worsening this combination of stagnant growth and high inflation, which economists call “stagflation.”

Optimists say the crisis will spur a green revolution, but others argue that governments realize how important oil and gas still are.

In the short term, there’s almost certainly more pain to come. After years of relying on Russian energy, Europe has no good options.