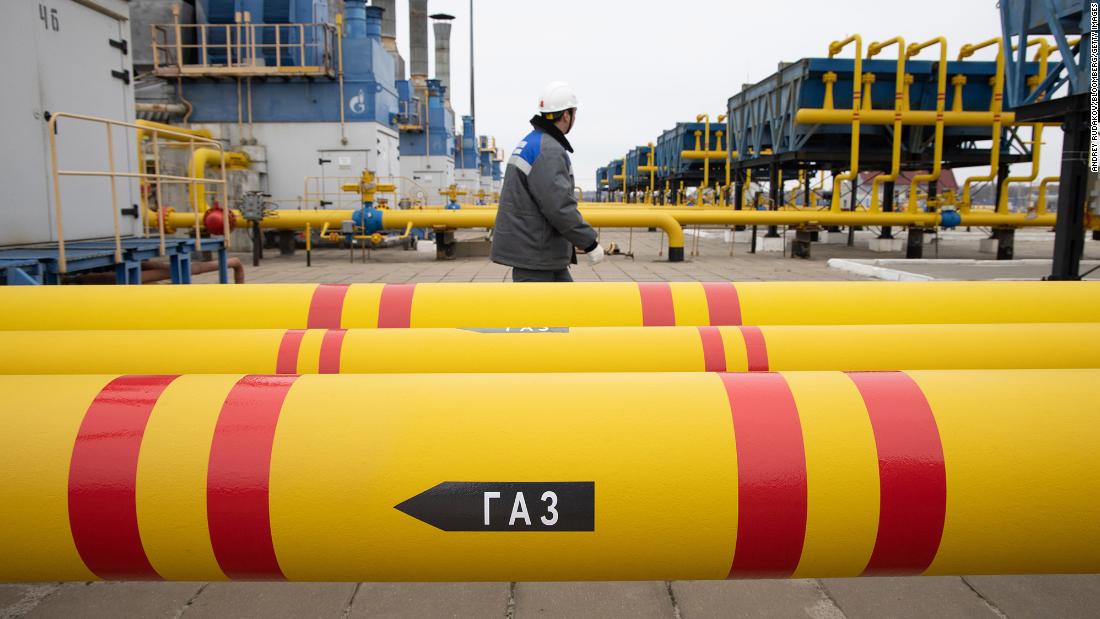 It’s only been a little over a week, but so far Russia has let the gas flow. But that poses another problem.

Russia earns hundreds of millions of dollars a day from its oil and gas exports, undermining financial sanctions Western powers introduced to choke off funding for Putin’s war effort. The European Union, Russia’s biggest gas customer, is now grappling with the reality that its energy spending helped Putin wage a bloody war on its borders.

According to European think tank Bruegel, with record prices, the value of Russian natural gas exports to the European Union has soared to around 500 million euros ($545 million) every day. That’s around 200 million euros ($220 million) in February. Prior to the invasion, Russia was also exporting oil worth hundreds of millions a day to Europe.

European leaders have been talking for years about reducing dependence on Russian gas. Polish Prime Minister Mateusz Morawiecki made that clear last week. “We buy, like [the] European Union, lots of Russian gas, lots of Russian oil. And President Putin takes the money from us, from the Europeans. And he’s turning that into aggression, into invasion,” he told an EU summit, according to reports.

For gas alone, the bloc of 27 countries depends on Russia for 40% of its needs. By country, Germany is Russia’s biggest customer, depending on the country for more than half of its gas, according to Bruegel.

In turn, Russia needs money from Europe. Russian oil and gas revenues in 2021 amounted to 9.1 trillion rubles, which in January this year converted to $119 billion, reports Reuters. This represented 36% of the country’s budget.

Moscow’s international reserves now stand at $630 billion, its highest level on record, which constitutes a huge war fund. But its financial firepower has been severely limited by Western sanctions, which analysts say have frozen about half of those assets.

These sanctions are hitting the Russian economy, but they have yet to directly target fossil fuel exports, so concerned are Western governments about soaring energy prices and the cost of living. Ultimately, they want Russian gas, at least, to keep flowing.

Oil is another story. As the price of benchmark Brent crude soared this week, trading at around $115 a barrel on Friday, Russia’s flagship Urals crude was offered at a discount of $18 a barrel, a sign that some buyers avoid it.

Banks and traders fear being caught in financial penalties, and shipping companies and insurers worry about the risk to tankers in the Black Sea.

Turning down the heat saves huge amounts of gas

Climate action advocates have for years been calling for a plan to wean the world off natural gas, which is a potent fossil fuel that warms the planet. It took an energy crisis and bloodshed in Ukraine to finally get the EU institutions going.

EU energy chief Kadri Simson said on Thursday that the bloc would publish its plan next week to reduce its dependence on Russian gas and to accelerate the adoption of more renewable energy.

“Beyond the short term, ultimately… the only sustainable solution is the Green Deal, which boosts renewable energy and energy efficiency as fast as technically possible. So we are still far too dependent on imports of fossil fuels,” she said at a press conference with the International Energy Agency.

Germany, which aimed to go 100% renewable energy by 2040, has already advanced its five-year target, since Russia invaded Ukraine last week.

The Ukraine crisis has also injected new urgency into conversations about whether the world can continue to use as much energy as it does. Europe should be able to replace part of Russia’s gas supply, but cutting it off completely just isn’t an option this heating season, experts have told CNN previously. Even in the end, the complete replacement of Russian gas will be difficult.

IEA executive director Fatih Birol suggested Europeans could turn down their thermostats as part of the solution.

Under a 10-point plan to reduce dependence on Russian gas, the IEA says if all buildings in the European Union reduced heating by just 1 degree Celsius, the bloc would save 10 billion cubic meters of gas. That’s about the same amount of natural gas New York City consumes in three months, or what Hungary consumes over a year.

In fact, asking people to do so would be somewhat of a last resort, said Ben McWilliams, climate and energy analyst at Bruegel.

“But who knows? It’s an unprecedented situation. I imagine a kind of political campaign, a real push from European leaders saying, look, if you can help us by lowering your thermostat by 1 degree, that will help. And you can see people uniting behind this, against Russian gas,” he told CNN. “But in the end, you will need much more than that in response.”

One approach would be to replace about half the gas from other sources, McWilliams said. The United States already ships liquefied natural gas (LNG) to Europe, and EU officials are also looking to countries like Azerbaijan and Qatar.

The other half will have to come from reduced demand, McWilliams said, especially as Europe prepares for next winter.

Heavy industries, such as steel and chemical production, will have to reduce their operations. Homeowners investing in solar panels and heat pumps could help reduce pressure on heating systems.

Tara Connolly, an activist with the international gas NGO Global Witness, says Europe must launch an emergency program to insulate homes, replace gas boilers with heat pumps and speed up the transition to energy renewable.

“It is abundantly clear that Europe’s gas dependence provided Putin with the resources to engage in his bloody business in Ukraine, while hampering Europe’s response,” she said. “This moment showed that fossil fuels are not only destroying the climate, they are contributing to a more unstable and dangerous world.”

CNN’s Charles Riley and Julia Horowitz contributed to this report.