European leaders have approved an unprecedented combination of energy subsidies and financial measures aimed at making the continent less dependent on Russian coal, oil and gas and, increasingly, it seems that the political will is building to make this permanent independence.

European Union heads of government on Friday voted to subsidize electricity and gas used by households and businesses this winter amid soaring prices.

They asked the European Commission, the EU’s executive, to propose price caps above which the subsidy would come into effect.

Governments would pay for it by recouping excess profits from power producers and gas importers.

Over the past year, gas prices have risen eightfold to 340 euros ($345) per megawatt hour last month, while electricity prices have tripled this year mainly due to rising hydrocarbon prices, the leaders said.

Greece tops the charts, spending 3.7% of its GDP to split electricity bills with consumers 50-50 – more than any other EU member.

The EU banned Russian coal imports last April in response to Russia’s invasion of Ukraine and followed up by banning Russian oil in June.

But he did not ban gas, which is difficult to replace with shipments to European ports.

Indeed, the global supply of liquefied natural gas (LNG) was already oversubscribed following the global post-pandemic rebound and transition to cleaner fuels, but this is also because some EU countries do not have LNG import facilities.

Germany and landlocked central and eastern Europe, in particular, depend on gas carried by Russian pipelines, which supplied around a third of the EU’s gas last year.

Russia has threatened to cut off this vital supply unless the EU lifts sanctions and halts arms deliveries to Ukraine.

“We are ready to supply gas in volumes that have already been contracted. However, this will certainly depend on the position of European countries,” Russian Security Council Deputy Chairman Dmitry Medvedev said on August 28. “If our weapons are twisted, if payments are prohibited, or the delivery of repaired turbines, or the launch of Nordstream 2 is rejected, then supplies of this type are unlikely to be in the volumes that Western countries expect.

Germany halted the certification process for the newly built Nordstream 2 gas pipeline on February 22, after Russian President Vladimir Putin ordered the dispatch of its first troops to eastern Ukraine. The pipeline was to begin delivering 55 billion cubic meters of gas to Germany this year.

And the sanctions have prevented German industrial giant Siemens from delivering gas compressor turbines to Russia after maintenance. Without them, Russia says it cannot pressurize the Nordstream 1 pipeline.

It halved streams through Nordstream 1 twice, on June 15 and July 27, before announcing it was shutting it down completely on September 3. Each time, Russian actions pushed up gas prices in Europe.

European leaders dismissed the Russian explanation that technical difficulties led to the shutdown.

“Putin’s gas war against Europe is a direct continuation of his war against Ukraine,” Ukrainian Foreign Minister Dmytro Kuleba said in July.

“Wherever he can hurt, he will. He will use every dependence of Europe on Russia to ruin the normal life of every European family. The only way is to fight back hard and get rid of any addiction.

Europe’s energy decoupling from Russia could cripple it this winter and many economists believe it will suffer a recession, mainly due to high energy costs.

“Europe does not have enough gas as a whole, despite having storages that are 85% full, because the question is whether you can get gas from where it is stored to where it is. is needed,” said Jonathan Stern, who heads the Oxford Institute for Energy. Studies.

“For example, France [which has LNG terminals] cannot supply Germany with gas because there is not enough capacity between them.

“Germany is supposed to bring an LNG terminal online at the end of this year in Wilhelmshaven, and another at the beginning of next year in Brunsbuttel. So there could be LNG imports in the second half of the year. winter, but only if everything goes according to plan,” Stern said. 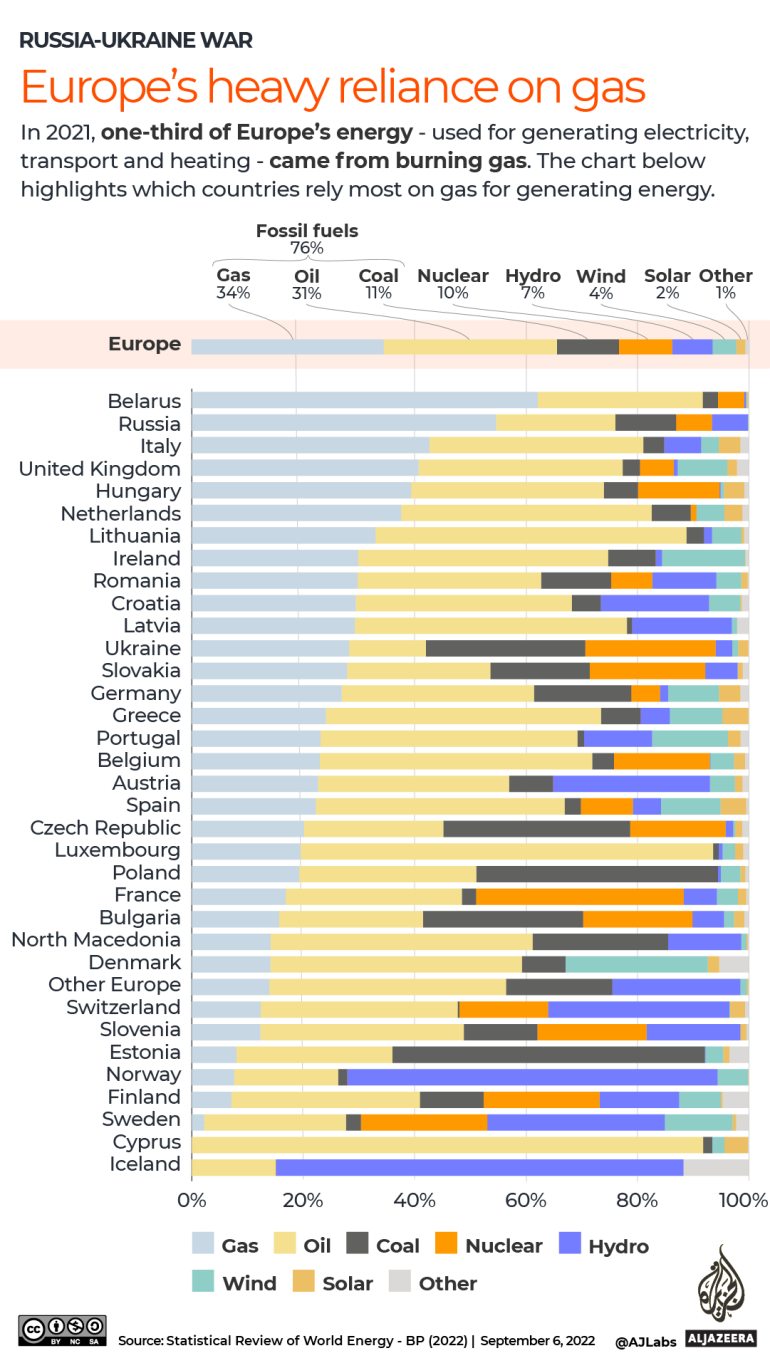 The cut off from Russia was not complete.

“About 10 billion cubic meters per year [bcma] are still flowing [through TurkStream]. The system across Ukraine operates at around 50-60 [percent] ability… [through which] we get about 25bcma. Total 35bcma… If this is closed, we cannot replace it,” Mathiolakis said.

The United States has promised an increase in LNG exports to Europe, but these depend on the capacity of the private sector.

Even Scholz isn’t quite sure he can keep Germany under pressure.

“We are ready and we can probably get through this winter,” he said on September 7.

A European Commission proposal to cut consumption by 15% has divided member states into those with import facilities and those without.

Despite the unknowns, the effects of energy decoupling on European politics seem clear, and the shutdown of Nordstream 1 seems to have marked a turning point.

In Germany, arguably the most Russophile member of the EU after Hungary, there seems to be a change of tide.

“Russia is no longer a reliable energy partner,” German Chancellor Olaf Scholz said at a press conference on September 4.

Three days later, he told the Frankfurter Allegemeine Zeitung: “Such dependence on a single supplier must no longer exist. We must be able to switch to other suppliers at any time.

In response to the question “Should we continue to support Ukraine despite high energy prices?” 70% of Germans answered yes in a Polit Barometer poll this month, representing overwhelming majorities of all parties in the Bundestag except the AfD.

Scholz recently acknowledged that “Germany has undergone a fundamental shift” in its support for Ukraine.

This is important because, by supporting the construction of Nordstream 2 for 12 years, Germany has been accused of not ignoring Ukraine’s concerns.

The operation of the new pipeline would have allowed Russia to gradually reduce gas deliveries to Europe via Ukraine, until now its main route, depriving this country of transit costs and leverage.

“It’s been a very, very steep learning curve for the Germans because they haven’t had any problems with Russia so far,” said Minna Ålander, a researcher at the Finnish Institute of International Affairs.

“They had this very profitable energy relationship with Russia, which allowed Germany to have the type of industry that they have without any of their own natural resources and which otherwise would not have developed.”

Other cuts were also turning points.

In May, Russia cut off gas flows to Finland and Bulgaria, apparently because they refused to pay in rubles.

“The speaker of the Finnish parliament said, ‘Once it’s cut, there’s no point in reopening it…it’s Russia’s loss,'” Ålander said. Bulgaria, once considered the most Russophile Balkan nation, has turned to Greece.

The two have just completed the construction of an interconnector that will allow LNG imported via Greece to be transported to Bulgaria.

The war in Ukraine is clearly propelling European integration.

The EU invited Ukraine and Moldova to open accession negotiations in June, a few weeks after applying.

Albania and North Macedonia, whose EU bids have stalled for years, are expected to be invited to start talks in December.

The EU’s largest members, France, Germany and Italy, are now turning to qualified majority voting to increase the efficiency of foreign policy decision-making.

The EU in March endorsed a strategic compass to build a rapid reaction force and command and control capabilities independent of NATO by 2030.

“Russia’s war against Ukraine, which was largely motivated by Ukraine’s wish to integrate into the EU, and the efforts that Ukrainians are willing to make and the high price that they are paying for a future in the European Union, underlined that there is really no good alternative for European integration,” Ålander said.

“Seeing Ukraine literally fight for their European choice kind of triggered a ‘renaissance’ of European identity.”

This winter will probably be very costly for the European Union, but its leaders seem to be expecting handsome political dividends next year.