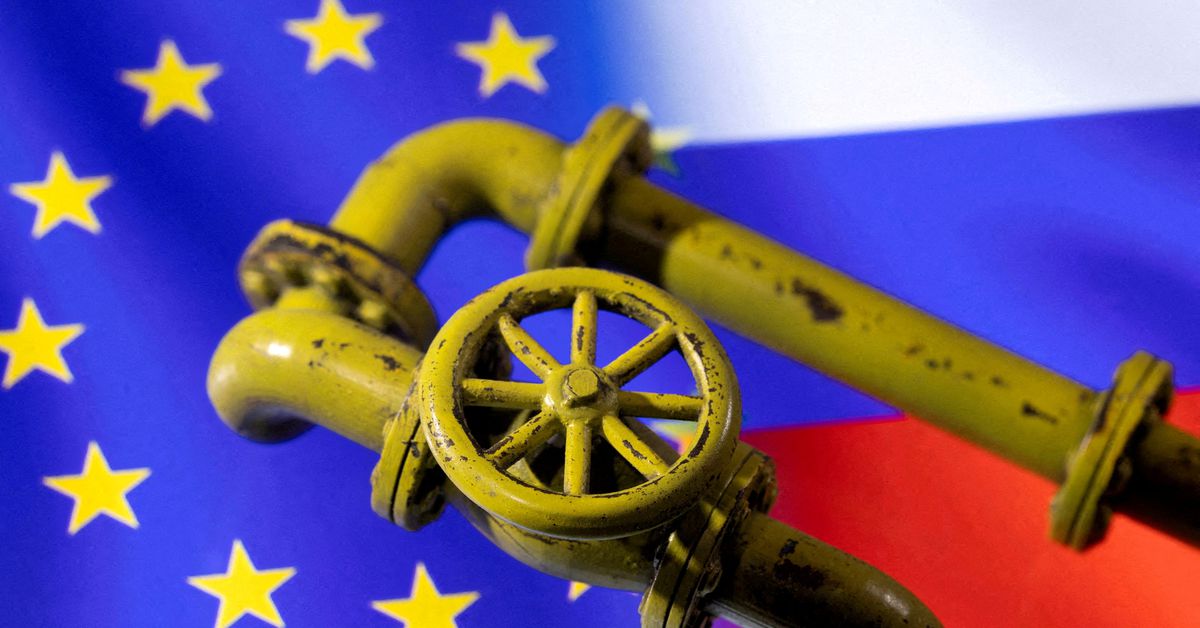 3D-printed natural gas pipes are placed over the EU and Russia flags displayed in this illustration taken January 31, 2022. REUTERS/Dado Ruvic

BRUSSELS, May 18 (Reuters) – The European Commission will unveil a 210 billion euro plan on Wednesday on how Europe can end its dependence on Russian fossil fuels by 2027 and use the pivot away from Moscow to accelerate its transition to green energy.

The invasion of Ukraine by Russia, Europe’s largest gas supplier, prompted the European Union to rethink its energy policies amid heightened fears of supply shocks. Russia supplies 40% of the bloc’s gas and 27% of its imported oil, and EU countries are struggling to agree on sanctions against the latter.

To wean countries off these fuels, Brussels will propose a three-pronged plan: a shift to importing more non-Russian gas, faster deployment of renewables and more efforts to save energy, according to plans of documents seen by Reuters.

The draft measures, which could change before they are published, include a mix of European laws, soft law regimes and recommendations that national governments could adopt.

Taken together, Brussels expects them to require €210 billion in additional investment – ​​which the EU plans to support by freeing up more money for the energy transition from its COVID-19 recovery fund, and which would ultimately reduce the billions of euros that Europe spends on fossil fuel imports every year.

The plans outline a near-term boost for non-Russian gas supplies, highlighting the potential for increased imports of liquefied natural gas from countries such as Egypt, Israel and Nigeria, as well as the infrastructure needed to move away of Russia.

Europe’s gas demand is set to drop by around a third by 2030 as part of the bloc’s targets to tackle climate change, and the proposals are set to set targets to produce 10 million tonnes of renewable hydrogen by 2030 and import another 10 million tonnes – which could be used to replace gas in industry, to avoid locking in years of emissions.

Other parts of the package include an improved law offering simplified one-year permits for some wind and solar projects, to cut the multi-year permitting times that delay projects. Read more

New EU programs to kick-start a large-scale deployment of solar energy would also try to reduce electricity and gas heating in homes, offices and factories, forcing countries to install the energy solar in all new public buildings from 2025, according to another plan. Read more