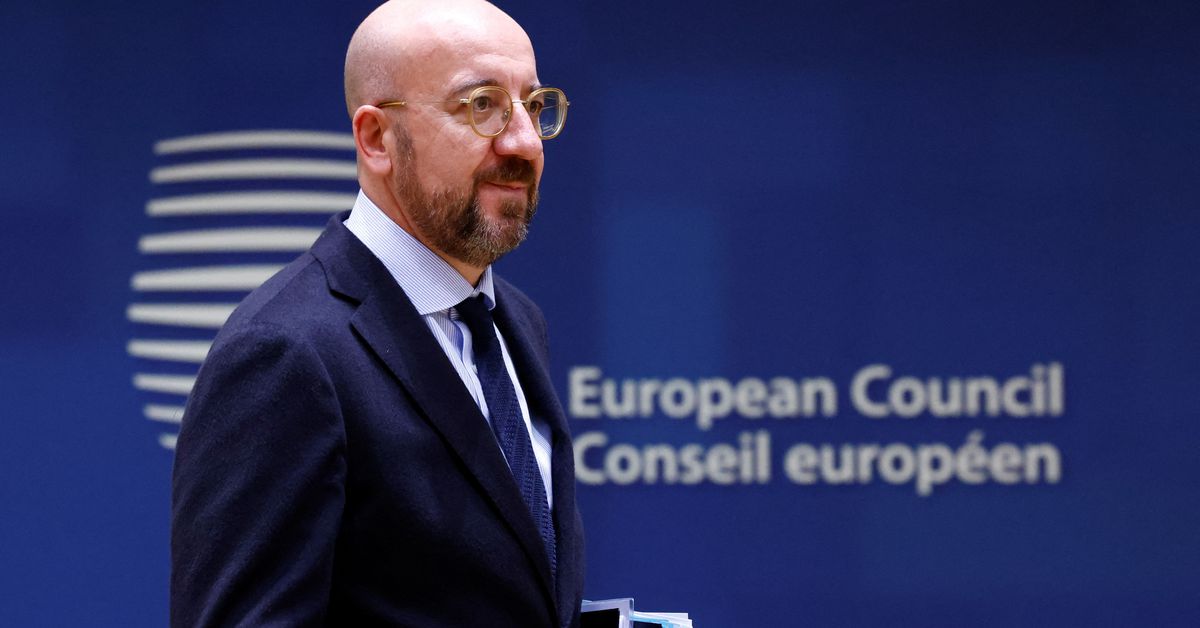 BRUSSELS, Oct 20 (Reuters) – European Union leaders ended another debate over the bloc’s response to the energy crisis without agreement on whether to cap gas prices, deciding in the early hours of Friday morning to continue to examine options for capping costs.

The EU is grappling with high energy prices that are fueling inflation and raising the prospect of recession across the continent, a situation made worse by Russia’s sharp cut in gas flows following its invasion of Ukraine in February.

The 27 countries have already agreed to fill gas tanks and claw back revenues from energy companies to help consumers pay crippling bills.

At a late-night summit in Brussels on Thursday, EU leaders finally backed proposals made by the European Commission this week to launch an alternative benchmark price for liquefied natural gas and the purchase Voluntary gas spouse, although laws to achieve this will have to be negotiated in the coming weeks.

But after weeks of negotiations between EU country leaders, ministers and diplomats on the subject, the summit ended around 2 a.m. in Brussels without a final decision on a European gas price cap.

“We now have a very good and solid roadmap to continue working on the subject of energy prices,” said European Commission President Ursula von der Leyen.

In the conclusions of their summit, EU leaders asked their ministers and the EU executive to “submit concrete decisions” on a “temporary dynamic price corridor on natural gas transactions” which limit price spikes, and a price cap on gas used to generate electricity.

This should include a ‘cost-benefit analysis’ of gas price caps for the power sector, according to the findings, reflecting some countries’ concerns that it could increase gas use or divert exports of electricity to non-EU countries such as Great Britain which do not have the cap.

Executives did not give a timeline for when decisions should be made on price caps. EU energy ministers will discuss the measures on Tuesday.

The hours-long row over energy prices reflected growing tensions between the countries over their joint response to Europe’s energy crisis. Many expressed frustration Thursday over Germany’s refusal to cap gasoline prices.

German Chancellor Olaf Scholz said the outcome of the meeting was a “good signal of solidarity”.

“We have defined precise guidelines on which the energy ministers can work out the concrete details, by unanimity. If that does not work, the Council (of the leaders of the EU countries) must work on it again But I obviously hope that the ministers will manage to find a unanimous agreement,” he said.

Germany, the EU’s biggest economy, leads a small camp that has so far resisted calls from 15 countries to cap gas prices, saying it would risk freezing Europe and reducing incentives to save energy.

“We are being asked to show solidarity in energy sharing, but there is no solidarity in our calls to contain prices,” outgoing Italian Prime Minister Mario Draghi told his peers, according to an EU official familiar with discussions behind closed doors.

“Solidarity should not only be about supply – it should also be about prices,” he told the rally, according to the official.

Spain and Portugal have already capped the price of gas used to generate electricity at national level, and France wants to extend the system EU-wide. Separately on Thursday, the two also agreed with France to build a maritime pipeline between Barcelona and Marseille.

Beyond disagreements over a gas price cap, leaders were also at odds over the spending plans of wealthier countries to help their industries and households through the energy crisis, which others are skeptical about. complain that they are unfair and undermine competition in the bloc’s single market.

EU leaders said the bloc should use national and European tools to support their economies, with common European solutions “where appropriate”.

This wording was weaker than an earlier draft of their conclusions, which had more strongly implied that EU leaders would consider joint borrowing to fund their response to the energy crisis – a move two senior EU officials demanded this month after Germany unveiled a mammoth financing plan. to support its economy.