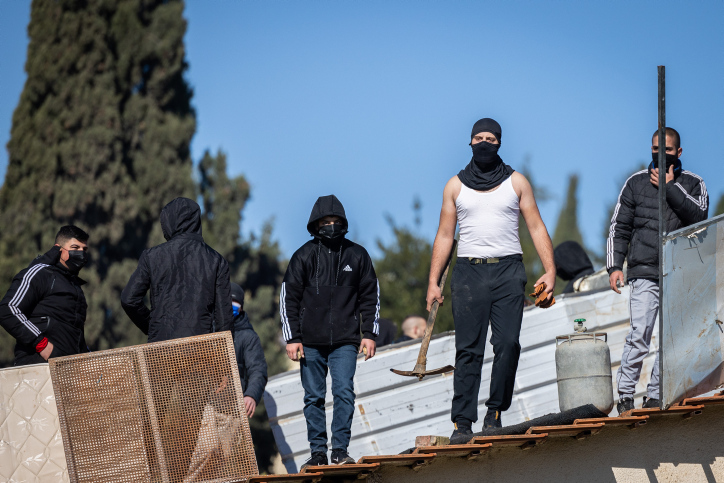 (January 18, 2022 / JNS) Israeli authorities attempted Monday morning to evict the Salhiya family, Arab squatters who have been living illegally since the 1950s in a house in the Shimon HaTzadik neighborhood of Sheikh Jarrah in Jerusalem. The day-long standoff ended without an eviction, although authorities destroyed a nursery on the premises as well as two illegal storage structures.

Video and photos from the scene show the Salhiya family standing on the roof of their house with gas canisters. Mohammed Salhiya had threatened to set himself on fire if the deportation order was carried out. “We will not be kicked out of the house,” he threatened. “Either we die or we live. I will burn myself!

Salhiya’s family has been facing eviction since 2017, when the land where her house stands was allocated by the city for the construction of a school. The Jerusalem Municipality and police said in a joint statement that the Salhiya family had ignored “countless opportunities” to vacate the land as ordered.

A delegation of European officials, led by European Union representative Sven Kühn von Burgsdorff, showed up in an apparent attempt to prevent the deportation. The official Twitter account of the European Union Delegation to the Palestinians said: “It is imperative to de-escalate the situation and seek a peaceful resolution. The evictions/demolitions are illegal under international law and significantly undermine the prospects for peace and fuel tensions on the ground.

According to Avi Bell, a professor at the University of San Diego School of Law and Bar-Ilan University School of Law, “the European Union’s accusation that Israel is committing war crimes in Sheikh Jarrah by moving forward with plans to build a language school for the special needs of Arab Israeli and Palestinian residents of the neighborhood shows that European officials harbor an equal disregard for common sense, international law and the Jewish state.

He accused the EU delegation of “trying to mask the bias displayed by its instinctive assault on Israel by making ridiculously inaccurate assertions about international law”.

The current area of ​​Sheikh Jarrah encompasses Shimon HaTzadik and Nahalat Shimon, which were separate neighborhoods in the late Ottoman period and Mandatory Jerusalem. Nachalat Shimon is a Jewish neighborhood built over 130 years ago on empty land and still entirely owned by Jews.

The British Consulate in Jerusalem also tweeted its concern and sided with Arab squatters while articulating false interpretations of international law. “Deportations to occupied territory are contrary to international humanitarian law in all but the most exceptional circumstances. The United Kingdom urges the Israeli government to put an end to such practices which only increase tensions on the ground.

The bottom line is: this is Jewish-owned property.

Even Internal Security Minister Omer Bar-Lev, who is no friend of the Israeli right, acknowledged Monday that the law was on Israel’s side.

“The court ruled that it was an illegal invasion [by Arab squatters]. The area is intended for the creation of classrooms and kindergartens for special education for the benefit of Arab children in the neighborhood. It is impossible to hold a stick at both ends, both to demand that the municipality act for the well-being of Arab residents and also to oppose the construction of educational institutions for their well-being.

Beginning in 1982, a number of Jewish homeowners took their cases to court claiming land and homes that Jordan had illegally confiscated in 1948. The Palestinians denied these claims, saying their homes had been legally purchased from Jordan.

Jordan, however, never legally owned the Sheikh Jarrah area, having confiscated it during its war with Israel in 1948 and ethnically cleansing its Jewish residents from the very homes that illegal Arab squatters now claim as their own.

A number of court cases are currently pending as Arab squatters in Sheikh Jarrah fight Jewish landlords for the rights to the homes they occupy. One concerns the Salem family, who are also facing eviction after squatting in a Jewish-owned home.

Eugene Kontorovich, a professor at Antonin Scalia Law School at George Mason who specializes in constitutional and international law, told JNS that the only reason the Salem family is there is because Jordan seized the property and let them live there. . In his opinion, this does not mean that they have a title there.

“At the end of the day, it’s: it’s Jewish-owned property,” he said.