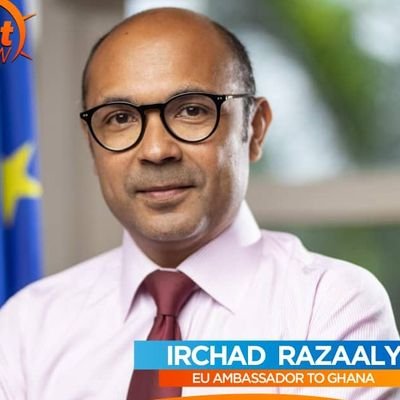 Speaking at a breakfast with editors in Accra on Friday, May 6, 2022, Mr Razaaly said Ghana’s recent removal from the EU’s money laundering list was indicative that the reforms implemented in the financial sector had produced positive returns.

“…I know it’s not a relief for people who pay 10 cedis for petrol, but the truth is that this work done over the years by the financial sector is making it more resilient and helping the economy to rebound because even (if) there is an economic downturn, the good news is Ghana’s economy is growing and rebounding in terms of GDP,” he said.

Ghana’s economy grew by 0.4% in 2020, mainly due to the negative impact of the COVID-19 pandemic on the economy.

This year, the government has forecast economic growth of 5.8%.

He said the war in Ukraine had disrupted global supply chains and assured that the EU would continuously support its partners to build their resilience to overcome the impact of the war on food security, health and social security. access to basic products.

“The EU in Ghana and elsewhere in the world will not decrease its financial support because of the situation in Ukraine,” he stressed.

Last month, the EU signed a €203 million agreement with Ghana under the multiannual indicative program for Ghana for 2021-2027 to create green jobs, build smart and sustainable cities and promote good governance and security.

Mr. Razaaly said disbursements have yet to be made but there are ongoing projects being implemented under the program.

The EU meeting with editors was facilitated by the Ghana Journalists Association (GJA) and was part of the Association’s activities to mark World Press Freedom Day 2022.

It was also part of activities to mark Europe Week in Ghana and Europe Day, which is celebrated every May 9 to commemorate a speech by French Foreign Minister Robert Schuman on May 9, 1950, which led to the creation of the European Coal Union. and the Steel Community the following year, leading to the formation of the European Union.

Mr Affail Monney, President of GJA, said the fallout from the ongoing Russian-Ukrainian war has underscored the need for journalists to hone their skills in solution-oriented journalism and be sensitive in their reporting.

Professor Amin Alhassan, Managing Director of the Ghana Broadcasting Corporation, called on media owners to provide resources to journalists and “pay them well” to improve their economic conditions.

“The poorly paid journalist is a threat to national security,” he said.