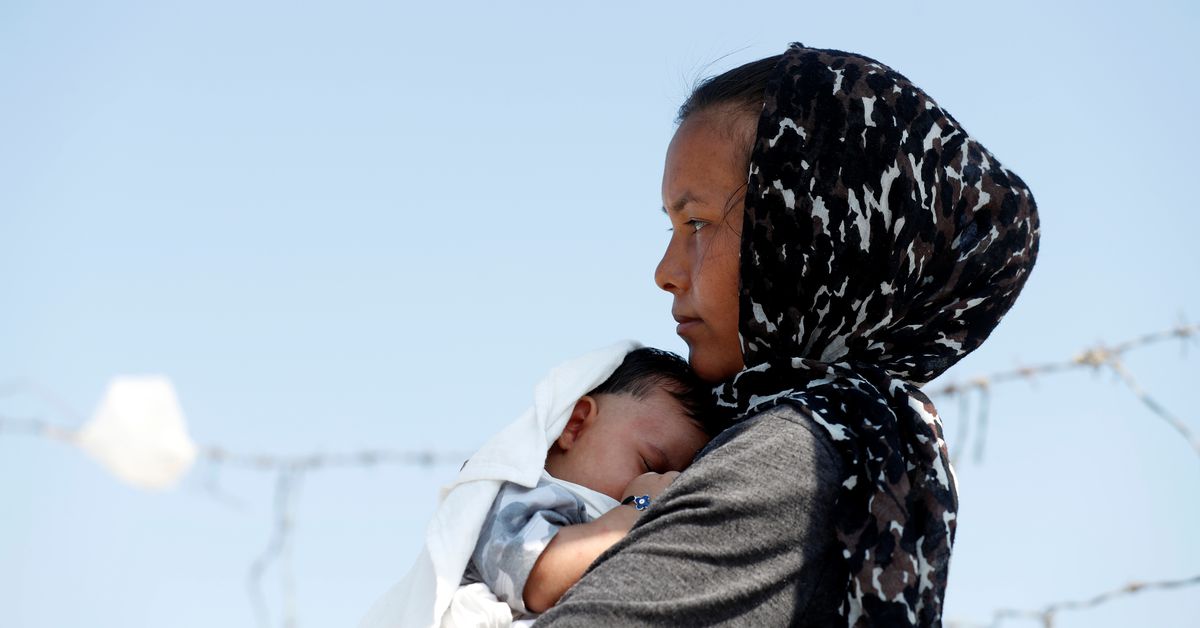 An Afghan woman and her one-month-old son are seen outside the new temporary camp for migrants and refugees on the island of Lesvos, Greece, September 21, 2020. REUTERS / Yara Nardi

BRUSSELS, Aug.31 (Reuters) – European Union countries on Tuesday announced they would step up aid to Afghanistan and its neighbors, but failed to agree on a common policy of reception of asylum seekers fleeing the Taliban regime.

Western countries involved in the fight against the Taliban airlifted 100,000 people who supported and would welcome them, as well as others who were unable to board the latest evacuation flights. Chancellor Angela Merkel said this group included up to 40,000 people with the right to reside in Germany. Read more

The question that divides EU countries is whether asylum should be extended by the bloc as a whole to other groups considered likely to suffer under the strict application of Sharia or the law. Islamic by the Taliban.

For many, the crisis is reminiscent of 2015, when more than a million people from Syria and other countries joined the EU, met with outrage from some member states, which rejected calls to welcome some asylum seekers. asylum in a gesture of solidarity from the EU.

“The best way to avoid a migration crisis is to avoid a humanitarian crisis” in Afghanistan, she declared after a meeting of the interior ministers of the member states. “Everyone would like to avoid a situation like the one we experienced in 2015.”

German Interior Minister Horst Seehofer, whose country has welcomed most of the new arrivals since 2015, said all member countries should play their part. But Austria, the Czech Republic, Denmark, Hungary and Poland opposed the reception of Afghans.

“Stay there – and we will support the region to help people there,” Austrian Interior Minister Karl Nehammer told those hoping to reach Europe.

Eventually, ministers decided that only EU countries willing to resettle people from Afghanistan, with particular emphasis on the most vulnerable groups of women and children.

The EU has half a billion people and needs immigrants to support its aging population. The bloc granted asylum to 300,000 people last year, Johansson said.

But the irregular arrivals of 2015-16 strained social and security systems, fueled anti-migrant sentiment and sparked feuds among member countries over how to provide for them.

Deadly attacks by radical Islamists in Paris, Brussels, Nice, Berlin and other cities have since fueled hostility in parts of Europe to predominantly Muslim immigration from the Middle East and Africa.

Falcons, including Poland and Hungary, have rejected welcoming refugees, saying they represent a security threat and a challenge to the traditional makeup of their societies, and that the issue of immigration has become highly Politics.

Since 2016, the bloc has fortified its external borders and increased its aid to countries like Turkey, Lebanon, Libya and Tunisia with the aim of removing migrants.

â€œBased on the lessons learned, the EU and its Member States are determined to act jointly to prevent the recurrence of uncontrolled large-scale illegal migratory movements encountered in the past,â€ the ministers said in a joint statement.

Johansson said the bloc was ready to quadruple humanitarian aid to Afghans, but development aid was on hold until the Taliban demonstrated sufficient commitment to women’s and minority rights.

The ministers’ statement gave no details on funding.

The EU hosts a tenth of the world’s refugees, equivalent to around 0.6% of the bloc’s total population.

Last year, 42,000 Afghans obtained legal protection in the EU. Afghans accounted for just over a tenth of the first asylum claims in the bloc, the second group after Syrians, and accounted for 8% of irregular entries, according to Commission data.

As millions of people have been internally displaced in Afghanistan and need humanitarian assistance, the International Organization for Migration (IOM) said it was difficult to estimate how many would leave the country. and the region for Europe.

Johansson said that so far there has been no exodus of Afghans.

EU has fully vaccinated 70% of adults against COVID-19, officials say