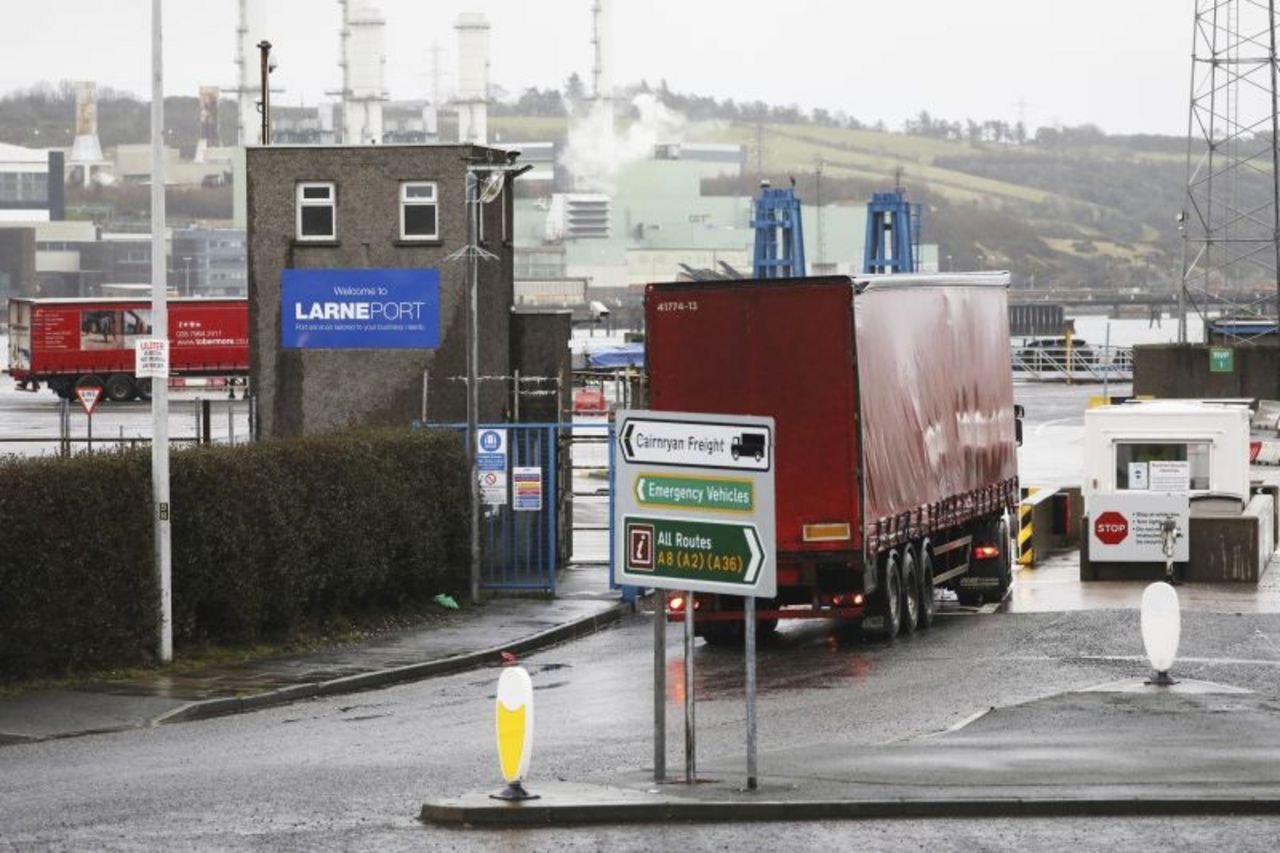 Political hostilities have again erupted between Britain and the European Union over the Northern Ireland Protocol.

Agreed as part of the Brexit deal reached in early 2020, the protocol governs the passage of goods between the UK and EU economic areas, where a hard border, or extensive border infrastructure, between Northern Ireland and an EU member state, the Republic of Ireland would jeopardize the 1998 Good Friday Agreement, which ended decades of armed conflict in the north.

Under the deal, Northern Ireland remains in the EU’s single market for goods from which the rest of the UK has withdrawn. EU product inspections and customs checks on goods arriving from the UK are carried out at ports in Northern Ireland immediately after crossing the Irish Sea and can then move freely throughout the UK. island of Ireland. This drew opposition from large sections of the Conservative Party and the Democratic Unionist Party (DUP) in Northern Ireland, who complained that a border had indeed been established in the Irish Sea.

Prime Minister Boris Johnson endorsed the 2019 deal in that year’s general election as a way to ‘get Brexit done’. But antagonisms have since erupted, with the deal threatened by both sides earlier this year and the EU briefly invoking Article 16, which allows one party to unilaterally suspend elements of the deal.

Since then, talks aimed at defusing the situation have only highlighted the national tensions between Britain and the EU, at a time of growing tensions within the European Union itself.

UK Brexit Minister Lord Frost has called for the protocol to be scrapped and all customs controls between Britain and Northern Ireland removed, allowing goods to move freely if they comply with regulations British or European. He also wants the European Court of Justice (ECJ) to be withdrawn from arbitration of future disputes over the agreement, demanding “international arbitration instead of a system of EU law ultimately controlled by the court of law. one of the parties, the European Court of Justice “.

EU chief Brexit negotiator Maroš Šefčovič on Wednesday offered a series of concessions to the UK’s position, including measures to cut controls on UK retail products by 80%, to cut customs formalities in half, drop the requirement for manufacturers of medical products to leave Northern Ireland for Great Britain and streamline the certification process for road freight. He said the EU had “completely changed our rules” to find an agreement. He insisted: “It is very clear that we cannot have access to the single market without the supervision of the ECJ.

Discussions on the EU’s proposals will last a maximum of three weeks. Commentators have referred to the adoption of a Swiss-style treaty as a possible final compromise. Disputes between Switzerland and the EU are handled by an independent arbitration panel, although it must take into account the opinion of the ECJ on questions of EU law. But the comments suggest Britain will demand “the moon,” in the words of an EU diplomat addressing the Financial Time (FT).

On Wednesday, the day Šefčovič announced his proposals, Johnson’s former senior adviser and current political foe Dominic Cummings tweeted that the government had signed the Brexit deal providing for ‘ditching the pieces we don’t’ didn’t like after knocking [then Labour leader Jeremy] Corbyn [in the 2019 general election]. He continued: ‘Our priorities meant, for example, that achieving Brexit is 10,000 times more important than lawyers yapping at international law in negotiations with people breaking up [international] law all the time.

Cummings’ account was later confirmed by DUP chief MP Ian Paisley. He told the BBC Newsnight, “Boris Johnson told me personally that he would commit, after accepting the protocol, to modify this protocol and tear it up, that it was just for the sake of semantics.”

Frost admitted, enigmatically, that the UK only accepted the supervision of the protocol by the ECJ “because of the very specific circumstances of this negotiation”.

Preparations are already underway in Europe for a trade war if Britain rejects the EU’s proposals and triggers Article 16. According to the FT, representatives from France, Germany, the Netherlands , Italy and Spain met with Šefčovič on Monday to demand contingency plans including tariffs on UK exports, restricting UK access to EU energy supplies and ending the trade deal between the two parts.

An EU diplomat told the FT: “Frost knows he’s playing with fire. But when you play with fire, you get burned. The EU has a wide range of options to fight back in the UK ”.

Britain’s rationale for pushing a conflict with the EU is more openly expressed in the The telegraph of the day. Columnist Nick Timothy accuses the EU of “playing with fire on the Northern Ireland protocol”. He writes: “The problem is… sovereignty. The government cannot allow the maintenance of the jurisdiction of the European Court of Justice over the NI protocol.

The UK government believes “sovereignty” is a stick with which it can successfully beat the EU, in light of last week’s ruling by the Polish Constitutional Court that parts of EU law are ” incompatible ”with the Polish constitution, overturning the fundamental rule of EU law. within the union. Poland was supported by Hungary, which is also engaged in a long-standing legal dispute with the EU over legislation linking EU grants to respect for the rule of law.

The Brexiteer press in the UK has also made much of recent statements by Michel Barnier, the EU’s former chief Brexit negotiator. Barnier is now embarking on the French presidential race on a fiercely anti-migrant platform, calling for France to recover its “legal sovereignty” by getting rid of the threat of an “arrest or conviction at the level of the European Court of Justice or the European Convention on Human Rights ”.

Johnson rejoiced at last week’s Conservative Party conference: “This is what happens if you spend a year trying to argue with Lord Frost.”

These events are evidence of the Socialist Equality Party’s analysis of Brexit as “the most advanced expression of a growing collapse of the EU, under the pressure of growing centrifugal forces which intensify non-conflict. only with the United States but between European States. . “

The Johnson government identifies with this development. He hopes to use Brexit to place himself in pole position among European nations pursuing increasingly independent policies, either within a crippled EU or after breaking away from it. Senior Tory Brexiteer MP Sir Ian Duncan Smith quoted Lord Palmerston in the Telegraph Thursday: “We don’t have eternal allies, and we don’t have perpetual enemies. Our interests are eternal and perpetual, and these interests it is our duty to follow ”.

At the heart of this policy is the UK’s position towards the US as the most trusted ally. But this journey is fraught with uncertainties. Brexit policy in the British ruling class has been spurred on by the presidency of Donald Trump, who has clearly expressed his hostility to the major European powers, Germany and France. Under President Joe Biden, the United States took a more subtle approach.

The September AUKUS military alliance between the UK, US and Australia, involving the repudiation of a submarine deal between Canberra and Paris, strengthened Johnson’s position in Washington. But Biden has always said his administration will react harshly to any UK decision jeopardizing the Good Friday deal. He is also more determined than Trump to win European support in escalating conflict with China.

The outcome of the dispute over the Northern Ireland Protocol is therefore tied to the calculations made in the increasingly frenzied war campaign in Asia-Pacific. Combined, these geopolitical tensions threaten an explosion of trade and military conflicts. They cannot find any solution within the framework of imperialist policy. They can only be fought by the development of a unified socialist movement of the European and international working class against nationalism, war and the pursuit of profit rather than human needs.

Great Britain leaves the European Union: Against nationalism, For the socialist United States of Europe!