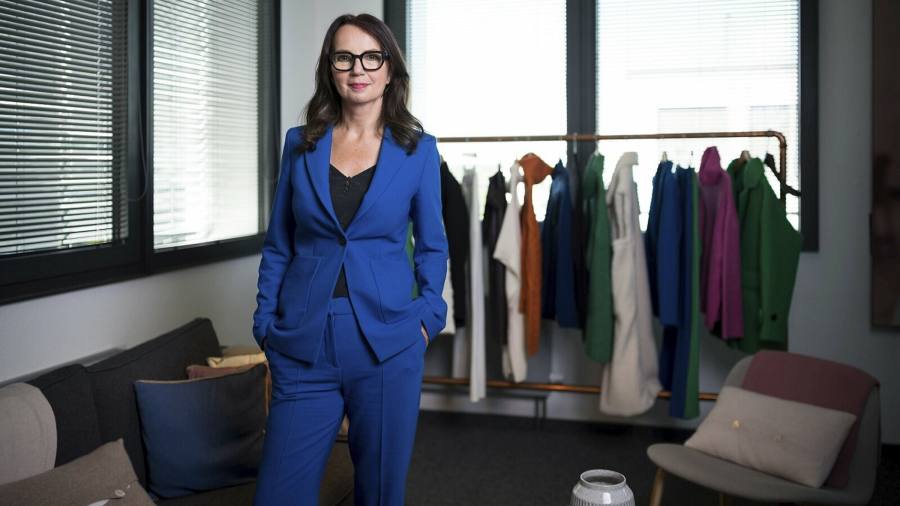 C&A’s Giny Boer: “What we want to do now is democratize sustainable fashion”

When Giny Boer joined C&A Europe two years ago, after 23 years selling furniture and homewares at Ikea, she found a retailer that badly needed the kind of refresh her former Swedish employer promises. its customers who make the house.

C&A, founded in 1841 by young Dutch brothers Clemens and August Brenninkmeijer, operated 1,400 stores in 18 European countries – but they came in very different sizes and layouts, including four-storey stores that had long outlived the tastes of consumers. Boer found 12 different versions of the company’s famous oval logo scattered around the group.

She arrived at the group’s headquarters in Düsseldorf as European retailers were going through their most disruptive time since World War II, moving in and out of the Covid-19 pandemic shutdowns. At first, only the management team was in the office – and most of them were only there to meet their new boss. She was able to visit some of the group’s stores in Germany, but for weeks she was above all a virtual presence with her new colleagues.

During an interview during a lunch in Luxembourg, where she is due to speak at an FT event, the 59-year-old Dutchwoman repeatedly insists on her pragmatism. While studying developmental psychology in the 1980s, for example, Boer noticed that economists went straight into jobs while psychologists were lacking. She began studying economics at night, while working as a saleswoman in a clothing store, and went straight into business.

Faced with the constraints of the pandemic, Boer took an equally practical approach. The online interviews allowed her to talk to many people and absorb a lot of information about the challenge she was facing. “I could talk to people and I had facts. . . without any noise,” she said. By the time she took over as chief executive in December 2020, she had filled four A4 notebooks with her observations.

One fact was that C&A lacked online sales because its digital approach was underdeveloped: its single logistics hub could not keep up with demand. Another was that it lacked a unifying concept. As managing director, Boer quickly lobbied to open two more distribution centers and implemented a “One C&A” program of store rationalization and renovations. “We said, ‘We have to do something fast’ — after a year, people should feel when [they] walk into C&A that something happens,” she says.

Four hundred shops have already been revamped. For example, on Berlin’s Kurfürstendamm, the German capital’s historic shopping street, the nearly 5,000 m² three-storey C&A store has been transformed into a more airy and trendy shopping hub. The rest of the store portfolio will be “tuned” into large, medium and small formats (some as small as stores within stores), with the first part of the transformation completed by 2024.

As a business still owned by privately held Cofra Holding des Brenninkmeijers, C&A does not release detailed sales figures, but compared to 400 benchmark stores, sales of the new format are up and footfall is up 8 %. Workers are also happier, as outdated back rooms and rest areas have been redecorated and revamped.

These are easy wins. Yet even as the pandemic wanes, Boer faces a combination of structural and cyclical pressures. A few kilometers from the place of our interview, in Bertrange, is a C&A of 2,100 m². The store on the ground floor is typical of the “medium” format, but remains to be renovated. In the same mall, it clashes with brighter, more modern H&M and Zara stores, with merchandise prices to compete with C&A’s budget and premium ranges, respectively. All three are headed for a cost-of-living crisis the likes of which retailing hasn’t seen in most countries since the 1970s. How can Boer differentiate C&A’s offering, in-store and in-store? online, where price comparison is even easier?

When I started, [C&A] has been . . . very masculine, very bureaucratic, lots of layers. So I thought. . . how to become more accessible?

In interviews with colleagues who filled in her notebooks, Boer was pressured to do more online, but few staffers referred to competitors by name. Instead, he was repeatedly asked, “Who do you want us to be?” His gnomic response – “I want us to be us” – seemed to satisfy the staff. Boer says they were tired of having to switch from budget to premium strategies and back again under successive chief executives. Range and price are among the most important strategic decisions C&A has to make, she says, but adds “you can’t just pull off the hip and do what I think is important. It does not work. So everyone was so relieved that I wasn’t going from left to right.

“In many ways, C&A has suffered from impostor syndrome,” adds Allan Leighton, veteran retailer who chairs C&A. “He’s been trying for the last 20 years to be something else, while he has his own identity, which is a huge success.”

A second common criticism that Boer distilled from his notes was that senior managers needed to communicate better. “When I started, [C&A] has been . . . very masculine, very bureaucratic, lots of layers. So I thought how do we do that? How to become more accessible. . . not like a CEO sitting there in an ivory tower?

Boer has implemented various initiatives to meet this need. They include a monthly “Let’s Connect” session, where people from across the company sign up to ask questions of the managing director and her human resources manager, whom she hired from Ikea, regular updates and town hall meetings, and a bi-monthly “Failure Friday” meeting. At this latest event, three staff members share their experiences of failure with staff online, as part of an effort to encourage a culture where people dare to speak out.

Boer says it would be an overstatement to say she is building on her early insights into psychology by flattening the hierarchy and encouraging more transparency. She has, however, always had “a huge interest in people: how can you get the most out of [them]? How can everyone become the best of themselves? So how do we create a culture at C&A where everyone feels better, so they can perform at their best? »

Given the competition, the poor economic outlook, and the scale of the turnaround it’s trying to achieve, it’s easy to wonder if a change in culture alone will be enough to revive C&A. At least Boer has the advantage of being able to make his changes under the guise of private ownership. Although she’s reluctant to compare working for Ikea, also family-controlled, with the experience of working with the Brenninkmeijers (“really supportive but not interfering”), she says she likes the “long-term thinking” that families apply to their businesses.

It’s one of the reasons, says Boer, why the family owners of Ikea and C&A have put environmental goals at the top of their priorities. This is one of the pillars of its nascent strategy, the details of which it prefers to keep secret.

Who is your leadership hero?

I have many different ones, but I don’t like to copy someone. You learn different things from different leaders/people. My hero today is my boss Allan Leighton.

What was the first leadership lesson you learned?

Always explain why and direct through people.

What would you be if you weren’t running C&A?

I will always be Giny – a mother, a partner, a sister, a friend, a daughter.

Even when customers are increasingly looking for better prices, she says C&A won’t compromise on durability; however, always pragmatic, she may have to adapt. For example, the group brings certain supplies closer to the customer. He owns a highly automated denim factory in Mönchengladbach, Germany, where the machines damage the fabric with lasers rather than washing the stone with water.

“What we want to do now is democratize sustainable fashion,” says Boer. “So it shouldn’t be a choice and a difficult thing for our customers.” Building on its heritage of affordability, C&A should be able to continue to offer “everyday low prices”, she says, inadvertently echoing the slogan used by Walmart and its former UK subsidiary Asda, where Leighton once was. general director.

She credits the “good chemistry” she has with her chair, which in turn describes Boer as a “breath of fresh air.” Leighton says she brought humility, kindness and vulnerability to the job as well as the “shining eye” of a great retailer. At the FT event later, she told the mostly female executive audience to “be yourself, believe in yourself, enjoy what you do and deliver.”

At C&A, she may be making up for lost time. When asked what she could have confessed to Failure Friday, she ended up admitting that she had stayed too long at Ikea. “If you are in a culture, you hardly dare to think outside. . . When you go out and see that you can learn again and how much you can give too, it gives [you] so much energy.